How to Throw the Best Tailgate Party Ever

Football season is here, and you know what that means: pregame tailgating. Nearly as important as the games themselves, tailgating is a ritual with one rule: go big or go home—hungry. While you might not be able to control the outcome on the field, outside the stadium you have what it takes to be a pro bowl barbecuer. Well, you and every other pigskin-loving party boy out there.

To stand out from the pack, do like many NFL teams and buy your way to greatness by upgrading your pre-game spread with one (or more) of these gadgets.

A battery pack to kick off your tech blitz? You better believe it. Between checking all the scores, watching all the highlights, and Instagramming your game day war paint, even a Vince Wilfork-sized smartphone could run out of juice before the first quarter.

With the ability to charge an iPhone 6 more than seven times, the Anker PowerCore 20100 has enough power to not only top up your handset, but also to ensure all your buddies are at the top of their game. About the size of a glasses case, the $40 portable battery is light in the pocket and on the wallet, which means more more snacks.

There isn’t a player in the league with as many tools as The Coolest, a cooler that’s as much a high-tech gadget as it is an ice chest. Packing a blender, a Bluetooth speaker (that can link with another Coolest speaker for a “party pairing” mode), a USB charging port, an interior LED light, and a 20-volt lithium ion battery, it practically has more technology than the stadium’s media box.

Throw in extras like a divider cutting board, a ceramic knife, pack-away plastic plates, a corkscrew, and a bottle opener (with magnetic cap catcher), and you can see why this rolling party is backordered until the end of the year. Costing $485, The Coolest might be tough to fit in under your salary cap, but it has the potential to be a game changer.

Grilling up great-tasting meat takes patience, timing, and the right amount of heat. And when you lift the lid of your barbecue to check on the the status of your vittles, you pretty much lose all of those things at once.

This Bluetooth-connected, $40 grilling thermometer lets you monitor the inside temperature of your creations without having to blitz your grill every five minutes. Pairing with a smartphone app, the probe sends the temperature over to your iPhone, which can be set up to receive alerts based on the food’s status. And with a 150-foot range, you won’t be chained to the grill all party long. Maybe you can even go to the next truck over and tackle a game or two of cornhole.

Small, portable Bluetooth speakers are very popular these days, and they’re great if you want to amp up a squad of Pop Warner players. But if you want to get a crowd full of beer-drinking, burger-chomping football fans fired up, you’ll need the 50 watts of power that the Block Rocker is packing.

Easily pairing via NFC (for equipped Android handsets), this hulking $199 Bluetooth speaker system has an 8-inch woofer and a wide dispersion tweeter to hit all the highs and lows (kind of like the Patriots since the Super Bowl). A panel with buttons—not a touchscreen—makes it refreshingly easy to use, and with AM/FM presets, you can even air the pre-game radio show. Or maybe you’d rather lead your fellow fans in a cheer—the Block Rocker comes with a microphone for that very occasion.

Tailgating may be all about fun fare and inventive eats, but I can already tell you’re turning your nose at this chilly take on beer. Stop right there—it’s not what you think. Whipping up beer into an agitated state, this $92 beer slushy maker is huge in Japan, home to the Kirin Ichiban beer company that invented this device.

Once frozen, these frothy suds are dispensed on top of a regularly-poured brew, giving it an icy cap. And since heat rises, the frozen top layer helps keep your beverage colder, longer. Roll this out at your next tailgate, and your party will be as big of a hit as J.J. Watt.

Want to stand out from the competition? Take a look around at the next pregame, and list off what you see: steak, burgers, sausage, and other fired-roasted meats. Break free from the pack by serving up pizza, and you’ll turn into a pregame legend.

Pre-heating in just 10 minutes and reaching a scorching 700 degrees (what you’d cook at that temperature, I can’t imagine), this propane-powered oven cooks 14-inch pizzas on a hollow-core pizza stone that helps crusts bake evenly and crispy. Weighing in at 26 pounds, the $299 Pronto is portable enough to let you set up shop on the road, but big enough that it won’t walk off during the game. And cooking up a pie in five minutes, you’ll score plenty of points with your friends. 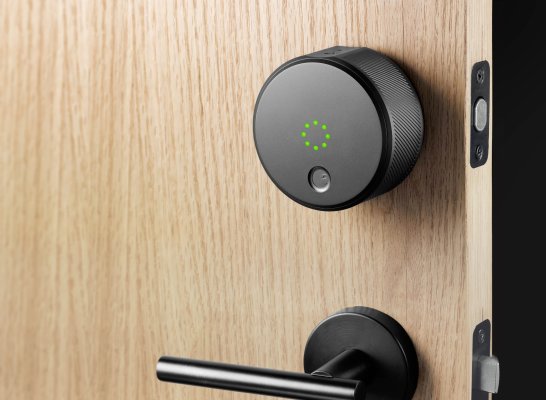 Does This Smart Lock Mean the End of House Keys Forever?
Next Up: Editor's Pick