Last Thursday, the Marine Corps released a summary of a study contending that combat units mixing men and women together performed more poorly than all-male units. This will likely be cited as evidence by the corps in an effort to open up all combat slots to U.S. servicewomen early next year.

With the release of these dismal initial research findings, the Marine Corps has tested the bounds of credulity. This is a service that has historically limited the success of women through lowered standards and expectations.

There is no denying that the young women who participated in the study deserve a lot of credit: They subjected themselves to an incredible degree of scrutiny, pushed themselves past their perceived mental and physical breaking points, and became the embodiment of our core values of honor, courage, and commitment. But to have expected women to succeed in the study would have demanded that the participants have faced the same high performance standards from the very beginning of their Marine Corps service.

The results of study speak to the dangers of the Golem effect. Research has shown that when less is expected of a specific group, less is exactly what they will achieve. For decades, women in the Marine Corps have been subject to lower performance standards, starting at recruit training. The passive acceptance of second-rate results for women flies in the face of the mythical characterization of the Marine Corps as the most elite of all of the services.

Although female recruits have historically underperformed in every quantifiable category at boot camp, the Marine Corps has never acknowledged this to be a fundamental obstacle to the success and credibility of female Marines. Ultimately, the impact of lowered expectations for female performance at boot camp were reflected across the spectrum of the study’s results.

With such lackluster performance from female recruits on the rifle range, it should not be surprising that the female participants in the study were outshot by even the non-infantry male Marines. If the majority of the study’s female participants graduated from boot camp within the past five years, it is fair to assume that as recruits they were held to lowered expectations for performance on the rifle range, which then impacted their shooting performance in the study.

The same is true for lower physical fitness expectations for female recruits. From the time they meet their recruiters, women are generally not held accountable for making improvements to their physical fitness ability. As a result, the initial strength test failure rate at boot camp is nine times greater for females, while their average physical fitness test scores are lower than those of their male counterparts.

The gender normed physical fitness test allows women to settle for mediocrity while their male peers are held to more stringent standards including dead-hang pull ups and a faster three-mile run requirement. Considering these disparities, it should not be a surprise that men would outperform the women in the study, nor should the female lower extremity injury rate be considered startling.

The Marine Corps force integration plan summary touts the fact that the recruiting force has seen a 4.5% increase in female enlistments since 2008. But does an increase of women in the Marine Corps really equate to talent management if the women are simply expected to do less? No matter how many women there are in the Marine Corps, if low expectations for performance are maintained, women will never measure up to their male counterparts in any capacity, much less the field of infantry.

Over the past year, many male Marines voiced concerns that the Marine Corps would lower standards in order for females to qualify for the infantry. However, to be fair, male senior leaders have perpetuated lower standards for female conduct and performance in the Marine Corps since the first women were recruited. We have simply become what our leaders allowed us to be.

Regardless of the final decision on women in the infantry, if we ever expect female Marines to truly be valued and highly regarded in a male dominated organization, senior leaders must be willing to banish the notion that lowered expectations for female performance are acceptable and necessary. Only then will we truly be “The Few, The Proud.”

Kate Germano is a Marine lieutenant colonel. She was relieved of command of the corps’ only female-recruit training unit in June for what her superiors said was a poor command climate. Her supporters contend she was fired for her insistence that female Marines meet the same standards as their male colleagues. Germano has filed a complaint alleging discrimination with the Pentagon. These views are hers, and not necessarily those of the Marine Corps or the Department of Defense. 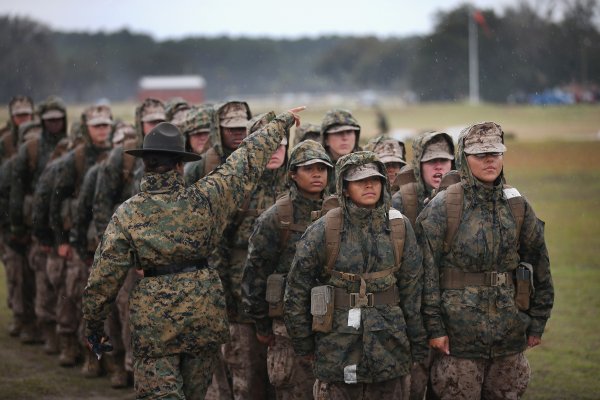