4 Mind Tricks You Can Use to Improve Your Focus

The game of tennis is a mental gauntlet, and performance psychologists have made a science out of converting anger into positive mental focus. In this True special report, part of a series, one of the game’s leading mental coaches reveals the four steps players (and anyone else) can take to avoid mental implosions on the court and achieve a state of peak performance.

We noticed it on video. We were taping players, watching their matches, literally thousands of hours of footage, and what we saw was that points were often won and lost not during the points themselves, but between the action.

There was this time on the court—roughly seventy percent of the match—where players would exhibit a range of emotions and, not surprisingly, they were not all positive. The players weren’t their best selves out there, and because tennis is such a mental sport, with so many sudden swings of momentum, we set about putting a protocol in place for players to control their emotional state between the points and get their emotional chemistry right to optimize peak performance. In the beginning, following the steps are like acting; do them often, they become habit.

Step 1: Greet Every Negative Action with a Positive Physical Response

The cells of the body are all connected. Negative thinking or anger create tightness throughout the body. We act out of anger and then the problems get deeper. We do things we regret, and regret triggers another emotional state. So we coached players to give a positive response to every mistake, error or missed opportunity. If you’ll notice, so many of the top players like Roger [Federer], Maria [Sharapova] or Novak [Djokovic], treat their mistakes a similar way: they turn their back against their mistakes immediately. And they turn their back quickly, as if to erase the error, leave it behind and free themselves to move on.

Now, the walk. We teach players how to walk. How you carry your gait is critical, and each step you take must carry a sense of purpose and confidence, all preparing you mentally to focus on what you need to do next and launch yourself into the point.

You cannot be your best self if you’re not relaxed. But getting into a relaxed state is not easy, especially after you get your serve broken. So, just like tennis is a game of margins, the mental game of tennis is also about limiting chances of thinking too much and making an emotional mistake.

Between points, one piece of advice we tell players is to stare into the strings of their racket or onto the court. Why? The eyes absorb so much information, and if you’re playing in front of tens of thousands of players, you look up in the stands, you might see something that catches your attention, and you forget to relax. You are no longer preparing for the point, you are taking in information. The strings of a racket or a part of the court is a neutral resting point for the eyes, and prepares the body for a more relaxed state.

Another part of relaxed response is the shoulders. The shoulders are directly related to the limbic system, up near the brain. They must be relaxed. Drop them.

Now that your body is relaxed and in a proper emotional state to focus, it’s time to prepare the point. It’s time to ask yourself, what is the score? What do I want to do? What is my plan to win?

Every player should have a ritual because rituals allow them to focus their mind and really launch into the point. The kind of ritual doesn’t matter, so long as it brings focus and allows the player the ability to maintain their momentum and treat each point with a similar energy.

You could bounce the ball a certain way or visualize where you want the serve to go. Or, on the return, swaying back and forth, jumping up and down, visualizing where you want the return to go. The key is consistency with the ritual, entering the ritual in the proper emotional state, and limiting the ability to think too much about the mistake you just made.

This article is part of The Tennis Mind, a special series from True.Ink, a new experience-based magazine that has featured tales on how to run with the bulls in Pamplona, how to build your lover a houseboat, and how to make Tom Brady’s exclusive Pancake Recipe. This article originally appeared on True Ink 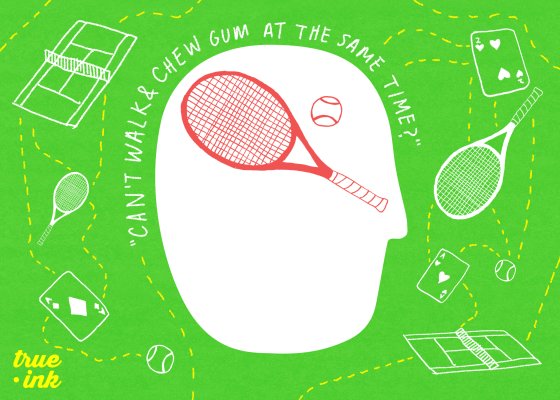 3 Tricks Pro Athletes Use to Improve Concentration
Next Up: Editor's Pick