Robots Will Take Our Jobs—But We Will Adapt

Machines have been taking jobs from people (and horses and carrier pigeons) for hundreds of years now. Robots and artificial intelligence technologies (AI) simply continue this trend.

In the past, when major technology shifts occurred, the new machines made many jobs obsolete—but they created even more new ones. In at least some cases that’s happening now too. As economist Tyler Cowen points out in his book Average is Over, an F-16 fighter aircraft requires the support of around 100 people, including the pilot, to fly a single mission. A Global Hawk surveillance drone requires 300.

But that’s just one example. The worry now is that today’s technologies are evolving much more rapidly than those of the past. The patterns of disruption happen faster now, within lifetimes. In addition, today’s machines aren’t just providing new sources of physical labor—they’re providing brainpower too. AI systems will increasingly perform functions that were once handled by lawyers, doctors, journalists, and virtually every other kind of knowledge worker, along with factory workers, truck drivers and taxi drivers, retail personnel, and more.

This shift will continue to create broad benefits to consumers, as AI systems simultaneously improve performance and drive down prices so that more people can access a broader range of services.

But how does one thrive as a worker in this new world? One key is to encourage the development of AI systems and robots that are designed to enhance professionals, rather than replacing them altogether. In a medical setting, for example, AI systems will increasingly handle diagnoses and treatment planning, but caregivers will still be necessary—and have more time for—more substantive personal interaction with patients.

There’s a flipside to this dynamic too, of course. As Cowen and others, including MIT professors Erik Brynjolfsson and Andrew McAfee, have suggested, we humans must develop skills that complement the functions that computers and AI systems perform well. That way, we can work with them instead of competing against them.

In part this can mean learning to code. But it also includes cultivating more general skills and attributes that today’s highly connected and always-evolving workplaces demand.

Collaboration, continuous education, an entrepreneurial mindset, and most of all, adaptability, have never been more valuable than they are now.

In the Industrial Age, operational perfection was the Holy Grail, as increasingly monolithic corporations sought to squeeze greater levels of efficiency out of relatively static manufacturing processes and distribution chains. In the Networked Age we now inhabit, where tighter and more comprehensive feedback loops accelerate change, adaptability and speed are the key strategic advantages.

As the pace of change accelerates, entrepreneurs must tap the tools of the Networked Age to accelerate entrepreneurship. We need new products, new companies, new industries – all of which will create new jobs for people.

By using tools over thousands of years to leverage our innate instincts for creativity, team-work, and reciprocity, we have exponentially raised our standard of living and continuously re-defined what it means to be human. The tools we have at our disposal now, including robots and AI systems, are more powerful than ever. But the innovation and adaptability that have always made us human are still there too. We have the opportunity to reinvent work again with robots —and forge a new set of jobs through entrepreneurship and ingenuity. 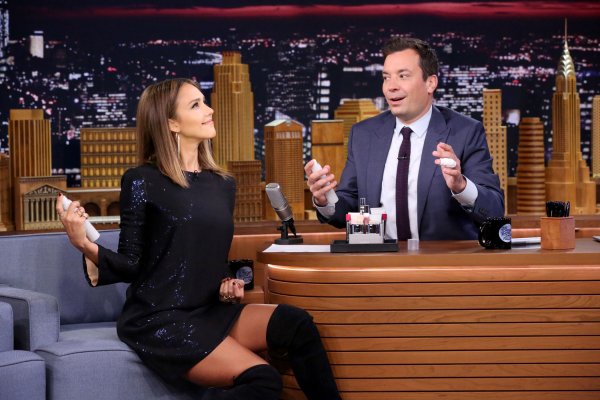 Jimmy Fallon Fails to Give Jessica Alba an Honest Grilling Over Her Company's Lawsuit
Next Up: Editor's Pick