Neil Patrick Harris is about to embark on yet another hosting gig — only this time, it’s not an awards show.

Instead, the former How I Met Your Mother star will be the face of a new variety series on NBC, Best Time Ever With Neil Patrick Harris, bowing Sept. 15. Broadcast live from a studio in Queens, N.Y., the hourlong multi-act show will feature a mix of stunts, comedy skits, performances, game shows, audience giveaways, hidden camera pranks and celebrities appearances.

“It’s part Fear Factor, part primetime game show, part hidden camera, part SNL Digital Short, part Tony Awards,” Harris tells The Hollywood Reporter of Best Time‘s hodgepodge nature. Though the ratio remains a mystery, Harris is banking on his ample awards hosting experience to ensure it runs smoothly. Adds the 42-year-old, who’s MC’ed four Tony Awards, two Emmys and last years’ Oscars: “I know how to work on the fly, and that will be a big part of our show.”

For Harris, Best Time marks the first project for which he’ll serve as a hands-on executive producer. “I’ve been a producer on these other [award] shows, but I was more ‘producer-in-training,'” he says. “With this, I’m involved in a lot of the decision-making across the board.” He’s relying heavily on the expertise of ITV Studio’s director of entertainment Siobhan Greene, who co-created and launched the show’s British inspiration, Ant & Dec’s Saturday Night Takeaway.

In a conversation with THR, Harris offers up some more details about the show’s format, discusses his plans to win over top comedians (i.e. Amy Sedaris) and reveals why the network has been shying away from describing Best Time as a straight-up “variety show.”

Best Time Ever was initially described as a variety show, but the network is no longer calling it that. How would you describe the show?

Everyone on team NBC seems to be concerned about the tag ‘variety show’ because I think they worry that it insinuates that we’re doing sketch comedy, that we have a troupe of actors doing improvisational scene work — and we’re nothing like that. It is variety in the true sense of a variety of different segments. So some are game show based, some are hidden camera based, some are following audience members. We have a 7-year-old version of me that’s going off to do his own bits. We have a guest announcer every week who is going to be a big celebrity who will be playing along. We’ll end the show with something called “The End of the Show Show,” which is a big performance piece that will be me learning how to do random stuff. There will be stunts. There is a segment called “Neil Versus,” which I have to compete against someone random. We’re trying to figure out how that works, where I have to try to beat someone in a laser maze. I’m not sure what.

So, are you comfortable with not referring to it as a variety show?

I’d say we’re variety redefined. I think the “variety show” with quotation marks around it is something that people remember from their childhood, but there hasn’t been a show where you cared less about what the show was about and more about having a good time watching the show. I think people who watch the show from home will enjoy themselves. People who watch the show from home live may actually be a part of the show. People who are in the audience will love it, too, because they’ll be a real participant within the show. We want to the audience, where ever they are, to feel like they’re actively involved in it, and since we’re live we’re able to do that. We’re not pre-taping it and then pretending like the audience is super caffeinated; we’re not getting people to make them jump up and down and scream. Like, this is live. So you’re watching it when they’re watching it, and if it’s not working, I’ll do my best to fix it. And if it is working, we’ll have a blast. That’s kind of my plan.

You mentioned there will be a celebrity guest segment on the show.

Yes, lots of celebrities. It is NBC. We’re following The Voice, let’s not forget this.

I’m assuming you’re very involved in finding those people. Are you reaching out to your friends?

F— yeah, I’m an executive producer on this show. I’ve been looking at logos. You cannot imagine the minutia of how shiny a logo should be to fit on a shirt! Look, I’m invested in everything. I want this to be a mainstream show. It’s a big NBC 8 o’clock — it premieres at 10 p.m. but moves to 8 p.m. — and it launches the night on Tuesday, which is a big night for them. But I don’t want that to therefore mean that we’re just kowtowing and catering to the biggest mass audience we can get. I still want the standup comedians at The Improv to think we’re funny. I still want Amy Sedaris to think our show is funny. I’m trying to maintain a sense of humor level and a commitment by the celebrities who are willing to play along to be of a certain world so that we’re still clever.

We have a lot who are booked and confirmed. I’m remiss in saying that I can’t reveal who they are yet, but I understand the logic behind NBC announcing them the week before on social media and have it be a thing.

Who are you drawing inspiration from for this show?

Well, it’s based on Ant & Dec’s Saturday Night Takeaway, a show in the U.K. It is that show, and they’re in their 12th [season] — they’ve done it since 2002. They just won a BAFTA Award for the second year in a row for this show, so they know how it works. And the executive producer from that show, Siobhan [Greene], she’s now a part of our show, so we have a lot of intel. We have 12 seasons of making sure that this works well. But if I had to compare it to a show that exists, I think I legitimately couldn’t because I think, as a producer, it’s six different shows. It’s part Fear Factor, part primetime game show, part hidden camera, part SNL Digital Short, part Tony Awards. It’s kind of six things simultaneously. I feel like that’s what an audience needs right now to watch it live because otherwise they have so many options — you kind of have to overwhelm them with interesting segments, otherwise they’ll change the channel.

What have been the biggest differences in readying Best Time Ever versus preparing to host an awards show? And how has the latter helped you on this show?

Well, I’m one of the executive producers on it, so that’s the difference. I’ve been a producer on these other shows, but I was more “producer-in-training.” I was working with people who had done 50 award shows before so that I could see how it worked. But with this, I’m involved in a lot of the decision-making across the board. And I can’t really speak to how it goes live because we haven’t start filming it yet, but I trust that the experience that I’ve gained by doing live awards shows as the host and being backstage and someone goes long on their speech — even though it says, ‘Please wrap up,’ they don’t — and then they’re suddenly a minute-and-a-half long. And a minute and a half in award show time is a long time, so I find myself backstage with my writers saying, “What do we cut? What do we change? Why don’t I go out instead of that person? Or why don’t they go out instead of me? Just have the voice of God do it!” [Laughs.] So I know how to work on the fly, and that will be a big part of our show. If the front half of it is going great and people are loving it, we’ll sit in it and then we’ll quickly realize that we’re running long and we’ll have to figure out how to wrap up the show because we cut to the news — or The Voice.

Andy Samberg is getting ready to host the Emmys in a month. As a hosting vet yourself, do you have any advice for him?

I don’t think Andy needs any advice. He’s a very smart guy and he’s developed his own sense of humor that people follow and I think that’s very important. So he’ll infuse the Emmys with his own sense of humor, which people already find funny. And he’s very well-versed in digital short comedy. He’s been a presenter on award shows a lot. He presented at the Oscars, so he’s been backstage and he knows what it’s like. That’s the trickiest part of that beast because when you haven’t done those things before, that’s all new experience and you don’t have time to process new experience when you’re hosting one of those shows. The only drawback to the Emmys is that there’s just so many awards — and they’re all across the board, so you have to somehow get the audience into the headspace of drama, like Game of Thrones, and then you have to quickly spin them into Orange Is the New Black. How you do that, that’s the question. So that’s on him, and I can’t wait to sit back and laugh my head off. 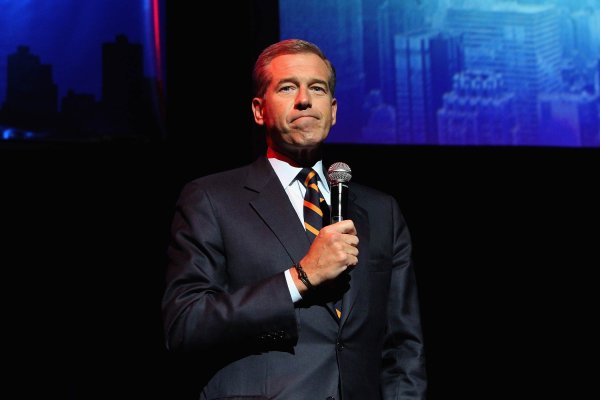 Here's When Brian Williams Is Coming to MSNBC
Next Up: Editor's Pick