These 6 States Take in the Most Syrian Refugees

The White House announced Thursday it would take in as many as 10,000 Syrian refugees next year in the wake of growing concern in Europe over the flood of migrants fleeing the Middle East.

In the U.S., a number of factors go into where refugees are moved, says Sarah Margon, Washington Director of Human Rights Watch. Refugees are relocated through negotiations between the federal government and non-governmental organizations called VOLAGs (voluntary agencies), which contract with the State Department. Those NGOs help determine which communities are right for relocation based on factors like housing availability. At the same time, refugees can also indicate if they have family in the U.S. and can try to be reunited with relatives, which can help direct where they’re relocated.

Refugee communities take root in certain cities for a number of reasons. Minneapolis, for example, is home to a large Somali population that began moving to the area in the early 1990s during the Somali civil war. A sizable Hmong population relocated in Wisconsin after fleeing Southeast Asia during the Vietnam War. One of the largest waves of refugees ever to make it to the U.S. were the Vietnamese “boat people,” who fled Vietnam in the late 1970s and largely settled in California.

The states that have taken in the most Syrian refugees are sizable and can handle a bigger influx of people looking to resettle. California has historically taken in large numbers of refugees, and Texas—despite the perception of being anti-immigrant—has actually led the U.S. in refugee resettlement over the last four years. Some areas already have communities with a long-established Middle Eastern presence. Dearborn, Mich., for example, has a large Arab-American population that stretches back to the late 19th century, and the state has continued taking in refugees from war-torn Arab countries over the last decade. Margon says that any new influx of Syrian refugees will likely look to states that already have significant Middle Eastern populations.

“Once a community gets established, you see refugee populations who want to reconnect with those communities,” Margon says.

The White House has been under pressure to open its doors to more refugees as Europe struggles to deal with hundreds of thousands of migrants looking to resettle. The increase in refugees relocating to the U.S., however, would still comprise just a small portion of the overall number of people fleeing Syria. The United Nations estimates that 11 million Syrians have been dislocated since the start of the country’s civil war in 2011, 4 million of whom have fled to neighboring countries. Germany alone is expecting 800,000 refugees seeking asylum by the end of the year. 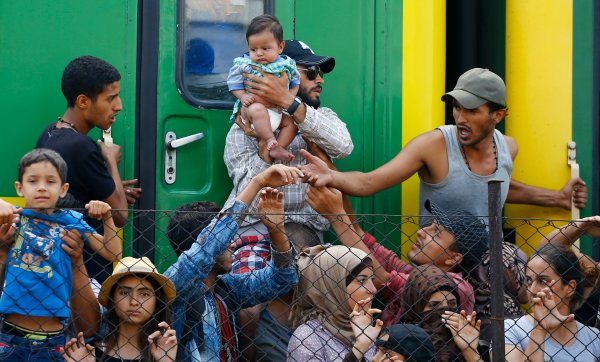 U.S. Wary of Opening Doors to More Syrian Refugees
Next Up: Editor's Pick