A few years ago, I attended the North Carolina Republican Party’s annual dinner in Greensboro–the first stop on one of my road trips. The keynote speaker was Donald Trump, which was of little interest to me. He was in his toxic birther phase; I assumed it was a ploy to gin up interest in his reality-TV show. Anyway, I was there to find out what North Carolina Republicans thought about things that actually mattered. So I didn’t attend the press availability after Trump’s speech, and that did not go unnoticed. Trump sent a minion out to the lobby, where I was engaged in a really interesting conversation with local tech entrepreneurs. “Mr. Trump noticed that you didn’t attend the press avail,” he said, “but he’s willing to give you a one-on-one.”

No thanks, I said. And that was how I hoped to handle Trump’s presidential campaign. It seems clear now that I’ve made a mistake. I still don’t take Trump seriously as a candidate–he is an incurious boor; it would be like electing an 8-year-old President–but he has had two significant impacts on the campaign and the country, one possibly positive and one dangerously negative.

He has blasted through the niceties of American politics. He is rude, crude and ugly–and a significant wedge of the public, mostly white men with a high school education, love it. He has pulled back the curtain on our corroded political system, which has been rendered inchoate–bland public performances accompanied by vicious television ads–after 40 years of cynical massage by consultants and pollsters. The dueling, dated dynastic candidacies, Clinton and Bush, unwittingly demonstrate how blah it has all become. When Clinton staffers leak to the press that she’s about to become “more human” and Bush repeatedly describes himself as “passionate,” the smell of gooses being cooked fills the air. When you need to say it, you ain’t doing it.

Trump has also blasted through the ideological sclerosis of the two parties, combining some elements of left-populism–higher taxes on the wealthy–with a very dangerous, barely concealed racial hate mongering. He comes at a very dicey moment for the American people–a moment of transformation from a white, Christian-dominated nation into a gloriously mongrel polyglot. I’ve long assumed that the diminution of white demographic power would be accompanied by an increase in anger and frustration. That is the scab Trump is picking. I’ve also assumed that this sort of nativist xenophobia was a losing proposition: a new urban generation–not color-blind but at ease with diversity of all sorts–would be a potent countervailing force.

I still believe that, but I’ve also been reminded that a lot of innocent lives are going to be Trumped along the way. A few weeks ago, the New York Times reported on a Trump rally at a football stadium in Alabama. A man named Jim Sherota, 53, who works for a landscaping company, was quoted: “Hopefully, [Trump’s] going to … say, ‘When I become elected president, what we’re going to do is we’re going to make the border a vacation spot, it’s going to cost you $25 for a permit, and then you get $50 for every confirmed kill.'”

The blithe barbarity of the sentiment was stunning. My first thought was of my daughter-in-law-to-be, a Latina immigrant who is here legally, who is terrific at what she does, who is admirable in every way. And then–lo and behold–a week later, my son told me that she’d awakened in the middle of the night, terrified, and said, “I’m scared of Trump.”

No doubt, Trump doesn’t want to establish a human-hunting preserve at the border, but his coarse talk is empowering his supporters to speak their minds; a delicate demographic transition is being made more combustible. He is playing with nitroglycerin, which is why Trump now has to be taken seriously and taken down.

People say to me, You must be having fun this year. The ultimate theater has found its ultimate charlatan. Who knows what’s going to happen next? Politics is interesting again, finally.

But that’s not how I feel. I watched Jeb Bush do a solid, substantive town meeting in New Hampshire on Sept. 3–and afterward, all the questions from the press were about Trump, who had questioned Bush’s willingness to speak Spanish in public. There are real issues to be discussed–including illegal immigration–but they are crushed by Trumpery. And other candidates–Ted Cruz, Scott Walker–debase themselves, and double down on the crudeness, by angling to snare Trump’s constituency should he falter.

So this really isn’t much fun. I’m with mi hija latina: Tengo miedo también. I’m scared of Trump too. 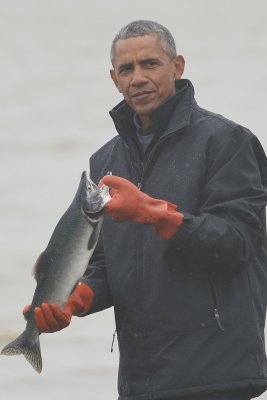 Watch Obama Snack on a Bear's Leftover Salmon in the Wild
Next Up: Editor's Pick