Brutality and charity were on display this late summer in Europe as countries responded to tens of thousands of refugees and migrants arriving from the Middle East, Africa and South Asia. The response of some nations summoned comparisons with the darkest events of World War II: Hungary enclosed asylum seekers in razor wire; Czech officials numbered their arms with indelible ink; Slovakia issued anti-Muslim decrees. But Germany and Austria transcended their past, offering access at railway stations and borders across Central Europe.

But if the moral imperative of the immediate crisis seems clear, a longer-term solution is harder to see. The U.N. Convention on asylum was created in 1951 as Europe struggled to aid millions who had fled Nazism and communism during WW II. But those arriving on the continent now are part of a postwar record, with almost 60 million people fleeing long-running conflicts around the world, pushing the system to its limits.

More than 4 million Syrians have fled the civil war that followed President Bashar Assad’s crushing of the 2011 Arab Spring there. Nearly half have sought shelter in Turkey. Lebanon took in 1.1 million, equal to almost a quarter of its own population, while the burdened governments in Jordan, Iraq and Egypt also took their share. The U.N.’s refugee agency, which supports the regional response, says it can no longer handle the load: its 2015 aid plan is just 41% funded. The World Food Programme has cut aid to 1.6 million Syrian refugees, leaving some with less than 50¢ a day for food.

As fighting escalated this year, more Syrians sought refuge in an already overburdened system. “This was just the summer when people in Syria decided there was no hope,” says a senior Obama Administration official. “It does feel as if Syrians have given up,” agrees Bill Frelick, director of Human Rights Watch’s refugee program. With limited aid and hosts in the region struggling to cope, the new refugees joined others fleeing west. News of safe havens in Western Europe sent instantly via social media boosted the flow, and to handle it, trafficking networks in Turkey and the Balkans shifted from moving drugs to moving people.

Despite shocking images of refugee suffering in Europe, such as the widely shared photograph of a drowned toddler on a Turkish beach, Syria’s immediate neighbors are still dealing with the bulk of the crisis. (The U.S. has taken in only about 1,500 Syrian refugees.) But the growing number of Syrians adds to tens of thousands of others fleeing poverty and unrest in Africa and South Asia, bringing the total number of migrants to Europe this year to 380,000. Some job-seeking Balkan nationals have also headed west, fueling a political backlash, while some Europeans voice fears the mostly Muslim asylum seekers pose a security threat.

There is no evidence they do; many refugees are deeply loyal to those who help them. Asylum seekers aren’t a bigger financial burden on the state than other migrants, though much depends on their levels of trauma and where they settle. Experts agree the best solution for refugees is voluntary repatriation when the dangers they have fled subside, but there’s little hope of that in Syria with Russia reportedly stepping up aid to Assad’s regime and ISIS remaining dug in after some losses.

So the flow is set to continue. On Sept. 9, the European Commission announced it would distribute a total of 160,000 asylum seekers across the continent, and E.U. officials will consider other measures on Sept. 14. The humanitarian crisis could be eased by granting blanket asylum to Syria’s displaced, Frelick says, as more than 90% have so far had valid claims to protection. No matter the outcome, Syria’s refugees, stripped of their homes, families and possessions, will continue to expose the values of the societies to which they flee. 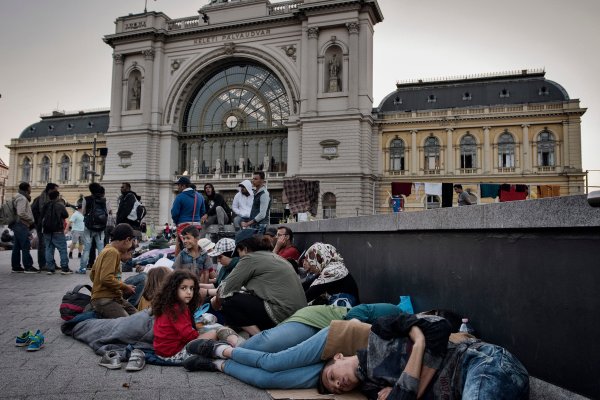 In Search of Refuge
Next Up: Editor's Pick