A foreign suspect in the Aug. 17 bombing of Erawan Shrine, identified by the ruling junta as Yusufu Mieraili, is seen during a re-enactment with police officers outside the Central World department store nearby the shrine in Bangkok on Sept. 9, 2015
Nicolas Asfouri—AFP/Getty Images
By Nash Jenkins

Recent developments in the strained investigation into last month’s fatal bombing at Bangkok’s Erawan Shrine have revealed that several suspects are Chinese or held Chinese documentation, adding weight to the theory that the attack was the work of Uighur Muslim separatists from China’s westernmost region of Xinjiang.

Thai officials said Wednesday that the main architect of the attack managed to escape Thailand using a Chinese passport on Aug. 16, the day before the blast killed 20 people and wounded more than 120.

Officials identified the fugitive, whom they are calling “Izan,” during this week’s questioning of Chinese-born Yusufu Mieraili, who has apparently confessed to handing the explosives to the yellow-shirted man seen on CCTV cameras depositing a black backpack at the popular tourist site. Mieraili was arrested during a raid at a residence in east Bangkok late last month during which an assortment of bombmaking equipment and fake travel documents were also seized.

Mieraili said that Izan was the ringleader of the bomb plot — the one who organized its execution and assigned roles to his accomplices before fleeing the country. He is now “one of the foremost wanted individuals” in the investigation, according to Thai deputy police chief Chakthip Chaijinda. Reuters reported on Thursday that he may have fled to Bangladesh.

Izan is the latest addition to the Thai police’s shortlist of elusive individuals potentially responsible for the bombing. Authorities regularly refer a “main suspect,” though the subject of the designation changes frequently. Nearly a month after the attack, the man who planted the bomb itself is still at large, and no larger group had publicly claimed responsibility for the devastation of one of Bangkok’s busiest commercial districts.

Mieraili, whom officials arrested at the Cambodian border on Sept. 1, appears to be the strongest lead. The 25-year-old is apparently from the Chinese territory of Xinjiang, home to China’s Uighur Muslim minority, which claims persecution at the hands of Beijing. A Chinese official told the press that Mieraili may have belonged to the East Turkestan Islamic Movement, a local militant group active in Xinjiang.

If Mieraili did indeed belong to the separatist group, and if the evasive Izan’s Chinese passport was authentic, authorities will likely pursue possible links to Uighur extremism in relation to the bombing. Some have ventured that the attack, which killed five Chinese tourists and two from Hong Kong, may have been a retaliatory gesture against Thailand for the forced repatriation of more than 100 Uighurs to Beijing in early July. 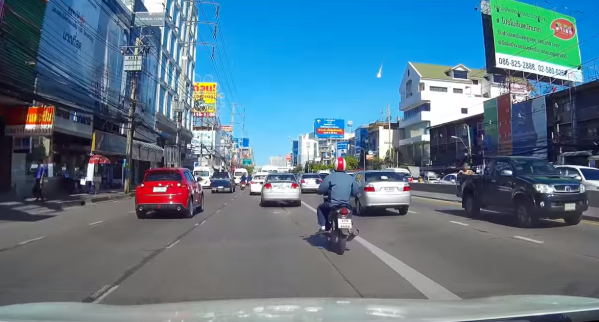 Fireball in Thailand Mistaken for a Plane Crash
Next Up: Editor's Pick