In a presidential field full of big personalities, John McAfee may be the most colorful candidate yet.

The anti-virus software tycoon announced Tuesday he would run for President under his newly created Cyber Party, making cyber security and government surveillance the key tenets of his campaign.

TIME spoke to McAfee about his plan for the campaign, why people should vote for him, and whether he thinks his strange tangle with authorities in Belize will hurt his chances. (He was suspected in the country for being a drug kingpin and wanted for questioning in connection with his neighbor’s death in 2012.)

The FAQ on your blog specifically says “I don’t like politics.” Why the change of heart?

It’s not a change of heart. I’m not a politician, nor am I entering as a politician. Politics is defined as the procedures and actions required to acquire power and maintain power within the government. And I think that’s what’s wrong with government today, is that people are more interested in keeping their seat in Congress than they are in serving the people.

I’m entering because I perceive my government as dysfunctional. It invades my privacy to ensure that I’m not the enemy they’re protecting me from. It’s largely illiterate in the world of cybersecurity. And yet the next war is not going to be fought with bombs and missiles, it’s going to be a cyber war. We’re not prepared.

What exactly is the Cyber Party? What does it stand for?

The cyber world is the world of computer technology which is pervasive in every item that we own. Everything is based on the cyber world, and we’re on a precipice, a very scary place. Last month hackers proved they could take control of a Jeep about halfway around the world over the Internet. Yet we blithely are putting these things into every device known. So our society is basically founded on cyber science, and our leadership is largely illiterate.

Also, privacy. We have given up every aspect of privacy that’s necessary to maintain our humanity. The NSA and all other covert agencies within the U.S. government have massive technological means of watching, listening, they know who you are, who you’re talking to, they can invade their bedroom at night when you’re in bed with your spouse. We have to get [our privacy] back or else we’ll cease to be human.

You went away from the Internet in Belize, into the jungle and away from society. So why do you now want to go to Washington?

I never left the Internet. Technology has been my main love of my life since I was a young man. As to my campaign, this is not going to be the typical campaign where I’m out on the trail kissing babies and shaking hands. I’m going to use the technology I’ve mastered to mount a different sort of campaign, one where I’m accessible to the people. If I wished, I could just sit in my bedroom, run for president, and win.

Do you really think you have a shot?

I’ve been in a tech leader since the late 1970s. When I was running McAfee I never charged any individual. I treated individuals like people. That started some sort of myth or something. For example, recently 50,000 hackers attended Def Con. I attended. I was swamped 24 hours a day by fans wanting photographs, autographs, saying “You’re my hero,” “You’re my idol.” I don’t know how that happened. But I do know that there are tens of millions of those people out there. And these are not the people reached in standard polls, because they’re not the kind of people who would answer a poll. But on election day I promise there will be a big surprise.

Are you worried about your past legal trouble hurting your chances?

I don’t really have past legal troubles. I’ve been arrested twice in my life. Once in 1973 for marijuana possession, and once for a DUI and for possessing weapons in Tennessee a few weeks ago. The DUI will absolutely be dismissed, it was based on a legal prescription I had just obtained that day for Xanax. I had never taken Xanax before. I was absolutely impaired, no question, but in the state of Tennessee it was a legal prescription and the blood test will prove there was no alcohol in my system.

I was never charged for any crime in Belize. I was wanted for questioning, which in a Third World country means they string you up by your heels put a football helmet on your head and bash your head until your brains turn to mush. I’m not interested in being questioned like that. I’ve offered to meet Belize multiple times in a neutral country, and they have refused.

So, in a nutshell, why should people vote for you?

I’m an interesting and charismatic character. But more importantly, I am 69 years old and I have done a lot, been in a lot of places, run billion dollar companies, lost fortunes and made fortunes, and I think somewhere in all this experience I’ve gained just a tiny spark of wisdom. Enough to know a dysfunctional government when I see one, and I think people will recognize that in me.

Correction: The original version of this story incorrectly described McAfee’s wealth. He is a millionaire. 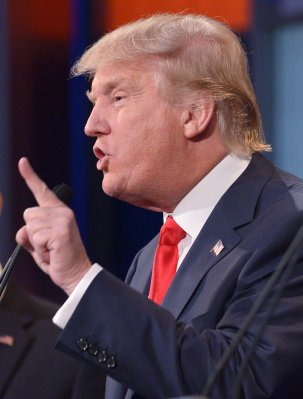 Trump Wants CNN to Donate Debate Proceeds to Veterans
Next Up: Editor's Pick