Iran Renews Attacks on the U.S. and Israel In Spite of Nuclear Deal

The Supreme Leader of the Islamic Republic of Iran, Ayatollah Sayyed Ali Khamenei renewed his attacks on Israel and the United States in a speech to members of the Iranian public on Wednesday as reported by his official website www.khamenei.ir and his twitter account.

Khamenei said that the negotiations over the Iran’s access to nuclear material with the U.S. and other nations did not mean there had been any rapprochment over other issues such as Israel.

“After negotiations, in Zionist regime they said they had no more concern about Iran for next 25 years; I’d say: You will not see the next 25 years, God willing there will be nothing as Zionist Regime by next 25 years,” Khamenei tweeted, refering to Israel.

Khamenei also said the U.S. remains the ‘Great Satan’. “Satan only deceives and tempts, but the Americans not only do that but they also murder and place sanctions and act hypocritically. They claim to be the banner holders of human rights in the world, yet every few days an innocent unarmed person in America itself is murdered by their police, and this is only one example of their crimes. They are worse than Satan,” he said.

Warning of the intentions of the United States, Khamenei said: “US officials seek negotiation with Iran as means of infiltration and imposition of their wills, the great Satan that the people threw out of the door is trying to get back in from the window and we will not allow this.”

Ayatollah Khamenei said that there will be no further talks with the US on other topics, “The Americans, with a division of labor, are dealing hypocritically with Iran, some smile while others are busy preparing more sanctions against Iran. We allowed negotiation with the U.S. only on the nuclear issue for certain reasons, in other areas we did not and will not allow negotiations with US,” he said.

The Iranian ruling groups appear to be divided between to those who want a closer relationship with the West and those who want to remain antagonistic to the West. Khamenei’s comments could be designed to calm tensions at home rather than inflame them abroad. 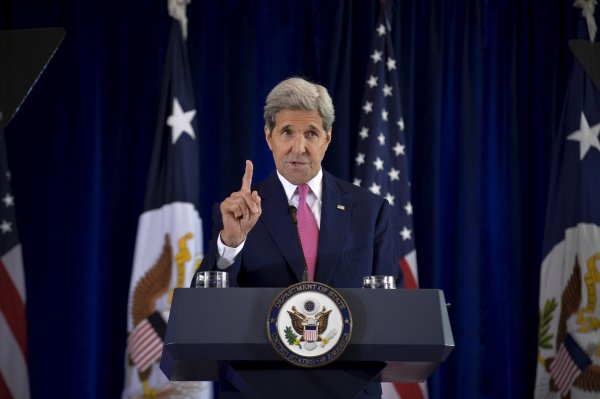 Why It's Good News That the Iran Deal Will Go Forward
Next Up: Editor's Pick