Ellen DeGeneres: Judging American Idol Was 'One of the Worst Decisions I've Made'

Ellen DeGeneres doesn’t miss her days as a judge on American Idol one bit.

She told Howard Stern Tuesday that being a judge on Season 10 was “one of the worst decisions I’ve made,” and that she couldn’t stand crushing so many people’s dreams.

“As a fan of the shows, it doesn’t matter that I sing or I know anything about pitch … I’m like everybody else at home, so I thought I’m gonna represent those people at home that have opinions,” she said, according to The Wrap. “But then I just thought, like Howard says, I can’t break this person’s heart. Let somebody else do that.”

DeGeneres also opened up about her interview with Caitlyn Jenner, which aired Tuesday, during which she asked Jenner about her evolving views on gay marriage. Jenner, who has said she is politically conservative, has opposed gay marriage in the past. “I said, ‘You’re wanting people to understand and accept you — this is like, really confusing to people. And you still have a judgement about gay people and marriage,'”DeGeneres told Stern. “She goes, ‘Well if the word marriage is that important.’ It is. That’s the word.”

Jenner said on the show that she had “really changed thinking here to: ‘I don’t ever want to stand in front of anybody’s happiness.'” 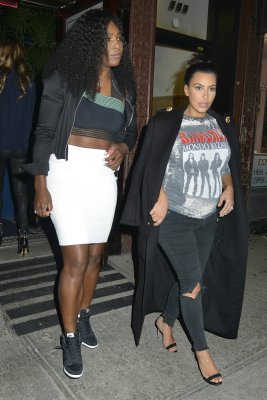 Serena Williams and Kim Kardashian Had Tea Together
Next Up: Editor's Pick