Bangladesh's Shahadat Hossain looks on during a training session before the second cricket test match against England at Old Trafford cricket ground in Manchester June 3, 2010.
Philip Brown—Reuters
By Rishi Iyengar

Authorities in Bangladesh are seeking prominent cricket player Shahadat Hossain and his wife on suspicion that they abused their 11-year-old domestic helper.

The young girl was found on the street Sunday night and subsequently hospitalized, the BBC reported.

Police have filed a case against Shahadat, who was ruled out of action for six months in May after twisting his knee during a match against Pakistan.

The 29-year-old fast bowler was missing all of Monday and has been unreachable on his phone, according to ESPN Cricinfo. He had reportedly filed a complaint on Sunday afternoon with police in the Mirpur locality of Bangladesh’s capital city Dhaka, claiming that his helper had gone missing.

The Bangladesh Cricket Board (BCB) expressed shame at the allegations against Shahadat, who has represented the national team in 38 test matches and 51 one-day internationals.

“We didn’t expect this from a senior cricketer like him,” the BCB’s Chief Executive Officer Nizam Uddin Chowdhury told Cricinfo. “We are embarrassed.” 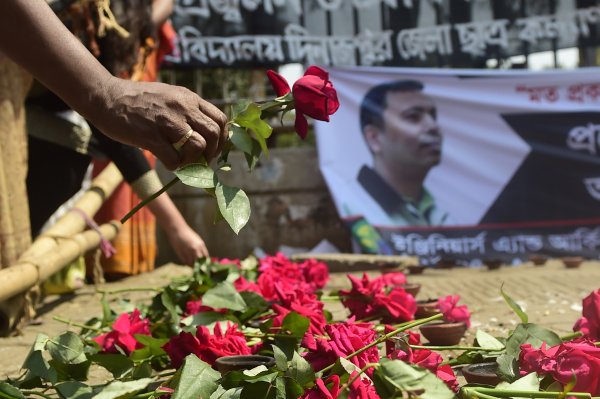 Three Arrested for Bangladeshi Bloggers' Killing
Next Up: Editor's Pick