Refugees Race to Austria and Germany Before European Borders Close

Migrants board a train taking them to the Austrian border from Keleti train station in central Budapest on Sept. 6, 2015
Christopher Furlong—Getty Images
By Rebecca Collard / Budapest

On the platform of Budapest’s main train station, refugees scramble trying to find trains that are headed to the border with Austria.

Syrians, Iraqis, Afghans and others from the Middle East and Africa attempt to read the signs and schedules in Hungarian. Each train to the border takes hundreds more refugees to Western Europe.

Austria and Germany have essentially opened their borders to refugees and in the past two days as many as 12,000 have entered Austria, most bound for Germany. While that relieved the mounting pressure on Hungary, which had thousands of refugees outside its main train station last week, many more are entering the country to try and make their way north.

“We have war in Syria. We have superterrorists in Syria,” says Yaman as he boards a train bound for the Austrian border. “We can’t live there, not until the war is finished.”

And the wars in Syria, Iraq and Afghanistan have no end in sight, fueling the biggest wave of refugees in Europe since World War II.

Just after midnight on Sept. 4 the Hungarian government sent dozens of city buses to transport refugees out of the country. Thousands piled on, almost clearing the square outside the train station and the concourse below where many were camped out. But by the morning hundreds more had arrived from the Serbian border.

Yaman and his eight friends crossed into Hungary on Sunday morning, being careful not to be caught by Hungarian security forces. Within hours they had arrived in Budapest and bought tickets, $12 each, onto Hegyeshalom, the last Hungarian village before the border. From there refugees walk the final 2 miles to Austria.

Around 2,000 other refugees also crossed into Hungary from Serbia today, according to Yaman, who didn’t want to use his last name, fearing for his family still in Syria. Most have ended up here in Budapest and each hour a train packed with refugees leaves for the border. The Hungarian police sit by and watch.

Families with small children scurry down the platform and struggle into the carriages. Most knew before they even left home that they wanted to make it to Germany.

“From the border, I’m going to Hungary and then on to Germany,” says Rayan, who also asked not to use his last name. He is from the Iraqi city of Mosul, which has been under the control of the Islamic State of Iraq and Greater Syria (ISIS) for more than one year. A local Hungarian woman helps him read the train schedule.

Hungary has promised to seal its southern border with Serbia by September 15 and has been constructing a 13-ft.-high fence on the frontier, but that has not stemmed the flow.

“It was one group after another across the border with Serbia,” said Rayan, who also crossed early Sunday.

“If anything I think the numbers have increased,” says Bastian Wilplinger, an Austrian volunteer who is helping to organize other Austrians to come to Hungary and drive refugees up to the border.

Today, he says, they took hundreds of people and hope to help more, but he doesn’t think the open-door policy of Austria and Germany will last long. On Monday, the BBC reported that Germany’s willingness to help “should not be overstretched,” and Austrian Chancellor Werner Faymann has already indicated the doors may shut soon.

“We have always said this is an emergency situation in which we must act quickly and humanely. We have helped more than 12,000 people in an acute situation,” Faymann told media. “Now we have to move step by step away from emergency measures towards normality in conformity with the law and dignity.”

Wilplinger points out that few refugees stay in Austria, most want to go on to Germany.

If that happens, it’s likely to create a new bottleneck in Hungary. The right-wing government of Prime Minister Viktor Orban — who has been calling on Austria to close its borders — has been clear that the refugees, especially Muslims, are not welcome here. He even wants to make it crime for refugees to cross the border illegally, punishable by up to three years in prison. If Hungary does manage to seal its 100-mile long border with Serbia, a seemingly impossible task, refugees will be stuck there, in a country with high unemployment and few resources to help refugees.

At the same time, an estimated 10,000 refugees are stuck on one Greek island alone and thousands more arrive on the shores of southern Europe each day, most with their sights set on Western Europe. The 10,000 refugees that are expected to enter Germany this weekend are only the crest of a massive wave of migration. 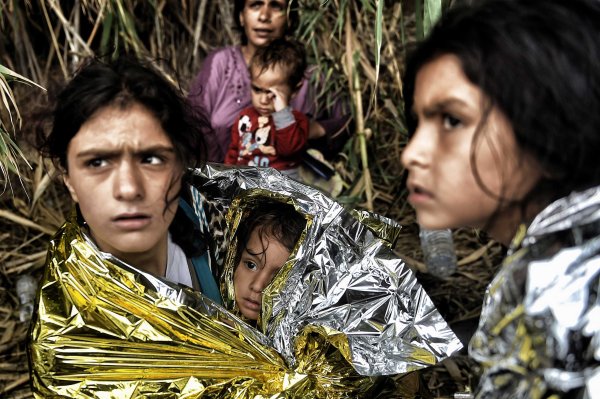 These Photos Show the Massive Scale of Europe's Migrant Crisis
Next Up: Editor's Pick