These Are Pope Francis’s Top 5 Messages for Americans

Pope Francis attends his weekly audience in Saint Peter's square at the Vatican on Sept. 2, 2015.
AP
Ideas
By Christopher J. Hale
Hale is a Democratic politician from Tennessee; he has been a Catholic nonprofit executive and helped lead faith outreach for President Barack Obama.

Before Pope Francis travels to the United States in just over two weeks, ABC News made sure Americans got a preview of the visit a first-ever virtual town hall where people across the U.S. could ask the pope questions about faith, life, and their struggles.

If you missed it, here’s the top five messages Francis had for the American people:

One of the most poignant moments of the town hall occurred when Francis spoke with 17-year-old Valerie Herrera, who said she was often bullied because of a skin disease that left white blotches on her face and body.

The young woman mentioned singing had helped her through difficult times in her life, and then asked what the pope hoped for from young people. But before Francis answered the question, he had one request for Valerie.

“May I ask for you to sing a song for me?” Francis asked in English. Valerie paused. But Francis encouraged her: “be courageous!” Finally after encouragement from her classmates and her mother, Valerie sang a Spanish hymn to the Virgin Mary.

Francis said Valerie’s willingness to be brave was his message to young people in the United States:

“You have the strength to overcome. Don’t be scared. Don’t stop. There’s nothing worse than a young person who has retired before his or her time.”

2. Single mothers should never be ashamed

Pope Francis made news earlier this week with his decision to strengthen the Catholic Church’s message of mercy regarding the act of abortion. This message also extends to single mothers, who Pope Francis believes have too often been cast out by the Church and society.

Here’s his response to a young woman on her difficulties being a single mother:

“I know it’s not easy to be a single mother. I know that people can sometimes look askance at you, but I’ll tell you one thing, you’re a brave woman because you’re capable of bringing these two daughters into the world. You could have killed them inside your womb, and you respected life. You respected the life you were carrying inside you, and God is going to reward you for that, and he does reward for you for that. Don’t be ashamed. Hold your head high. ‘I didn’t kill my daughters. I brought them into the world.’ I congratulate you.”

3. He loves the nuns

Pope Francis would likely agree that while he might be the Pope, women run the Catholic Church.

Women share and pass on the faith. Mothers teach their children how to pray. Nuns run schools, feed the hungry, and protect the poor.

Pope Francis appreciates their work, and he wanted to let American nuns—who had recently been under investigation by the Vatican—know that he loves them:

“I want to thank you…And through you to thank all the sisters of religious orders in the U.S. for the work that you have done and that you do in the United States,” the Pope told one nun. “Is it unseemly for the Pope to say this? I love you all very much.”

4. The pope wants us to care for immigrants—now matter how they got here

ABC News allowed Pope Francis to choose what U.S. communities he wanted to address, and the homeless and immigrants were among the groups he chose.

During the course of the town hall, he highlighted the work of an American nun who minsters to immigrants and listened to the stories and struggles of a 19-year-old immigrant, Ricardo Ortiz, who had to provide for his family as a child and lost a soccer scholarship after the school discovered he wasn’t an American citizen.

Francis said he admired Ricardo’s courage and then gave him a soccer analogy to describe our shared responsibility: “the match is played between friendship in society and enmity in society.”

“We are all created for friendship in society. All of us bear responsibility for everyone else. And each one has to make a choice in his or her heart. And we have to help that choice to be made in the heart,” said Francis.

5. He wants to be close to us and he needs our prayers

A young man from Los Angeles who had experienced both homelessness and joblessness asked Pope Francis why his trip to the United States was important. Francis responded that he wanted to be close to the American people so he could better journey with us:

“There’s something very important for me, which is closeness. For me it’s difficult not to be close to people. When I approach people, as I’m going to do with you, it’s easier for me to understand them and help them along life’s path. That’s why this trip is so important, for me to draw close to your path and your history.”

And he also had one request from us: “I pray for you all, for all of the people of the United States, and I ask you please to pray for me.”

Correction: The original version of this article incompletely quoted Pope Francis’ response to a young woman about the difficulties of being a single mother. 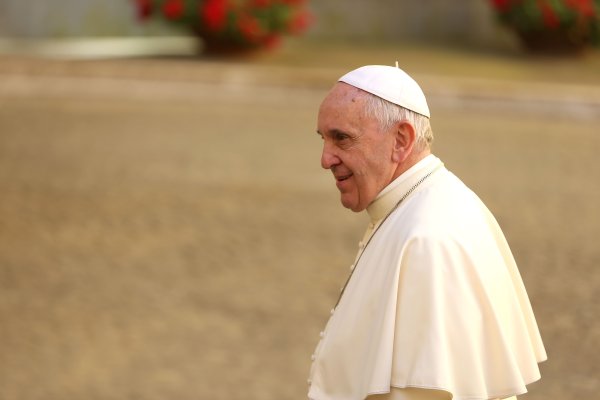