It’s been 25 years since Rowan Atkinson first introduced the world to Mr. Bean, and he marked the show’s milestone anniversary on Friday with a celebration at Buckingham Palace.

Atkinson rode up to the London landmark in character, atop his famous 1976 British Leyland Mini 1000. The arrival recreated a memorable scene from the show, in which Mr. Bean packs his vehicle so full of shopping purchases that he needs to find an alternative way to drive it.

The car had a #MrBean25 hashtag commemorating the show, which ran from 1990 to 1995 (and inspired a spin-off animated series and two feature films). There was also a cake for the occasion, and presents, and Mr. Bean’s best friend Teddy also came along for the ride.

You can see another photo from the event below.

Mr. Bean celebrates 25 years with a trip to Buckingham Palace in London on Sept. 4, 2015.
Jonathan Hordle/BEImages 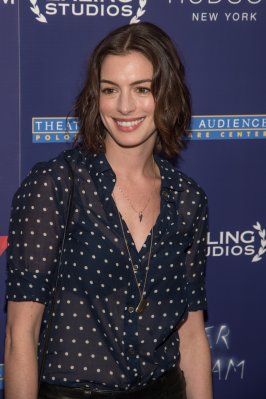 Anne Hathaway Is Losing Roles to Younger Actresses
Next Up: Editor's Pick