Protesters show a placard during a Bersih (Clean) rally calling for the resignation of Prime Minister Najib Razak on Aug. 30, 2015, in Kuala Lumpur. Najib has become embroiled in a scandal involving state-fund debts and allegations of deposits totaling $700 million paid to his bank account
Mohd Samsul Mohd Said—Getty Images
By Nash Jenkins

For weeks, Malaysian Prime Minister Najib Razak has sat at the center of the largest corruption scandal in the country’s history, besieged by allegations that he personally pocketed around $700 million from a state development fund called 1Malaysia Development Berhad (1MDB). Now, Najib’s government is being accused of obstructing an independent investigation into the scandal.

“There is — apparently — some meddling going on,” Tunku Abdul Aziz Ibrahim, who chairs the advisory board to the anticorruption commission investigating the 1MDB case, said in an interview with the BBC. “I think that … there has been interference, and I think it is unfortunate. It was ill-advised on the part of the government to have made all these changes while the investigation was ongoing.”

The “changes” in question refer to the government’s decision in late July to promote four members of the investigation committee to deputy positions in Najib’s Cabinet, which prohibited them from remaining on the committee. The investigation is currently at a standstill until the committee appoints new members next month, the Wall Street Journal reported.

Tunku Aziz declined to go so far as to describe the 1MDB matter as an instance of corruption. Nevertheless, such frank remarks on the case from a prominent public official reflect the pervasive wariness of the government that has erupted across the Southeast Asian country in recent weeks. Last weekend, tens if not hundreds of thousands of Malaysians took to the streets of Kuala Lumpur and other cities to demand Najib’s resignation in what experts agreed was the largest public demonstration ever witnessed in Malaysia.

The case has echoed far beyond the region. On Wednesday, authorities in Switzerland froze accounts in the country belonging to 1MDB that collectively held tens of millions of dollars. The Swiss attorney general is now investigating those linked to the accounts for corruption and money laundering, the BBC reports. 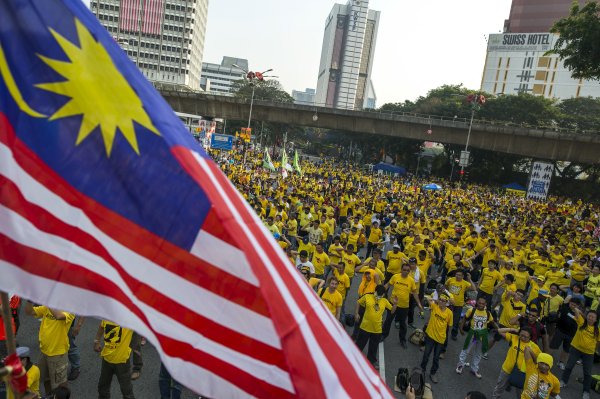 Antigovernment Protests in Malaysia Continue
Next Up: Editor's Pick