Natasha Lyonne and Judy Greer on Hollywood, Female Directors and Their New Movie

Judy Greer and Natasha Lyonne have carved out two well-defined spaces for themselves in the world of working actors. Greer is the neurotic nurturer (a mom, a wife, a best friend) familiar from 27 Dresses and 13 Going on 30, as well as recent roles in Jurassic World and Ant-Man. Lyonne is the spiky rebel who catalyzes drama on Orange is the New Black. But in their new film, the friends are trading places.

Addicted to Fresno, out on-demand now and in theaters Oct. 2, sees Greer and Lyonne playing a pair of sisters, one flailingly self-destructive and one dutiful. The unexpected chemistry resulting from both playing against type fuels the film’s early going, before the pair suddenly needs to dispose of a dead body. It’s a brutally dark comedy, one that pushes Greer and Lyonne significantly further than a mainstream film might.

And little wonder: The film’s director, Jamie Babbit, has worked with Greer on her TV show Married and directed Lyonne in 1999 breakout But I’m a Cheerleader, and obtains from both actresses complexity and nuance. “Two things can be true,” Greer tells TIME. “I think the best way to get an awesome cast is to offer actors roles against type… No one ever asks me to do that.”

TIME: Are you more comfortable doing interviews together than separately?

JG: We also never get to hang out anymore, so it’s selfishly fun, because I can hang out with her.

NL: —or they just become very exasperated with each other. And whenever I’m around Judy, I get really riled up, like she has information for me. I want to see how she does interviews. Working with Judy was like that. It felt like watching a master class of how it’s done at the supreme level.

JG: She’s being really nice, but she’s one of the best actresses of our generation, so I would say the same thing.

NL: Jamie Babbit—having done But I’m a Cheerleader, I felt really safe with her and knew she was hiring me on purpose. It felt like they really wanted me there, so I felt really safe to study the information around me, and Judy is the ideal person to check in with. When I would see Judy and Fred [Armisen] do their thing together, because Fred is the best improviser on the planet, I would just start laughing. The two of them know how to lock in; they were like professional athletes. They would not break.

JG: Fred would not break.

NL: But you could keep up. Really, you could, Judy. I was just dissolved into giggles. It’s fascinating to watch people in the prime of their lives, doing their best work. It’s a low-stakes situation, an indie movie among friends, so there’s a certain level of comfort there that’s different from a studio movie where everyone behind the monitor is your worst enemy.

NL: That was the big joy of this movie for me. The script was tight, we knew what it was—

JG: —I didn’t care how I looked, I didn’t need to be pretty—there’s so much freedom in that, for an actress, when you don’t have to look pretty. It’s so nice.

NL: The feeling that they really want you there in the main part, and how you look is a totally ancillary thing, like it would be for a man, because there’s women behind the monitor who don’t see you that way and see you as an equal human being and not a commodity. They want your essence to translate. That’s what they’re after. Jamie is as sick and alpha as any man I’ve ever met, but what she wants is that essence of you on the screen. To feel that safe and feel you can be yourself—we all have our stuff, and it can be frustrating when you can’t harness it on demand. We were in a safe enough environment that we could.

Did the fact of your comfort on set make you feel more comfortable with the film’s edgier material? Much of the film seems to constantly risk going too far into manic darkness.

JG: I try not to think about tone, ever, when I’m acting, and just be in the moment, as my version of that character. I never thought, “Gotta be careful, this is tricky!” That’s my director’s job. There’s an energy on set, and when you show up, you just know what you’re doing. I never worried about threading that needle. That was Jamie’s job.

NL: What makes it, for me, really fun to work with Judy is that we’re similar in the sense that there’s an underlying darkness or awareness that being a person is problematic to both of us. In very different ways, we articulate that with a constant immediacy that neither of us can shake. As people and as actors, we bring that with us probably against our will. You could probably play it very comedically, but if we were the Stepford Wives, we’d have to fight against that. It’s hard to not have that underlying human thing of “Life is a peculiar concept, isn’t it!” And from that place, you can go a lot further into jokes that have an underlying darkness, that feel rounded, because you never lose that feeling of something else going on.

You two both play against your respective types onscreen. Was that appealing to you?

NL: How does everybody know I’m such a pervert when they ask about this movie? “You’re a nice, decent person, Judy, and you’re a pervert!” And we’re just like, “Yeah, we know!”

JG: I think it’s because Jamie knew us both. That’s what’s cool about working with the same people over and over again. I see so many different sides of Natasha, now that I’ve worked with her. If I were going to cast her in something, I could see 50 different roles she could play. Before, I would have thought, “Oh, Natasha’s just a badass!” But she’s just a little pussycat.

NL: Judy brings her upbeat good-naturedness into really f—ing uncomfortable times of the day. It was a great way for me to lean into [my character] and figure out how to be incredibly miserable but not abusive about it. My way is, “I’m unhappy, you’re unhappy!”

JG: I think the best way to get an awesome cast is to offer actors roles against type. I don’t know one actor that doesn’t want to play something that they never get an opportunity to play. We all think we can do everything—that’s why we’re so terrible to be around. If you want to get awesome actors in your movie, look at Anne Hathaway in Rachel Getting Married, or us playing our characters. No one ever asks me to do that.

Do female directors have more sensitivity to complex characters?

JG: I do think there’s some of that; I’ve experienced a lot of objectification from men—not necessarily to me, but I’ve seen it around me. You have to be careful saying, “Women are this way,” and, “Men are that way.” It’s not true to say that just because someone’s a woman, they’re not going to objectify a woman, or push you harder.

NL: I’ve definitely seen Jamie behave in ways that would immediately be considered intense. In fact, she’s a much more decisive hand than many men I’ve worked with, who tend to waffle. There’s an injustice because men, especially white, straight men, tend to get opportunities that make things easier than for women or anybody else. At the independent movie level, you have a lot of straight, white men you work with on their first indie feature who have no idea what they’re doing. That can manifest in a lot of problematic ways, including trying to pretend they know what they’re doing, or just being spineless creatures, as opposed to a Jamie Babbit, who has nothing but spine.

JG: She does not suffer fools gladly.

NL: If you had transcripts of the two of them, with no [gender] attached, you’d say, “For sure, Jamie is the man, who’s objectifying the woman, and sort of a very intense personality, and for sure this waffling, shriveling creature’”—

JG: I can’t tell you how many times I’ve heard the direction, “Let’s just go again, and just do whatever you want!” It’s like, “Why don’t you f—ing direct me? What do you want?”

I want to say that Bridesmaids was trailblazing—I know it wasn’t directed by a woman, but it was written by a woman and starring women, and that movie just exceeded expectations at the box office, and it became, “Women are really hot right now!” I could say the same thing about Orange is the New Black. And that’s a great trend, but let’s get it to the point where it’s— 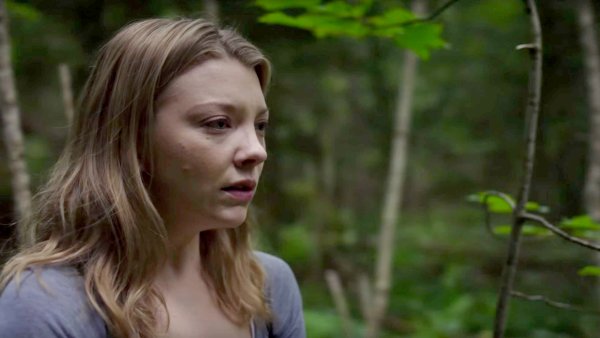 Natalie Dormer Can't Find Her Twin Sister In the Trailer for The Forest
Next Up: Editor's Pick