How Bush Went from 'Winner' to 'Loser' in Trump's Eyes

There are two types of people in Donald Trump’s world: winners and losers.

Of late, the real estate mogul has dumped former Florida Gov. Jeb Bush into the latter camp, pummeling him on the campaign trail for everything from his energy levels to his bilingualism.

But it wasn’t always that way. Since Bush first ran for office in the 1990s, he has flitted in and out of Trump’s good graces. Here’s a look back at the roots of their rivalry:

Winner: In late 1997, Trump hosted a fundraiser for Bush at his sprawling apartment in Manhattan’s Trump Tower. The $500-a-head soiree raked in six figures for Bush’s 1998 gubernatorial campaign. “I remember [Bush] saying, ‘It was the most successful fundraiser I’ve ever had,'” Trump told the Washington Post. Six months later, he also forked over $50,000 to the Florida Republican Party.

Loser: Trump was seeking influence in exchange for his largesse. “As a businessman and a very substantial donor to very important people,” he explained recently to the Wall Street Journal, “when you give, they do whatever the hell you want them to do.” Trump had significant business interests in Florida. He had been amassing real estate holdings in the Sunshine State, and he was working with the Seminole Tribe to build a series of new casinos. The donations became a source of controversy in the 1998 campaign. “It seemed awfully odd,” recalls Robin Rorapaugh, a Democratic consultant in Florida who served as campaign manager for Bush’s Democratic opponent in that race. But Trump’s money wasn’t enough to get Bush to budge on his opposition to new casinos.

Winner: Whatever frustrations Trump may have suffered from his failed bid to make Florida a gambling mecca, they caused no lasting damage in his assessment of the state’s new governor. In his book The America We Deserve, published in 2000, Trump showered Bush with praise, singling out his support for education reform and highlighting his leadership skills:

Winner: When Bush ran for re-election in 2002, Trump cut him a check for $500, the maximum donation allowed for state candidates in Florida.

Loser: Even before he jumped into the race for the GOP nomination in June, Trump had trained his sights on arguably his top rival. Declaring the nation had “Bush fatigue,” the Donald pounded Jeb during a May 22 speech in the Sunshine State. “He can’t even answer a simple question,” Trump said, mocking Bush for making “a total fool out of himself” when the brother of the 43rd President flubbed a series of questions about the invasion of Iraq. The attacks have surprised some observers who know both men. From conversations with Trump, “I thought he had a generally positive attitude toward Jeb,” says Brian Ballard, a Florida Republican who lobbies for Trump and raises money for Bush.

Winner: At the first Republican debate on Aug. 6, Trump gushed about Bush when the former Florida governor denied reports he had insulted Trump to a donor. “Jeb, I am very happy that you denied that, and I appreciate that very much,” Trump said. “He is a true gentleman. He really is.”

Loser: The good vibes have long since dissipated. Trump has hurled insults at Bush virtually every day since the debates, attacking him as a “low-energy person” who has “no clue” about issues ranging from immigration to Common Core and “should really set the example by speaking English while in the United States.”

Next: Unclear. Trump pledged to support the eventual Republican nominee Thursday, so if Bush ends up earning the nomination, he could become a “winner” again. 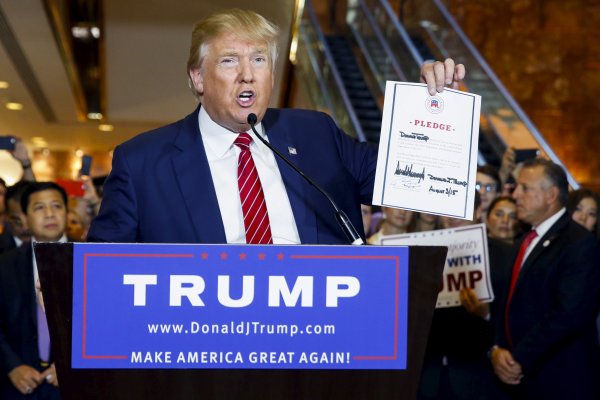 Trump Rules Out Third-Party Run
Next Up: Editor's Pick