Last year, CVS Health announced that it was banning tobacco products from all of its stores. The decision was considered a bold statement since tobacco garnered the drug store some $2 billion in sales each year.

On Thursday, CVS made another announcement aimed at proving that the tobacco prohibition was more than just corporate strategy. It released a study that suggests that the company’s tobacco ban may actually be improving public health.

A report by CVS Research Institute examined purchases of cigarette packs at drug, food, big box, dollar, convenience, and gas station retailers in the eight months after the company stopped selling tobacco products. CVS said the results show that there has been “an additional 1% reduction in cigarette pack sales across all retailers in states where CVS had a 15% or greater share of the retail pharmacy market, compared to states with no CVS/pharmacy stores.”

Here are a few other results:

CVS Health’s Chief Medical Officer Troyen A. Brennan said in the release that those stats may be a result of cigarettes being harder to find: “We know that more than two-thirds of smokers want to quit—and that half of smokers try to quit each year. We also know that cigarette purchases are often spontaneous. And so we reasoned that removing a convenient location to buy cigarettes could decrease overall tobacco use.”

CVS’s findings have at least one critic. Jeff Stier, a senior fellow at the National Center for Public Policy Research, told USA Today that CVS sold only a small percentage of the nation’s cigarettes to start with. “[T]he bold claim that its decision to stop selling cigarettes actually got a significant number of smokers to just buy the mostly ineffective nicotine patches and quit smoking, only illustrates how little the company knows about the difficulty of quitting,” he said.

CVS’s decision to stop selling tobacco was part of a larger effort to be a bigger player in the healthcare industry. Since its announcement of the ban in February 2014, CVS changed its name from CVS Caremark to CVS Health and bought Omnicare for $10.4 billion to get a bigger foothold in senior citizens’ care.

But the ban hasn’t been without financial consequences on the company’s bottom line. Last month, the company blamed a drop in 8% drop in quarterly same store sales on the ban. It said it’s planning to recoup those sales by improving its food and beauty sections. And in June CVS bought Target’s nearly 1,700 pharmacies for $1.9 billion. It’s also opening more of its MinuteClinic walk-in health clinics. 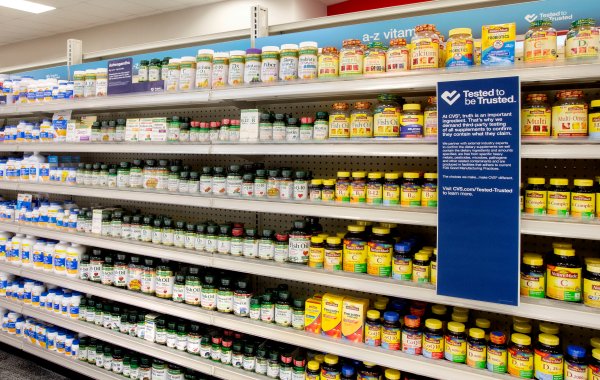 CVS Will Only Sell Supplements That Have Been Third-Party Tested for Safety
Next Up: Editor's Pick