Cindy Crawford Opens Up About Her Unretouched Photo

Cindy Crawford is opening up about the unretouched photo of her that went viral last year.

In a new interview with Elle Canada, Crawford, 49, addresses the photo scandal—which to her surprise turned into something positive—and also gives offers some life advice from her new book, that is being released this fall.

“I know my body, and I know it’s not perfect, but maybe I have a false body image; maybe I think I look better than I do,” she says in the October issue, which features her own the cover in a sexy black dress with thigh high slits. “I think that most women are hard on themselves. We think we look worse than we do. ”

“So I assumed I fell into that category, even though that picture didn’t reflect what I saw when I looked in the mirror—even in the worst dressing-room lighting,” she adds.

Although the image is one the supermodel says she would have preferred not be publicized, she realizes that the photo helped women feel better about themselves, noting the celebration it got online.

“Sometimes, the images that women see in magazine make them feel inferior—even though the intention is never to make anyone feel less,” Crawford says. “So somehow seeing a picture of me was like seeing a chink in the armor. Whether it was real or not isn’t relevant.”

The cover girl also says that she never spoke out about the picture because she “felt really manipulated and conflicted.” For her, speaking out against the image would mean rejecting the people who felt good about it. On the other hand, embracing it felt inauthentic because the photo was not real.

Crawford said the photographer to her, “‘Cindy, I’m going to send you the real one and it’s nothing like that. It’s clear that someone manipulated that image to make whatever was there worse.’ It was stolen and it was malicious,” she continues. “But there was so much positive reaction.”

Despite the social media frenzy that surrounded the viral image, Crawford took a page from her new book, Becoming, and found a teachable moment in the incident.

“I’m a big girl and I can handle it, but I used it as a teaching lesson for my own daughter,” she adds.

The mother of two later took to Instagram to share her own behind-the-scenes footage of her cover shoot. In one photo she dons a black maxi dress with a thigh high slit and cutouts across the chest area.

A video Crawford shared shows the photographer snapping photos of her in another outfit. This time, a little black dress that hits just above the knees, patterned with cutouts and accessorized with elbow-length gloves. 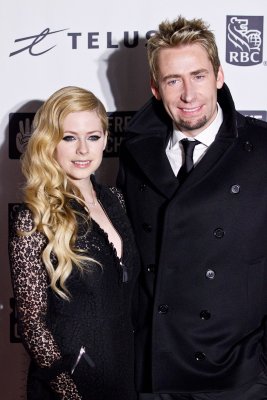 Avril Lavigne and Chad Kroeger Are Separating
Next Up: Editor's Pick