On Wednesday, Queen Elizabeth II will become the longest-serving monarch in British history. A royal spokesperson told Maclean’s that the record-breaking moment at which she surpasses Queen Victoria’s 23,226 days, 16 hours and 23 minutes is set to happen around 5:30 p.m. local time.

That “around” is puzzling, given the precision of royal records. The reason for the approximation is that there is no gap between the periods of rule of British monarchs. The second one dies, the next is in charge. So, while Queen Elizabeth II’s coronation didn’t come until mid-1953, she became queen the very moment her father, King George VI, died, on Feb. 6, 1952.

The challenge for anniversary-minded royal-watchers is that King George died in his sleep. It was widely reported in 1952 that he was found dead by a servant around 7:30 in the morning—meaning that he died, and Elizabeth’s reign began, at some unremarked-upon moment prior to that time.

In fact, it wasn’t until later that day that the new queen—who was on a trip to Africa—even found out about her father’s death and her subsequent change in status.

“It was not until early in the afternoon that Philip got the news (by telephone from a local newspaper) that changed their lives,” TIME reported. “He sent an equerry to call London for confirmation, then gently led his wife down to the river’s edge and told her that her father was dead. The Queen returned to the lodge on her husband’s arm, shaken but in full command of herself.”

As she came to terms with her new role and began to make her way home, the article continued, the signifiers of her rule snapped into place:

Read more from 1952, here in the TIME Vault: Elizabeth II 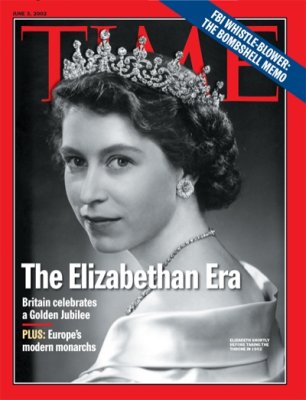