Migrants protesting as the Keleti train station in Budapest was temporarily closed, on Sept. 1, 2015.
Yuri Kozyrev—Noor for TIME
By Simon Shuster / Budapest

The odds did not look good for the Hungarian policemen. There were about a dozen of them, all brawny young men in white polo shirts and pointed red caps, who had been ordered to keep the migrants out of the Keleti train station in central Budapest. By Wednesday morning, it seemed these orders would be impossible to carry out much longer. There were just too many of the migrants camped around the station, and they were too determined to leave Hungary behind on their way to Western Europe.

“Maybe not today, maybe not tomorrow, but we will go to Germany on this train,” said Opada al-Mussa, a 22-year-old refugee from the Syrian city of Deir ez-Zour, which has been besieged for months by militants of the Islamic State in Iraq and Greater Syria. Along with thousands of other migrants fleeing conflict zones across the Muslim world, al-Mussa has been camped out at Keleti station over the past two days, turning it into one of the most volatile bottlenecks for the flood of migrants now rushing into the European Union through Hungary.

Hungarian authorities appear to have no coherent strategy for dealing with this influx of asylum seekers, more than 140,000 of whom have arrived in Hungary this year alone, triple the number registered in all of 2014. On Monday evening, nearly a thousand of them demonstrated at Keleti station, demanding to be allowed onto the trains bound for Germany, where they intend to apply for asylum. In an apparent reversal of government policy, the local transport officials relented that night, allowing hundreds of refugees to board the trains bound for Munich through Austria. But hours later, the authorities changed their their minds again and shut the station to the growing crowds of migrants gathered outside.

Since last week, asylum seekers have been streaming by the thousands every day into the European Union through Hungary, hoping to reach the more prosperous nations of Western Europe and apply for refugee status there. The loose line of riot troops guarding Keleti station is now the main obstacle standing in their way. In the cavernous passageways beneath the platforms, thousands of refugees have set up a sprawling encampment, mostly sleeping rough on the concrete floor or on thin mats, pressed up against each other for warmth and using their backpacks for pillows.

As the camp began to stir around sunrise on Wednesday morning, the local commuters poured into the station from the subway line below, and their faces betrayed a mix of sympathy, fear and disgust as they confronted the bedraggled foreigners huddled on the cold ground. “It’s shocking to see a lot of strangers in our home,” said Zsolt Fekete, a 23-year-old receptionist who was on his way to work at a Budapest hotel. “A lot of our families are afraid of these people,” he said. “They are very different from us, and you can see they are angry.”

On the other side of the square, hundreds of young migrants were just then resuming their demonstration in front of the line of riot police. One of the leaders who emerged from the throng was Loay Algandaly, a slight man in a grey sweater, who climbed up onto the shoulders of one of his friends and began leading the others in English and Arabic chants. “Let us go to Germany!” they shouted in unison at Algandaly’s command. “We want to leave!”

At first glance the scene seemed reminiscent of the street protests that kicked off Syria’s civil war in 2011, except the same defiant crowds are no longer protesting the Syrian regime. They have now incongruously been transported to the center of a charming European capital. Algandaly, who was only 16 years old when the Syrian uprising broke out in his hometown of Homs four years ago, appeared to put its early methods of nonviolent protest to use. “Open the gates! Open the gates!” he shouted along with the other refugees, jumping and waving their arms in the air.

As they watched from the bus stops around the station, many of the locals hoped their government would yield before the situation turns violent. “They are growing more and more angry,” said Attila Farkas, a 26-year-old doctor who was waiting for his bus to work on Wednesday. “If it continues this way, for one day, two days, I think there will be big trouble,” he added.

Behind him, more and more migrants were emerging from their encampment beneath the station to join the crowd of demonstrators, many of them waiting on the sidelines to see if the police would finally stand down. Others lined up at one of the few public toilets available to the migrants at the station, carrying toothbrushes and rolls of toilet paper. Food and bottled water seemed to be in scarce supply, as the Hungarian authorities have made neither of these available to the migrants occupying Keleti.

“I am not proud to Hungarian today,” said Zsuaza, a 28-year-old physician in Budapest, who declined to give her surname. “I just imagine what it would be like if my country was bombed and I had to run away and sleep on the ground in a foreign place.” The only solution, she said, was for the government to let the migrants get on the trains bound for Germany.

But the Hungarian authorities have so far refused to do that. Under E.U. law, they are obligated to register all migrants who enter Hungary and to keep them inside the country while their applications for asylum are processed. Zoltan Kovacs, the chief spokesman for the government, says Budapest intends to meet these obligations even if it means sealing off its southern border with Serbia, where most of the migrants are entering the European Union. “It’s completely untenable if you let these people come through the borders without any kind of control,” says Kovacs. But by the looks of Keleti station, the government’s control over the migrant crisis is already slipping away. 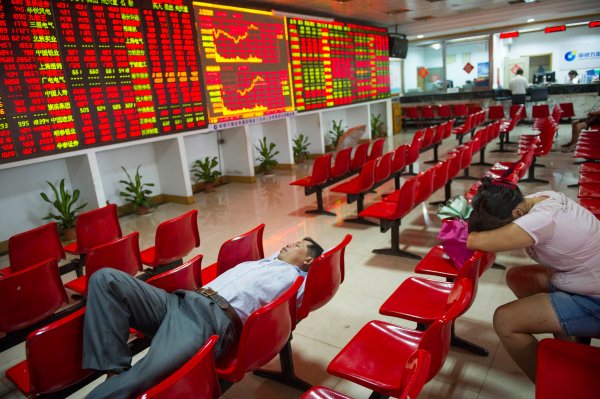 China Bourses Not In Step With Parade
Next Up: Editor's Pick