Bush Gets Personal With 'Germophobe' Attack on Trump

Former Florida Gov. Jeb Bush is escalating his all-out campaign against GOP front-runner Donald Trump with a new ad campaign and quiz on social media designed to highlight Bush’s conservative credentials in contrast with the businessman’s past embrace of the Democratic Party.

Branded “Which candidate are you?” the quiz notes that Trump once said he thought Hillary Clinton would negotiate a strong deal with Iran, backed an assault weapons ban and expressed support for single-payer healthcare, while highlighting Bush’s opposition on all those fronts.

In a strikingly personal attack, the quiz asks voters whether they would prefer a candidate who “is a germophobe when it comes to shaking hands,” a reference to Trump’s documented phobia, Bush, meanwhile is cast as a candidate who “strives to shake every hand everywhere.”

After collecting users’ email addresses and zip codes, the quiz presents its results. “You have clear Democratic tendencies,” it spits out if too many Trump items are selected. “You’re looking for the candidate who proposed record new tax hikes, supported single-payer health care, and supported an assault weapons ban. You’ve found your man in Donald Trump.”

Meanwhile, those who select pro-Bush options are presented with, “Jeb Bush is a conservative reformer for President who will actually get results. Like you, he supports cutting taxes, reducing spending, and limiting the role of the federal government in your life.”

The quiz follows a biting video from the Bush campaign Tuesday noting Trump’s past support for Democratic principles. Trump fired back with an Instagram video showing Bush presenting Clinton with an award for her career in public service, and calling for an end to Bushes and Clintons in the White House.

The escalation comes as the Bush campaign has determined they believe there is a strategic benefit in attacking Trump, potentially helping their candidate shore up support on his vulnerable right flank. The campaign had previously hoped to ignore Trump’s rise throughout the summer.

The Bush campaign is promoting the quiz on Facebook, targeting people “who have expressed an interest in or like pages related to Donald Trump” in Iowa, New Hampshire, South Carolina and Nevada, the campaign said. 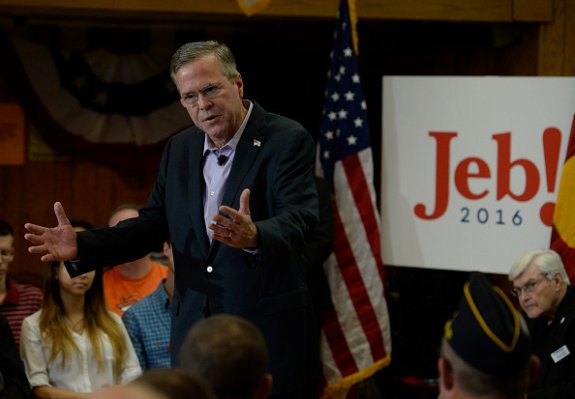