Nepalese police stop Hindu activists as they try to break through to a cordoned-off area near parliament during a protest demanding Nepal be declared a Hindu state in Kathmandu on Sept. 1, 2015
Prakash Mathema—AFP/Getty Images
By Helen Regan

Nepalese police killed five protesters in the south of the country Tuesday as demonstrators, angry at the government’s plan to change the constitution, clashed with authorities.

Police said four people were shot dead in the town of Birjung (40 miles south of the capital Kathmandu), when protesters threw stones and petrol bombs at a police post. A fifth person was killed in a separate clash in a neighboring town of Kalaiya, reports Reuters.

A new constitution has been under review since the monarchy was abolished during a Maoist insurgency in 2008. The proposed changes would federalize the Himalayan nation, dividing it into seven states.

Supporters hope the charter will bring political stability and boost economic development in the country, which is still recovering from two devastating earthquakes earlier this year.

But the Tharu and Medhesi minorities who live in the country’s southern plains, say the proposed demarcations would marginalize their communities. In a series of protests in recent weeks, several ethnic groups have demanded statehood in the new charter.

At least 20 people have been killed in violence since the draft constitution was announced two weeks ago.

Meanwhile, hundreds of Hindu protesters clashed with police in front of the assembly building in Kathmandu Tuesday. They are demanding that Nepal be declared a Hindu state in the new constitution, reports the Associated Press. 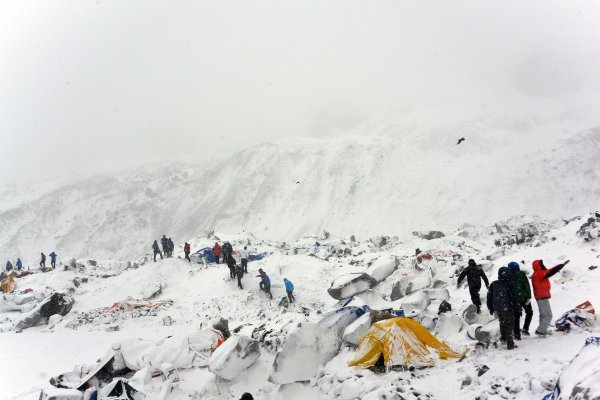 Nepal Reopens Mt. Everest to Climbers
Next Up: Editor's Pick