It was early 1974 when Leonard Matlovich stumbled across a story in Air Force Times that would change his life—and alter the course of gay rights in America. The piece mentioned that Frank Kameny, a pioneering gay rights activist, was looking for a case to test the military’s ban on gay service members. Matlovich had long known he was gay, but had lived his life firmly in the closet as he followed his father’s footsteps into the Air Force and served in Vietnam, earning a Bronze Star and a Purple Heart. After returning to the states, Matlovich, who was raised in the segregated South, worked as a counselor easing racial tension in the service.

It was exactly the sort of resume that Kameny was looking for. By Sept. 8, 1975, Matlovich, who had long been intensely guarded about his personal life, was on the cover of TIME under the banner headline, “I Am a Homosexual.”

Matlovich had become one of the most visible faces of the still-nascent gay-rights movement. TIME readers responded to the cover with letters that ranged from calling him “a disgrace to the uniform of an honorable service” to noting the irony of a world where you can “be highly decorated for killing thousands of your fellow men and be drummed out of the corps if you dare to love one.”

Today, 40 years after the cover first appeared, it serves as a striking reminder of how much has changed in a few short decades (although a bill that would push the upgrading of discharges of those who were in Matlovich’s shoes to “honorable” status is currently stuck in Congress).

“I’m pretty old and have been involved in gay rights for quite a while,” says Michael Bedwell, a close friend of Matlovich’s and the executor of his estate, “I never imagined simultaneously how far we had to go and how long it would take.”

Matlovich took his first steps toward becoming a public figure that June, shortly after he came out in a letter to his commanding officer. As TIME reported in the September cover story: “When T/Sgt. Leonard Matlovich handed his coming-out letter to his superior officer, a black captain at Langley Air Force Base, Va., the officer said: ‘What the hell does this mean?’ Replied Matlovich: ‘It means Brown v. the Board of Education.'”

That letter, which is now held along with the rest of Matlovich’s papers at the GLBT Historical Society in San Francisco, can be read here (roll over to zoom): 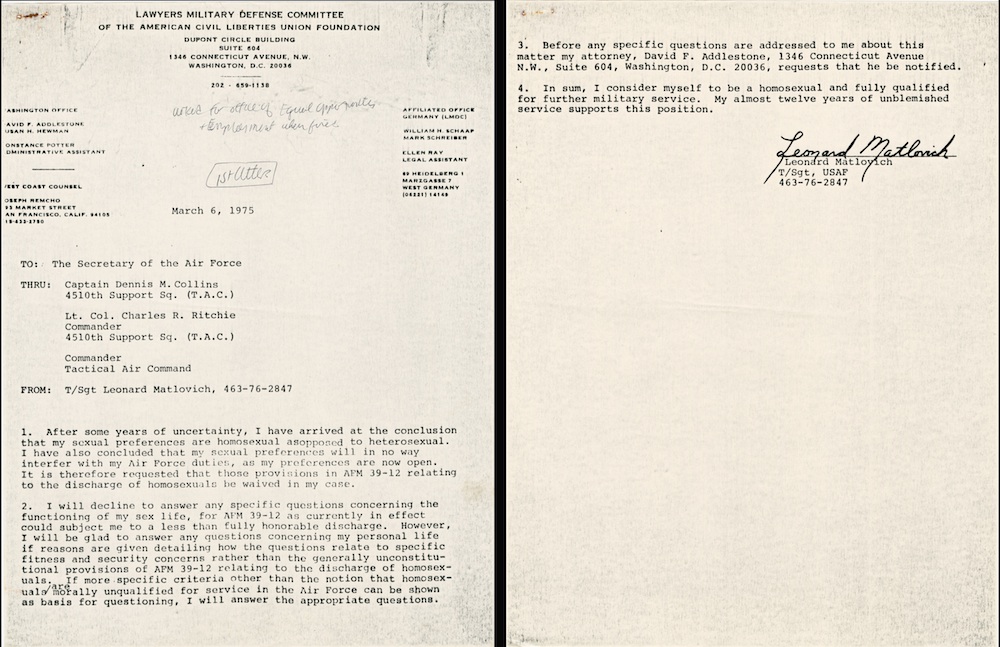 Unlike Brown v. Board, Matlovich’s case did not go to the Supreme Court. After the Air Force began the proceedings to give him a general (not honorable) discharge, Matlovich announced that he wanted the decision to be reviewed. Although the review board had the option to overturn decisions in “most unusual circumstances,” they refused to do so.

Matlovich went on to become a dedicated advocate for gay rights, running for the San Francisco public office that had once been Harvey Milk’s. In 1980, a judge ordered the Air Force to reinstate Matlovich and to give him five years’ worth of back pay on the grounds that the “most unusual circumstances” rule was too vague. The two sides eventually settled, but the story didn’t end there.

“He had a gift, peculiar to someone who really only had a high-school education and knew nothing about the gay rights movement before he became one of its leaders, of appreciating historical perspective,” Bedwell says.

Matlovich died of AIDS in 1988. He was 44. His tombstone, which does not bear his name, echoes the sentiments of that TIME reader from 40 years ago: WHEN I WAS IN THE MILITARY THEY GAVE ME A MEDAL FOR KILLING TWO MEN AND A DISCHARGE FOR LOVING ONE.

Matlovich’s influence was particularly strong on one case. Margaret Witt, a retired major in the Air Force Reserves, was a flight nurse who was discharged from the service after being outed against her will during the “don’t ask, don’t tell” era. After suing, Witt settled shortly after that law was repealed in 2010.

“I never thought I’d be in that position, but I think we all thought it could happen to us,” Witt says. “We all kept our own hidden libraries if you will, even of books, and grabbed for any articles we could find on what was happening. We silently followed very closely anything that was happening. The visibility of all of those folks was a huge influence whether they were aware of it or not.”

These days, as the military begins to accept not only gay people but also transgender service members, Bedwell often recalls something Matlovich told the reporters who swarmed his discharge hearing back in 1975: “Maybe not in my lifetime, but we are going to win in the end.”

Read the full 1975 cover story, here in the TIME Vault: The Sergeant v. The Air Force

Correction: The original version of this post misstated which court tried Margaret Witt’s case. It was the Ninth Circuit Court of Appeals.

Read More From TIME
You May Also Like
Read Next
Why Transgender People Are Being Murdered at a Historic Rate
Next Up: Editor's Pick