Marissa Mayer's Maternity Leave: CEO Moms, They're Not Just Like Us

Peter Kramer—NBC/Getty Images
Ideas
By Belinda Luscombe
Luscombe is an editor-at-large at TIME and the author of Marriageology: The Art and Science of Staying Together.

Marissa Mayer, CEO of Yahoo, is pregnant with twins. While many important and prominent male leaders have twins (President George W. Bush for one) and nobody seems to think it’s big deal, this is different, partly because Mayer is a twin-carrying CEO, which is kind of rare, and partly because, for better or worse, mom CEOs are judged differently from dad CEOs.

Last time Mayer and her husband Zachary Bogue had a kid, speculation ran riot over whether she was taking too little time off or whether she would be able to spend enough time with her kid or whether Yahoo could be well-led by a new mom. Having twins, which, as any parent of multiples can tell you, is not like looking after two babies so much as carrying two buckets of eels with no bucket, so this news is likely to kick that kind of speculation into overdrive. How can she have enough bandwidth for all she needs to get done?

Parents only have time for the good stuff. Sign up for TIME’s weekly parenting news roundup here.

But here’s the thing: Mayer is a CEO. Her essential job description is: get people to do stuff. And as CEO, she has oodles of practice at management and oodles of money and oodles of options. I recently interviewed YouTube CEO Susan Wojcicki, who’s a mother of five kids, aged from just months to 15 years. It’s her contention that being a CEO mom is way easier than being non-CEO mom. “The challenges for me were more when I got started,” says Wojcicki. “My nanny was my first employee; that’s a difficult person to manage. It’s more emotional than it is in the office.”

Wojcicki points out that not only do you have fewer resources and less cash when you’re starting out, you don’t have any management skills. “Now I have really good management skills partially which I have developed from being at work,” she says. “For work I have to delegate. At home I got better at finding people who could help me, so I can focus on the things that are important: the kids when they need me and the kids and their homework.”

Mayer has said she will treat this pregnancy and childbirth like the last one, meaning she won’t take much time off (last time she took two weeks). For her most recent child, Wojcicki has taken 14 of the 18 weeks of paid maternity leave that Google offers. (Yahoo offers 16 weeks.) These women don’t necessarily need to take so much time off, because they have the wherewithal to have their kids’ needs taken care of when they go back to work. But those moms who are still on the lower rungs of the ladder have fewer choices. And some have little or no paid maternity leave, so taking a lot of time off isn’t even an option.

“That’s when I think women are more likely to drop out of the workforce,” says Wojcicki, who has written publicly of the need for more paid parental leave. “When you’re earlier in your career, you have fewer resources and you’re paid less and you also don’t have any management skills. That was the time for me that was really hard.”

While companies such as Google have offered such options to their female workforce as egg freezing, or company subsidized shipping of breast milk from work trips, these are clearly amenities that enable moms to make their lives more like old-school dads’ were: unencumbered by child-rearing. They’re also much more about outsourcing the mechanics of having children and less about the soft skills, like helping kids process their day. A different approach would be to consider the skills and restrictions of parenthood as more of an asset and to encourage employees to use them for the benefit of the company.

Wojcicki, for example, says her desire to be home for dinner with her kids made it difficult for her in the beginning because she was more reluctant to go to evening events or travel as much. It’s one of the reasons, she believes why as the CEO of a site with a billion users, she has an unfamiliar name to most people. But that desire to cap her workday also helped her to prioritize and time-block ruthlessly. “I have to optimize that time I’m in the office and I have to focus on the highest priority things, the things that are really going to make a difference,” she says. “In some ways that’s helped me because it has aligned me with Google trying to do something very quickly.”

To be fair, some of the attention on CEO moms is warranted, because they’re the ones breaking new ground. Dad CEOs manage having kids the same way they’ve done it for decades: by leaving it their wives to organize it. No major upheaval going on there. But for a couple of generations there, most wealthy educated moms stayed home and raised kids. Now that they are becoming the bosses, it’s taking a while for the gears to shift. More companies are starting to offer parental leave, for either gender, rather than just maternity leave, but only a teensy tiny proportion of wealthy educated dads opt to raise kids full time. It’s natural that we are more curious about how women are managing this transition.

But let’s make sure we aren’t forgetting the vast majority of women, for whom motherhood comes before the keys to the C-suite. Perhaps by the time Mayer and Bogue’s daughters are hitting the career track they can feel free to repopulate the planet at any point they choose. 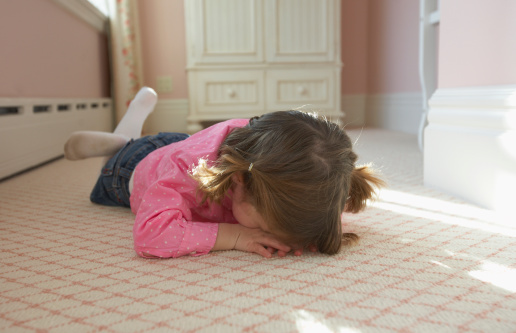 Tips for Managing Meltdowns From a Child Therapist
Next Up: Editor's Pick