Students pose with a Chinese national flag and red stars during an event to mark the 70th anniversary of Japan's World War II surrender at a primary school in Handan, Hebei province, China, on Aug. 31, 2015
China Daily/Reuters
By Hannah Beech / Shanghai

The South Pacific island chain of Vanuatu served as a staging ground for American troops fighting in World War II. But the remote islands escaped intense combat with the Japanese. Mexico, Venezuela, Cuba, Tajikistan, Kyrgyzstan and Kazakhstan weren’t exactly in the thick of battle against imperial Japan either. But that hasn’t stopped these nations, among others, from planning to take part in a massive military parade in Beijing on Sept. 3, marking the 70th anniversary of Japan’s official surrender in World War II. Around 1,000 representatives from 17 nations will march in the Beijing parade.

So important is this occasion to China that Sept. 3 has been designated a new holiday, a festive occasion with the catchy name of the Commemoration of the 70th Anniversary of the Victory of Chinese People’s War of Resistance Against Japanese Aggression and the World Anti-Fascist War. China’s Victory Day parade gives the country, under the leadership of President Xi Jinping, the opportunity to flaunt both new military hardware as well as long-standing foreign friends. Most of the 500 pieces of military equipment on display, from antiship ballistic missiles to attack helicopters, will have been unveiled for the first time, according to state media, and around 30 foreign leaders will take in the pageantry, including Russian President Vladimir Putin, Sudan’s Omar Hassan al-Bashir and Kazakhstan’s Nursultan Nazarbayev.

Leaders from democratic nations will be in shorter supply, although South Korean President Park Geun-hye will be in town when the parade takes place, as will former leaders like the U.K.’s Tony Blair and Tomiichi Murayama, the Japanese ex-PM who gave his nation’s most high-profile apology for its brutality during World War II.

On Thursday, more than 10,000 troops will goose-step past Tiananmen Square. To ensure that nothing will compete with some 200 military aircraft overhead, including a new bomber, flights from Beijing Airport will be grounded. The Beijing News reports that five monkeys have been trained to destroy nearby bird nests, lest young migratory birds collide with a speeding fighter jet. An average macaque, readers of the Beijing News were informed, can obliterate around 12 bird nests a day. (Falcons and dogs have also been recruited for the bird-clearing efforts.)

Vanuatu’s Prime Minister Sato Kilman will also attend the presumably avian-free festivities, in which seven members of the country’s police force will march. (Vanuatu has no army.) Now a nation of 266,000 people, Vanuatu has long enjoyed close ties with Beijing. Two years after its independence in 1980 — the archipelago was formerly the British-French colony of the New Hebrides — Vanuatu secured diplomatic relations with China. At the time, many countries sided with Taiwan, the island to which the Chinese Nationalist government escaped after losing to the Communists in 1949.

For a brief moment in 2004, Vanuatu switched allegiance to Taiwan, swayed by Taipei’s dollar diplomacy. (Six South Pacific nations currently recognize Taiwan.) But China quickly prevailed, with monetary dispensations of its own, and the Prime Minister who engineered the diplomatic switch lost his job. Another flirtation with Taiwan in 2011 was again forestalled by China. “For Vanuatu, participating in the parade is almost certainly about reinforcing and building relations with China in exchange for favors later,” says Jenny Hayward-Jones, director of the Melanesia program at the Lowy Institute for International Policy in Sydney.

After Australia, China is Vanuatu’s second largest aid donor. The Lowy Institute’s Philippa Brant calculates that, from 2006 to 2013, the Melanesian nation received around $220 million in aid from China. Beijing’s largesse is responsible for new roads, buildings and public transportation in Vanuatu. Although the tiny country already has a convention center, China is building Vanuatu another one — sparking debate over whether or not Chinese funds are being used for the most suitable projects. In many developing countries, Chinese-financed ventures also mean an influx of Chinese workers, narrowing the trickle-down benefits for the local economies. Reporting last December on road construction in Vanuatu by a Chinese state-owned company, a journalist for the Vanuatu Daily Post wondered whether the upgraded road was “an early Christmas present or something else in disguise.”

Back in Beijing, the seven-man team from the Vanuatu Mobile Force flag brigade has spent the days leading up to the parade at a training base on the outskirts of the capital, according to Asa Liu, an employee of the Vanuatu embassy in Beijing. The military facility, where other foreign marching delegations are also staying, is plush, at least as appraised by a spokesman for the Chinese People’s Liberation Army. There are, he announced, free accommodations, wireless Internet, laundry facilities — and a buffet of both Western and Chinese delicacies. 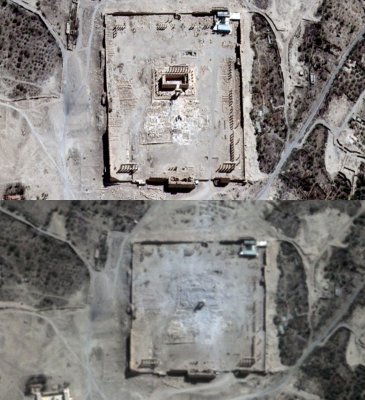 Satellite Images Confirm Destruction of Ancient Temple in Palmyra
Next Up: Editor's Pick