Top: A satellite image of the Temple of Bel seen in Syria's ancient city of Palmyra on Aug. 27, 2015; Bottom: A satellite image showing rubble at the temple's location on Aug. 31, 2015.
UNITAR-UNOSAT/AFP/Getty Images
By Mathew Katz

The United Nations used satellite images on Monday to confirm the destruction of an ancient temple in Syria’s Palmyra.

Witnesses had previously said that the 2,000-year-old Bel Temple was severely damaged in a massive explosion on Sunday. The Islamic State of Iraq and Greater Syria (ISIS) has released numerous propaganda images showing militants blowing up ancient ruins in the historic city, which is under the group’s control.

“We can confirm destruction of the main building of the Temple of Bel as well as a row of columns in its immediate vicinity,” the UN said, according to AFP.

The agency also released a photo showing the temple’s destruction. 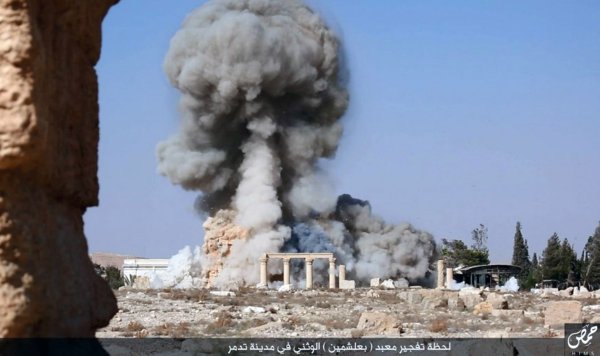 See ISIS's Destruction of Palmyra
Next Up: Editor's Pick