A Syrian family prepares to turn themselves into a Hungarian detention facility for migrants arriving in the European Union in Roszke, Hungary on Aug. 29, 2015.
Yuri Kozyrev—NOOR for TIME
By Simon Shuster

The smuggler’s asking price was high—about $800—but that didn’t seem to bother Tarek al Saleh, a 23-year-old refugee from Syria. Nor was he much concerned about the risk of getting robbed and left for dead, as many other Syrian migrants have been this year while making their way to Europe. The gamble was worth it, he said, as long as the human trafficker showed him the way into Hungary, his gateway into the European Union—and steered him clear of any Hungarian police.

“He knows where police stand,” al Saleh said of his Serbian smuggler. “He knows where to go.” They had agreed to meet at sundown on Saturday in the Serbian village of Horgos, just a couple of miles south of the E.U. border, and walk north through the corn and sunflower fields. His final destination, he said, was the Netherlands, where he hoped to meet up with a family friend. But he’d be racing against the clock to get there through Eastern Europe.

On Saturday night, when al Saleh reached the northern edge of Serbia, soldiers in neighboring Hungary finished erecting a razor-wire fence along the Serbian border, which had previously been open and unguarded for anyone trying to walk into the E.U. Later this week, the Hungarian parliament is set to reinforce that fence with legal penalties. The right-wing government of Prime Minister Viktor Orban wants to make it a criminal offense to cross the border illegally, punishable by up to three years in prison.

“We are going to communicate to them: ‘Don’t come to Hungary,’” says Zoltan Kovacs, the government’s chief spokesman. “’Illegal border crossing is a crime. Do not attempt it, or you are going to be arrested.’”

Currently, Hungarian authorities have no right to arrest the migrants crossing into the E.U. illegally, even as their numbers have peaked at more than 3,000 per day, at the end of last week. The tide of refugees, mostly coming from conflict zones in Syria, Iraq and Afghanistan, has been part of the largest mass migration into Europe since World War II, and Hungary has already registered around 140,000 migrants so far this year, triple the number who arrived during the first eight months of 2014. Most of them have little interest in remaining in Hungary, but they have to pass through the country to reach the more prosperous states of Europe, often Germany, which expects to receive an unprecedented 800,000 applications for asylum this year, quadruple the number Germany registered in 2014. As a result, says Kovacs, “the whole system is overwhelmed.”

But for the moment, the Hungarian border fence is doing nothing to hinder the migrants’ arrival. Quite the opposite—its construction seems to have triggered a massive rush to reach the E.U. before Hungary shuts the gates. Thousands of people, nearly all identifying themselves to police as Syrian, kept streaming through the gaps in the fence through the weekend, leaving a trail of debris along the railroad tracks that they have used to guide their way north: empty bottles of baby powder, diapers, hand sanitizer, worn-out shoes, used blankets, apple rinds and peach pits. On Saturday night, a full and yellow moon rose to light their way, and local farmers came onto the road in northern Serbia to sell the migrants water, cigarettes and candy bars.

“They seem to be decent people,” said Zoltan Wass, a Serbian citizen who grows grapes and plums on a patch of land along the railroad. Even though the migrants have been picking fruit from his property without permission, he added, “We feel for them, maybe because we know what it’s like to run away from war.”

During the Balkan wars of the 1990s, Hungary was also on the receiving end of waves of refugees, mainly Serbs, Croats and Bosnians fleeing the slaughter. While the Balkan nations suffered through Europe’s first war since World War II, the Hungarians remember the discomfort of accommodating tens of thousands of their less fortunate neighbors. That may help explain why most Hungarians—more than 60%, according to a nationwide poll conducted in July–support the construction of the fence to keep out migrants from Syria and Afghanistan, lands that are far more culturally foreign to them than the nearby Balkans. But that doesn’t mean such measures will work.

Ghafek Aiad Alsaho, another Syrian in his mid-twenties who is trying to flee his country’s civil war, had been living in a Turkish refugee camp for nine months before he heard in July that Hungary was planning to seal its southern border. The news made him realize that it was time to make the journey of more than a thousand miles—through Turkey, Greece, Macedonia, Serbia and into the E.U.—because he felt he may not get another chance. His hometown of Deir ez-Zour, in eastern Syria, is under siege from the militant group known as Islamic State, and he has no intention of going back there. “It’s a one-way trip for me,” he says.

On Saturday, when he arrived at the Hungarian border with Serbia, he knew better than to walk through the gaps in the fence and risk getting caught by the Hungarian police. Under E.U. law, a migrant can only apply for asylum in the E.U. country that first registers his arrival. So most migrants try desperately to avoid being registered by the police before they reach the country where they want to stay.

Alsaho is no exeption. His dream is to make it all the way to Norway—whose citizens are among the wealthiest in Europe— before turning himself in to Norwegian authorities to be registered as an asylum seeker. That meant he would need to travel the length of Europe without getting caught by police. So when night fell over Hungary, he scurried underneath the barbed wire and made a run for it. “It was just me, the forest and the moon,” he says.

But the police were quick to catch him. More than two thousand Hungarian officers have been deployed in recent weeks to help patrol the border with Serbia, and several of them chased Alsaho down and, he says, roughed him up before taking him by bus with other migrants to be registered in a processing camp near the town of Roszke. Arriving there at dawn on Sunday, he stuck his head out of the window of the idling police bus to speak with a reporter. “I’ll be out of here in three days,” he promised in nearly perfect English. “And then I’ll move on.”

That determination was typical of the Syrians at Europe’s doorstep. Their homeland has become an inferno that shows no signs of abating—in four years, half the country has been killed, displaced or forced to flee. Many of them have no homes to which they could return. Even if Hungary’s parliament criminalizes the crossing of its border fence this week and starts putting Syrian migrants in prison, they likely to find another way in, even at the risk of using human traffickers who have little regard for their safety.

Waiting for his smuggler to arrive in the shade of a hackberry tree on Saturday afternoon, al Saleh said he knew of the horrific deaths of 71 migrants whose bodies were discovered inside a refrigerated truck last week in Austria. But the risks of being trafficked across the illegal crossing of a border in Hungary were tame, he added, compared to the dangers he faced in his hometown of Aleppo. With much of that city destroyed amid fighting between the Syrian government and rebel forces, his parents took up a collection among their neighbors and friends so that he could make it to Holland to continue his studies in medical engineering. “They are waiting for me to call,” he says. And no fence is going to stop him. 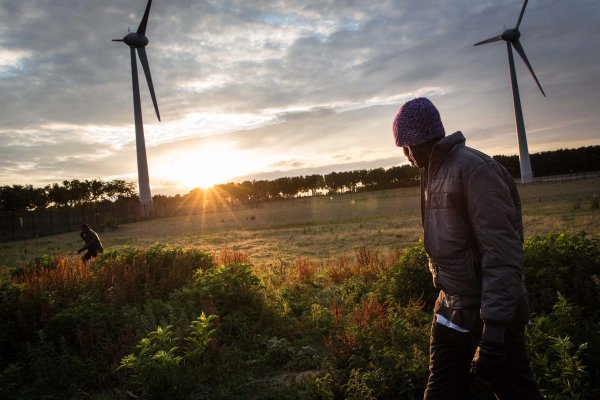 See the Lives of Calais' Migrants
Next Up: Editor's Pick