Wisconsin Gov. Scott Walker is taking aim at establishment rival Jeb Bush in a new video released Monday, criticizing him for refusing to say he’d rip up the pending Iran nuclear agreement should he win the White House.

The hit on the former Florida governor marks one of the first significant attack ads of the cycle to be produced by a GOP presidential campaign. In the web video, Bush is lumped in with “Republicans who don’t know what they stand for,” and is quoted saying he won’t pledge to rip up the agreement on his first day in office.

Walker, meanwhile, is cast as “a strong leader for dangerous times,” shown promising to “terminate it on day one.”

Abrogating the agreement hours after taking the oath of office has been one of Walker’s key campaign promises in recent weeks, and it’s one of the few foreign policy differences in the GOP field. Ohio Gov. John Kasich, New Jersey Gov. Chris Christie and real estate mogul Donald Trump have joined Bush in saying they would review the agreement, but couldn’t pledge to end it. Others, like Texas Sen. Ted Cruz, have taken Walker’s position.

“Governor Bush has repeatedly said it’s a terrible deal, that Congress should reject it, and that if elected he would begin the process immediately to responsibly undo the deal and the damage it has done to our national security,” Bush spokeswoman Kristy Campbell said in a statement. 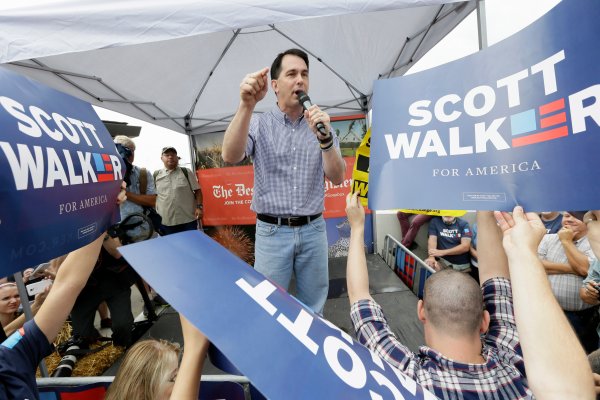