In a 30-second television ad, the images will be powerful: soupy green algae overtaking a river, dead fish floating in brown water elsewhere downstream, a factory’s pipeline spewing millions of gallons of wastewater each day in Florida’s poorest county. It’s an ugly sight, for sure, and one that could worry even voters who are jaded about environmental protections.

Such is the scene from time to time along Florida’s St. Johns River, a 310 mile-long waterway that has struggled for years to accommodate the wastewater coming from nearby factories, water treatment plants and manicured lawns. And that river is poised to get a national close-up as voters consider former Florida Gov. Jeb Bush’s campaign for the White House.

“As he sells himself as an environmentalist, we’ll remind folks that his record doesn’t match that,” said Scott Arceneaux, executive director of the Florida Democratic Party. “He’s going to run on his record here (in Florida) why he should be President. We’re going to remind folks about all the things he didn’t do.”

The Bush campaign declined multiple requests for comment about his environmental record.

Yet while the images of the river look bad, the details of its pollution are less damning. In fact, the pollution spewing forth has declined since Bush first encountered the issue during his first days in in office in 1999.

Georgia Pacific treats wood pulp with harsh chemicals that make its final products such as Brawny paper towels, Dixie Cups and Angel Soft toilet paper sparkling white. But that process, used across the industry, leads to millions of gallons of wastewater every day.

At Georgia Pacific’s plant in Palatka, Florida, the wastewater for the longest time went into Rice Creek. But when that small stream became too polluted, the company and other paper producers in the area started to look for an alternative. What if they could just pump their pollutants further downriver, to a bigger body of water where their waste would have less of an impact?

As Bush took office, environmental groups and state agencies were watching pollutant levels in Rice Creek climb to potentially unsafe levels, especially when the creek was barely moving or had dried up. The pollution transformed the waterway into a river of green sludge, a place where algae thrived and fish died.

Only a fraction of the pollutants can be traced to the Georgia Pacific plant; one half of one percent of the nutrient material going into the St. Johns River comes from the company. Three dozen water treatment plants, along with lawn chemicals from golf courses and gated communities, were also adding to the levels of pollutants in the waterways, so it is impossible to pinpoint specific culprits.

Looking at these reports and realizing the trouble they faced, Georgia Pacific, Champion International and Buckeye Florida asked the newly-sworn-in Governor for permission to build a pipeline that would ship their waste further downstream, into the St. Johns River. There, they argued, the pollutants could be diluted to safe levels. Companies all over the country were doing similar things and continue to this day.

The thinking is this: these chemicals, in small amounts, are fine. Tap water in many places, for instance, contains trace amounts of chlorine. It is not harmful if it’s diluted in a city’s water supply, but no one would suggest you pour yourself a tall glass of Clorox bleach.

Bush gave the companies provisional permission to build the proposed pipeline if the waters in the creek fell outside of acceptable environmental levels. In other words, if the pollutant levels became unsafe, the companies could build a pipeline to pump their waste into a bigger body of water where it wouldn’t be so bad. In one email, Bush, who kept close tabs on the project, said of the pipeline solution: “it is a win, win.”

As expected, the creek’s waters grew more troubled, so Bush’s state Department of Environmental Protections stepped in and said the companies could build the pipeline.

Legal fights immediately ensued. Environmental groups said the pipe did not address the pollutants or their long-term impact. The companies said they were doing more than was required under the Bush-approved permit. Jeb Bush’s state environmental regulators clashed with President George W. Bush’s Environmental Protection Agency. It was a tangle of conflicting rulings that left the pipeline in limbo when Jeb Bush left office in 2007.

In the middle of all of this, Koch Industries bought Georgia Pacific in late 2005. That’s when the lobbying of the Governor got serious—and Democrats started paying closer attention. Charles and David Koch, after all, are some of the most generous patrons to conservative political and advocacy groups in the country.

The Kochs’ role is partially why the non-profit Bridge Project, a Democrat-backed research group that is focused on conservatives’ records, point to the river as a weak spot for Bush.

During Florida Gov. Rick Scott’s winning re-election in 2014, critics also tried to blame him for the river’s problems and suggested Scott backed the pipeline as payback to the Kochs. Now, with Bush running for President, his Democratic critics are ready pick up again on that criticism in the coming weeks and try again.

But the case against Bush is shaky. While he gave approval to the pipeline, he left office without the pipeline being constructed, and fights continue to this day on how to fix the St. Johns. A joint University of North Florida-Jacksonville University study found fish in the river were not considered toxic, but added that residents should not eat more than two meals a week that included fish caught in the waters.

“You definitely don’t want to drink it or swim it regularly,” said Lisa Rinaman, a former top aide the Jacksonville Mayor who now serves as St. Johns Riverkeeper, an environmental defense position. “There’s some metallic taste you get in your mouth out there.” While she said there are not overt visible signs of environmental damage such as fish kills on the surface, data shows there are negative impacts resulting from the Georgia Pacific pipeline.

As for the Kochs, their plant continues to churn out paper products with much improved environmental standards. “These improvements have not only turned the mill’s pulp washing and bleaching system into a state-of-the-art operation, but they have also had a significant impact on restoring and improving water quality in Rice Creek and the St. Johns River,” Georgia Pacific said in a statement to TIME.

In all, the company has spent $250 million on environmental upgrades to the facility. Pollutants are down, and the St. Johns River is coming back. For instance, Georgia Pacific’s plant along the St. Johns has reduced its water use by 40 percent, its phosphorous discharges by 75 percent and its nitrogen discharges by 59 percent, according to company records.

“The record is very clear that not only were we held firmly to meet standards set by state and federal government officials involved, we went above and beyond the installation of manufacturing process improvements before being authorized to construct the pipeline,” the company said in its statement.

Critics are quick to point out that the plant has still be found in non-compliance with the Clean Water Act in 10 of the last 12 quarters, according to the EPA’s report on the Palatka plant.

Yet, even without upgrades, it might not have mattered. Georgia Pacific is the largest employer in Putnam County, and that county remains the poorest in all of Florida. While the river has improved, it’s still fighting the churn of wastewater that makes its way there every day. Environmental groups continue to criticize the pipeline project. Those groups, however, aren’t getting much help from the people the pipeline most directly impacts; those families want the jobs Georgia Pacific provides.

Bush himself, meantime, has bragged about his environmental record. “When I was Governor, I think most people in Florida, they would say—whether they liked me or not—they would say I had a pretty darned good environmental record,” Bush told an audience of the 450 of the most influential conservative donors in the country recently. They were meeting at a private summit convened by none other than network of think tanks, nonprofits and political groups backed by the Koch brothers.

During Bush’s time as Governor, Florida did make strides on its environment. Bush invested $2 billion into the Everglades, backed marine sanctuary projects in the Florida Keys and opposed offshore drilling in the Gulf of Mexico. “I protected Wild Florida; that we cleaned the water,” Bush told the audience. “We started to focus on Everglades restoration.”

But his role in the St. Johns Pipeline is one Democrats plan to hammer in the coming week. But Bush can easily say he was working to keep an industry—and jobs—in Florida. As environmentalist Rinaman acknowledges: “There’s no market for brown paper towels.”

UPDATE: This story has been changed to clarify that Lisa Rinaman, an critic of Georgia Pacific’s environmental record, does not support Bush or the pipeline.

Read Next: Obama’s Trip to Alaska Shows Both Sides of His Climate Change Legacy 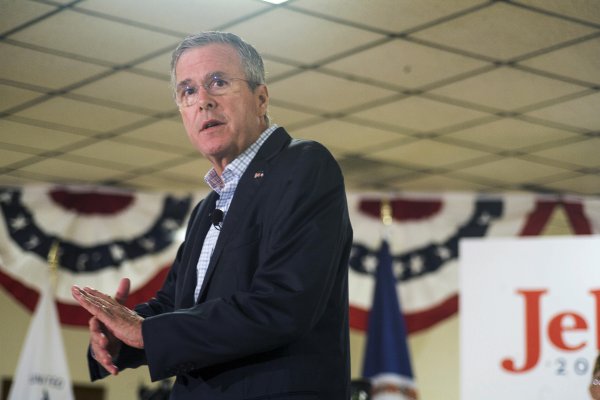 Why Jeb Bush Is Taking a Right Hook to Trump
Next Up: Editor's Pick