Nicki Minaj stole the VMAs from the ceremony’s host with a single line.

Accepting a trophy for her “Anaconda” video, Minaj thanked her pastor, and then referenced Miley Cyrus, who said in a New York Times interview recently that Minaj was “not too kind […] not very polite.”

Said Minaj: “This bitch that had a lot to say about me the other day in the press. Miley, what’s good?”

Cyrus, usually so game, seemed dumbstruck; onstage to do a planned bit, she blandly trailed off with a statement beginning, “We’re all in the industry, we all do interviews, and we all know how they manipulate…” Of course, Cyrus had hoped to be the only person onstage speaking her mind. But Minaj’s ability to be impolite took her, somehow, by surprise.

This may, of course, all be a bit: Taylor Swift and Nicki Minaj’s purported “feud” over the nominations for Video of the Year ended with the pair duetting in the ceremony’s opening number, and Minaj had a smile on her face as she delivered her comments. But something about Cyrus (usually so assured) grasping for words seemed to prove this was an unusually real awards-show moment.

Read next: At the VMAs, Kanye West Enlivens A Show Built Around Old Narratives 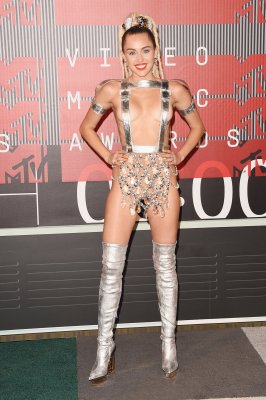 Miley Cyrus Gives Her Dad a Shoutout in VMAs Opening Monologue
Next Up: Editor's Pick