Donald Trump speaks during a news conference ahead of a rally at Grand River Center in Dubuque, Iowa, on Aug. 25, 2015.
Daniel Acker—Bloomberg/Getty Images
By Philip Elliott / Manchester, N.H.

The Summer of Trump is on the cusp of becoming The Autumn of The Donald. Just don’t expect everyone in the party to like it.

Talk to New Hampshire Republicans and the conversations eventually turn to Trump, the billionaire braggart who is atop national and local polls. This public fascination with Trump, GOP voters say with a mix of disbelief and disgust, was not supposed to have lasted this long. But as summer comes to a close, they cannot avoid it. Candidates now are adjusting their plans for a fall campaign, trying to keep their heads down and avoiding Trump’s signature barbs.

“Don’t get me started,” Manchester resident Vasoulla Demos said as she waited to meet New Jersey Gov. Chris Christie at a weekend Greek festival. “I cannot even talk about it. Here’s Chris Christie, talking with voters. And Donald Trump,” she trails off, shaking her head. “Don’t we have enough troubles in this country already?”

As Demos chatted with TIME, Christie was making his way through a church parking lot, hugging some admirers and kissing others at the end of a long day of campaigning. He had conducted two marathon Q&A sessions where he answered questions about anything voters brought up: gun rights, veterans’ benefits, drug abuse and addiction, foreign aid, even his kids’ summer jobs. Now, he was talking about loukoumades and gyros at that Greek festival. To an aide, he kept passing a seemingly endless supply of sweets.

“You just run your race. Because as it stands, right now, nothing and no one is having an influence on Donald anyway. Right? So why try to? It doesn’t make any sense,” Christie tells TIME in an interview. “I can’t worry about anyone else. I have enough to do on my own.”

His keep-your-head down approach is one shared by his rivals. A day earlier, Sen. Lindsey Graham of South Carolina met with small-business owners to talk about his White House hopes. And a day later, Sen. Ted Cruz of Texas visited a bee farm, a church and a roadside lobster stand.

Despite embracing the traditional New Hampshire way of campaigning—person-to-person pitches, organizing grassroots leaders and recruiting volunteers—each of these candidates is badly trailing Trump. Christie, a onetime establishment favorite, has not yet caught fire but is quietly building a list of potential supporters. Graham is tailor-made for conservatives who place national security atop their list but isn’t connecting with voters. (Graham is at risk of being excluded from an upcoming CNN debate.)

And Cruz, a Tea Party firebrand, is counting on Trump’s support to flame out and his backers to turn to him. “We’re running a grassroots campaign, one that goes person to person, one house at a time. That’s the New Hampshire way,” Cruz said.

This trio, which spent the weekend in New Hampshire, embodies the constituencies that form the modern GOP. But they have been sidelined. The campaign’s traditions and rules have been upended by celebrity and bombast.

Take Trump’s trip to New England this weekend. He skipped New Hampshire and opted for a 2,000-person confab behind high fences and velvet ropes on Friday evening near Boston. Three helicopters circled overhead as though they were covering the Super Bowl and not a showy annual event organized by a car dealer.

Again, he promised to build a massive wall along the U.S.-Mexican border. It won him cheers. “The Great Wall of China is 13,000 miles. This wall is 2,000,” he said. “Give me a break. It’s so easy, it will be great.” He then pivoted to an unfounded attack on a longtime senior adviser to Clinton; Huma Abedin, Trump suggested without any evidence, was passing classified information to her husband.

There is no predicting what is to come next from Trump. The never-before-elected candidate is tapping into voters’ frustrations with Washington and career politicians. His take-no-prisoners approach is attracting the attention of previously uninvolved potential voters; that is a potential boon for the GOP that has struggled to attract newcomers. One senior adviser to a rival candidate acknowledged that the 24 million viewers who tuned in to the campaign’s first debate was a win not just for Fox and Trump, but also for others candidates, whom most Americans had never met.

Trump’s never-ending criticism of the nation’s immigration system—and at times incendiary language about immigrants themselves—also complicates the Republican Party’s efforts to win over Hispanics, a voting bloc that is crucial in picking the President. Trump’s criticism of women, too, is turning off female voters who are unaccustomed to White House hopefuls being so personally disparaging to a gender.

“He’s a builder. He’s building a wall—between us and Hispanics. The wall is not the Trump Wall with the border. It’s a political wall,” Graham tells TIME. “He’s driving a wedge between us and women, calling young women ‘bimbos’ and calling immigrants ‘rapists‘ and ‘drug dealers.’ That’s the last thing we should be doing.”

Yet Graham and the others are being challenged by the same voters Trump is energizing. During one event this weekend, Graham told voter Euclid Dupuis that he understood his frustration. “No, not frustration,” the 76-year-old former CPA interrupted. “Disgust. Disgust.”

“We’re disgusted with politicians telling us they’re going to do one thing and then we never see it happen,” the Bedford resident said after the event, pointing to Republican promises to defund Democrats’ health care law and to block Obama’s executive actions that spared some immigrants deportation. “Don’t tell us you’re going to do something if you’re never going to do it.”

Yet Dupuis is leaning toward Cruz or Sen. Marco Rubio of Florida, both first-term Senators. What about Trump? “He’s too in your face,” the retiree said. “There is no way people stick with him once they start imagining him actually doing the job. This is all a distraction.”

Similarly, Adam Lord is measuring Trump’s time in the spotlight in hours, not weeks. “He’ll self-destruct, implode at some point,” the 30-year-old accountant from Manchester said after the same Graham event. “Trump is not going to be the nominee.”

After a Christie event a day later, 66-year-old Bess Arnold had a similar view as she gave her contact information to a Christie aide at the Greek event so she could volunteer. “People are going to see him for what he is,” the Merrimack retiree said of Trump. “This can’t last.”

And Sandra Sanborn waited after Cruz at a shabby seafood shack on Sunday afternoon. The 67-year-old Seabrook woman said Cruz is her favorite candidate but she gets the appeal of Trump. “He’s saying what we’re all thinking. He’s giving us a voice,” she said. “I just think people are still watching and waiting, and they’ll see that Ted Cruz is saying the same things but with a better chance of winning.”

Winning is the often implicit—and at times the explicit—pitch these underdog candidates are trying to use. Imagine, Graham says, a Trump campaign against Clinton. “The balloon pops itself,” Graham said. “This is an entertaining man, but he’s all over the board. He doesn’t understand America’s political or legal system.”

So these candidates continue to visit New Hampshire in the traditional manner. Take Christie. He spent his Saturday morning at a VFW hall in Laconia and then went to a farm where Mitt Romney previously campaigned in the final days of his 2012 primary. When one voter asked about his slouching poll numbers, Christie urged them to keep the faith.

“You know what things looked like at this point four years ago? Herman Cain was at 30%. You know who was in second? Michele Bachmann,” Christie told supporters, asking them to keep talking to their neighbors. “No one is voting for five-and-a-half months. That’s a lifetime.”

But in the back of the barn, one Trump ally was only half-listening. He went to the Christie event in case Trump could be persuaded to have an event in Center Tuftonboro. “We can put the press in that barn,” he said. “The crowd can be out there. And we can land his helicopter over there.”

That larger-than-life approach to campaigning is part of Trump’s appeal. It also might be his undoing in New Hampshire, a state where the cranky yankee voters are fiercely protective of their traditions.

Traditions, it is worth noting, might be off-limits to Trump even if he wanted to try his hand at a sustained small-event campaign. “We’re not doing house parties any more,” said state Rep. Stephen Stepanek, Trump’s co-chairman for New Hampshire. “The crowds are too phenomenal. Finding a venue big enough to handle Mr. Trump’s phenomenal crowds is tough.”

It’s also unclear if Trump’s public support will remain steady. Even those who forked over $100 on Friday see Trump—he insisted it was not a fundraiser despite instructions at the front gate about on how to write a check to his campaign—not everyone was necessarily a Trump backer. Cindy Liquori, a 49-year-old small-business owner, drove to the Norwood, Mass., event from Suffield, Conn. “We love him,” she said, giddy to see the former reality star. But, she adds, she had planned to back Clinton before Trump got into the race. If he isn’t the nominee, Liquori said she might go back to supporting Clinton.

And therein lies the unknown for Republicans, who are watching the race with plenty of amusement and even more apprehension. After all, it’s one thing to tell a pollster in August that Trump is the favorite; it’s quite another to have that view when the ballots start being cast.

“I want to see what the hoopla is about,” said Laura Hausle, a 50-year-old Newton, Mass., resident. She also attended Trump’s New England event even though she is backing Rubio and has donated to his campaign. She didn’t want to miss the spectacle of Trump’s campaign while it lasts, though. “You only live once, and this is a once-in-a-lifetime candidate,” she said, before laughing at her party’s unexpected summer fling with Trump. “I hope.” 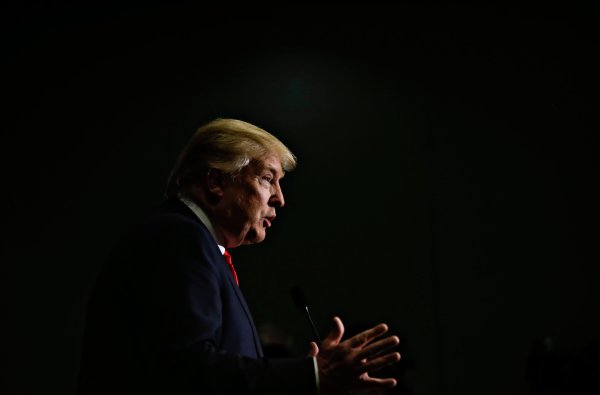