People look at a row of downed trees after they were knocked down during a windstorm on Aug. 29, 2015, in Lynnwood, Wash.
Joshua Trujillo—AP
By Jack Linshi

Two people were killed on Saturday in a powerful Seattle-area windstorm that left nearly half a million residents without power, authorities said.

Police said that golf course manager James Fay, 36, of Gig Harbor died after a tree fell on his car while driving home from Costco with his daughter, who was uninjured, the Seattle Times reports. Another victim, Samara Iereneo, 10, of Burien, was killed by a falling tree branch while attending a birthday party at a friend’s home, police said.

About 463,000 people across the Pacific Northwest lost power due to the high-speed winds, which were up to 63 mph in some parts of Washington. The gusts also led to several road and highway closures due to falling trees and branches. 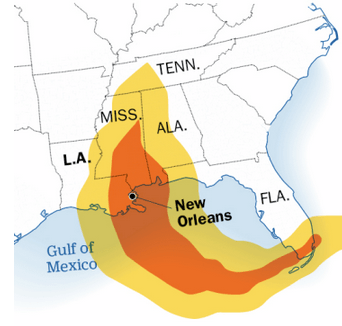 This Graphic Shows How Hurricane Katrina Changed New Orleans
Next Up: Editor's Pick