Donald Trump during a news conference ahead of a rally in Dubuque, Iowa on Aug. 25, 2015.
Daniel Acker—Bloomberg via Getty Images
Ideas
By Jack Dickey

A bundle of political-journalism concerns (including this magazine) have in recent weeks dwelled on the apparent rise of Donald Trump, the political novice who has found himself atop several polls for the 2016 Republican presidential nomination. The reasoning is simple enough: Trump, the thinking goes, has offended enough people on the campaign trail (and carries enough baggage from 30 years in the public eye) that his bid should have long ago lost whatever pulse it had; that he has, if anything, gained support surely signals an American irrationality worth investigating.

Do these analyses spend our time wisely? FiveThirtyEight says they don’t, with the first primary not until January, and with talking on the phone to a pollster having little in common with going to a voting booth. To wit: In August 2011, Michele Bachmann led in Iowa; she would finish sixth in the January caucuses. For its part, the Upshot contends that Trump’s polling lead is weakest (although still extant) among Republicans who have a history of actually voting in recent primaries. There’s reason beyond those metrics to doubt the significance of the Trump surge. He’s a bona fide celebrity in an awfully crowded field, giving him a natural but temporary advantage. When the herd thins and the runners-up of today find themselves with more airtime, Trump’s ubiquity will seem less imposing. In 1992, Pat Buchanan, whose platform looked a little like Trump’s, managed his strongest showing of all in the first primary, never matching the 38 percent he had in New Hampshire.

Then again, it’s dreary August, and, what—we’re supposed to fixate on baseball, when the greatest show on earth is on tour? The best way to experience the Trump 2016 campaign is to let it wash over you: to appreciate the silk ties, self-aggrandizing non sequiturs (“I have one of the great memories of all time,” he told The Hollywood Reporter) and celebrity feuds he still can’t put aside as a signature American grotesquerie—perhaps, indeed, one of the greatest of all time. Even if you find his scattershot positions or boorishness too noxious for amusement, you can change the channel or click over to another browser tab, reassured, with the Republican convention 11 months away, of just how little is at stake this summer, and how little his so-called support matters. (Though taking true under-one’s-skin offense at anything Trump says or does may give him too much credit.)

Truly analyzing Trump goes beyond the mere rubbernecking I just advocated, and it’s a tricky practice. The impulse that prompts such investigation is surely a good one—it treats, somewhat optimistically, the political process as an essentially pure expression of the people’s will. It declines to disregard opinion polls. The words of the humble rally-attender take on great importance in this world, while the elites for once have to pipe down and listen.

What, though, if the views a citizen (not even a voter, because no voting has happened yet) holds are insincere or likely to change? What if the rallies’ vox populi are simply a playback of what’s on cable news? What if he’s refreshing to voters the same way a bucket of ice a would be—on the ground in a hot second, melted in half an hour, and evaporated by nightfall? It would be shortsighted and futile here in August to let a celebrity entrepreneur tell us anything ostensibly meaningful about our national character, not least because there’s little reason to think those conclusions might be true.

But that hasn’t seemed to stop the presses. Far from it, to judge by among other works a feature in this week’s New Yorker. The magazine embeds with, chronicles and conflates two bands of Trump supporters (disaffected conservatives and white supremacists), never mind that they’re entirely distinct in size and motivation, to argue that Trump has illuminated and, worse, strengthened a long-dormant strain of American nativism. This view relies on that most liberal-arts stand-by—close reading—to tie Trump to the paranoid style identified long ago by Richard Hofstadter. Most felicitously for its premise, white nationalists come to endorse Trump’s campaign (so has David Duke), and one watching the debate in Cincinnati suggests Trump is actually dog-whistling to them. I don’t immediately comprehend how someone so relentlessly blunt could be perceived as a dog-whistler—it’s as though the metaphor was deployed by someone (say, an avowed white supremacist) whom a reader might suspect to be irrational.

How rewarding can close-reading Trump possibly be? He toggles between the impossibly vague (“Trade? We’re gonna fix it. Healthcare? We’re gonna fix it. Women’s health issues? We’re gonna fix it.”) and the especially literal (not only has he insisted he will build a wall along the entire border with Mexico, and that Mexico will pay for it, but he has said “I want it to be so beautiful because maybe someday they’re going to call it the Trump wall”). He said of the 11 million undocumented immigrants in America, “They’re bringing drugs. They’re bringing crime. They’re rapists. And some, I assume, are good people.” What is hiding under that?

The fact that Trump spends more time in the hippy-dippy, rah-rah, make-our-country-great-again character than in Joe Arpaio mode would suggest, too, that a lot resonates with his supposed supporters before they even begin to consider his immigration stance. As one told focus-grouper Frank Luntz, “We know his goal is to make America great again. It’s on his hat.” Behold, yet another radicalized American.

If Trump has done anything even semi-permanent—if he has done anything at all—he has disrupted the campaign choreography designed long ago and implemented anew each election cycle by the immovable professional political class and the shadowy donors who pay their salaries. He has haphazardly but valuably spoken about the toxicity of money in politics—a protest worth staging now more than ever.

To fret too much over Trump’s alleged rise, and even pathologize it, is to undersell the good work his omnipresence has done, however inadvertently, in undermining a broken political system. The great challenge ahead, to be sure, comes in rebuilding it. Anyone know a good builder? 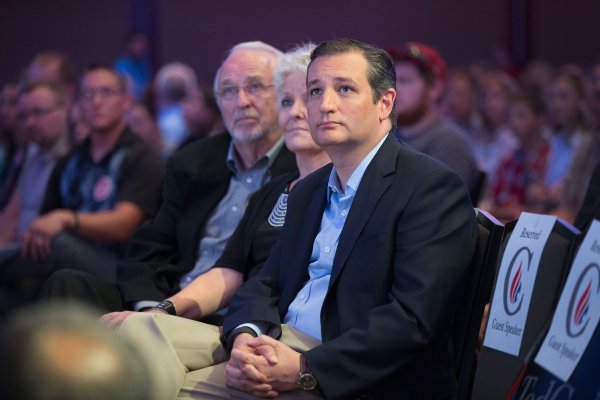 Marriage Equality's 'Reign of Terror' Is in the Past—Not the Present
Next Up: Editor's Pick