Here's Your Guide to the 2015 MTV Video Music Awards

The 2015 Video Music Awards will air on MTV this Sunday at 9/8c p.m. Here’s a rundown of what you need to know, from slated performers and key categories to nomination controversies and the most important moments to watch out for:

Who’s hosting? Miley Cyrus is your guide to the night’s festivities, which is choice casting: as far pop stars go, Cyrus is unfiltered in the personality department, and her 2013 performance was one of the most outrageous in VMA history—up there with Madonna’s bicurious liplock with Britney Spears and Christina Aguilera (a noted fan of Cyrus herself). Cyrus embodies what the VMAs want to be remembered for, and the network is rewarding her for it. “We’re giving her pretty free reign,” VMA executive producer Garrett English told Entertainment Weekly. “Obviously there are standards and various other things that were always a part of it, but no, [no rules].”

Remind me what the Taylor Swift drama was again? Drama surrounding this year’s event began way before the actual event. After Nicki Minaj’s “Anaconda” wasn’t nominated for Video of the Year, the rapper spoke up on Twitter about the way black women’s contributions to popular culture are sometimes ignored by the media. Taylor Swift thought this was a personal attack, so she fired back, tweeting that it was “unlike [Minaj] to pit women against each other” and suggesting that one of the male artists took her spot instead.

Backlash to Swift’s tone-deaf response was, well, swift, so she apologized on Twitter later that week for making Minaj’s point about society at large all about her. (Swift also extended an invite for Minaj to join her on stage if she wins the award.) Minaj accepted Swift’s apology, and all was good in the land of pop divas until Katy Perry got involved. Long rumored to be the inspiration of Swift’s song “Bad Blood,” Perry accused Swift of being hypocritical for preaching girl power yet exploiting their feud with the spectacle that was the “Bad Blood” video. Swift and Perry haven’t exactly patched things up since.

What are the awards I should pay attention to? Taylor Swift, Kendrick Lamar and Ed Sheeran are the most nominated acts this year, though one of the night’s biggest awards, Video of the Year, will probably come down to Beyoncé (whose GoPro-style “7/11” made you want to buy a Kale sweatshirt) and Taylor Swift (who made a mini superhero movie out of celebrity BFF-dom). We’ll see if Nicki Minaj gets her due in the Best Hip-Hop Video category, where she is nominated; and it’s worth keeping an eye on the Artist to Watch category and whether it will acknowledge the innovative FKA twigs, who topped TIME’s best albums of 2014 list, over more mainstream nominees like Fetty Wap or Vance Joy (who’s currently opening for Swift on tour).

Which performances should I be tuning into? Nicki Minaj just announced that she’ll be opening the show after doing the same with Ariana Grande and Jessie J last year; The Weeknd will cap off his unlikely rise from debaucherous mixtapes to pop stardom when he performs “Can’t Feel My Face”; Demi Lovato will prove why she’s hitmaker Max Martin’s latest muse with “Cool for the Summer”; Macklemore and Justin Bieber are probably the most polarizing guests slated to appear, but you probably should tune in anyway to see them perform the new songs that will be playing everywhere this fall whether you like them or not. Other performers include Nicki Minaj, Pharrell, Tori Kelly, Bruno Mars, and A$AP Rocky with Twenty One Pilots. And while it’s not actually a performance, Taylor Swift is premiering the music video for “Wildest Dreams,” which may end up winning a few trophies next year given the luck she’s had these past few months.

(MORE: The Rise of the Weeknd: “I Want to Make Pop Cool Again”)

Which artist from the pre-show is main-stage ready? Last year, Charli XCX took her Fault in Our Stars soundtrack hit “Boom Clap” to the red carpet, but the singer’s obvious charisma (and the exceptional quality of last year’s punky Sucker) proved she could have graduated to the main event. This year, two acts are warming up the crowd: Walk the Moon and Nick Jonas. The former had a sleeper hit with “Shut Up and Dance,” but Jonas’ new single “Levels” is basically bringing “SexyBack” back in a way that suggests he’s ready for the next, uh, level.

Will MTV crown this year’s Song of the Summer? MTV is hardly the sole decider here, but the award show could help music fans finally come to a consensus. For a song to own that designation, there has to be a sense of ubiquity. It doesn’t matter how much you love that Jamie xx song “Good Times”—if it’s not blasting out of every grocery store, it can’t claim bragging rights. There also has to be a sense of fun: “See You Again” from Furious 7 dominated the charts, but it’s a total bummer of a song. MTV has a Song of the Summer category this year with 11 nominees, though some are more worthy than others: T-Swift, Fetty Wap, OMI, the Weekend and Diplo (who has two contenders, one with Major Lazer and MØ, the other with Justin Bieber and Skrillex) should be frontrunners for this seasonal designation given their recent dominance.

What’s this award they’re giving Kanye? The Michael Jackson Video Vanguard Award, which is MTV’s version of a lifetime achievement award. Like Cyrus, West has also provided one of the most memorable moments in VMA history—Swiftus interruptus!—though some have wondered whether his videos, however much they did to popularize shutter shades, really are a defining component of his legacy at this stage in his career. (MTV likes to reward talent young—Madonna got this trophy in 1986, and who knows what surprises last year’s recipient Beyoncé is going to drop on us in the next few decades.) But anytime West has a platform to speak his mind, it’s worth tuning in. Plus: maybe he’ll take a cue from Bey and bring his family up on stage when he accepts the award. 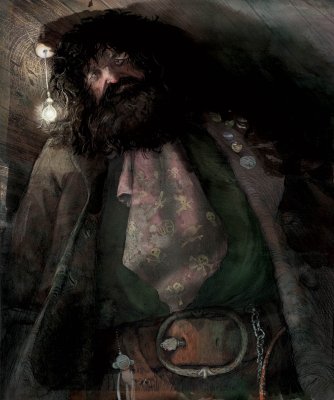 J.K. Rowling Has Revealed A Heartbreaking Truth About Hagrid
Next Up: Editor's Pick