In Matthew Broderick’s new movie, the star who audiences have loved since Ferris Bueller takes another kind of “day off”—a “dirty weekend,” or a break from his regular commitments to indulge in a sexual adventure.

TIME caught up with Broderick to talk about sex comedies, favorite roles, and the upcoming 30th anniversary of his most iconic role.

TIME: What drew you to Dirty Weekend?

Matthew Broderick: I liked Neil LaBute already, knew him a little bit. We’re neighbors. I actually met him in a hardware store the first time. He said, “I’m Neil Labute.” And then I read that script and it was unusual—kind of a part that I don’t always seem to get. I don’t know that I even fully understood it or whatever, but I really liked it. I was really interested in the story and these two characters.

He’s funny. He can write about awful things—or not awful, because our movie, people aren’t doing wretched things to each other as they sometimes do in his stories—but he doesn’t really judge the characters. They’re flawed, and he doesn’t preach. He’s not smarter than the people who the story is happening to. I like that.

How was doing a movie that’s so based around sex different from other films you’ve done?

The movie is one extremely private conversation after another between two people who don’t know each other very well. It’s different than a light comedy that takes place in a drawing room. We’re brutally honest with each other. And it’s embarrassing, always, to talk about anything sexual, but I had a great partner in Alice Eve, and in Neil, and we just all talked about everything and all felt very comfortable with each other, really from the beginning.

How do you think the sex comedy genre has changed in recent decades?

If you got a little more distance, you’d probably go, “Oh, they’re all exactly the same.” But right now they feel more [like] they go farther. I’m not sure in the ‘30s there would be a sex comedy about two people who are not involved in each other, who talk about others. But on the other hand I’m probably wrong, there’s probably some Ernst Lubitsch movie that’s exactly this.

I did expect at the beginning that the two characters would end up with each other.

Yeah, Neil was always very happy that they didn’t. I always was like, “I think he would at least try something at one point.” Because they’re alone in this town, and I just thought that might happen. But he was insistent that that was not this story. He really liked that it was a man and a woman being pals.

You’re about to star in Sylvia on Broadway, and you’ve played so many iconic roles on stage. What other roles would you still like to do?

I don’t know, I wish I did. People every now and then tell me, “You pick something! What play would you like to do?” I’ve even had directors tell me that. And I’ve discussed things, but I never really managed that. Now that I’m about to do a play, of course, I would like to do more film. But when I’m about to do a movie, all I want is to do a play. So that’s my lot in life.

What movies, TV shows, plays, music or books are you paying attention to lately?

I just saw the opening night of Hamilton, and newsflash—I really loved it. I was basically teared up from the moment it started, I just thought it was so thrilling. I read The Goldfinch over the summer, and I’m late on that I guess, but I loved that. The other plays that I’m sure I’d love I haven’t seen because I finished my play and went on vacation—I really want to see The King and I, I want to see The Curious Incident.

Ferris Bueller’s Day Off turns 30 next year, and I’m sure there will be tons of anniversary coverage.

How do you feel about that line that people still quote all the time? “Life moves pretty fast. If you don’t stop and look around once in a while, you could miss it.”

Well, it’s true! It moves exactly the speed that it moves. There’s nothing to do about it. It seems to mean a lot to them and I’m very happy that it does. It’s something that’s been said a lot, I don’t think that Ferris Bueller is the first person to say, “Stop and smell the roses,” but it was put in a way that’s very accessible for young people of my generation, and that’s nothing to sneeze at. The whole movie, I can now say, really hit a nerve. And I’m not at all taking credit for that. But John Hughes and whatever it is, undeniably, I had no idea it would stick around this long. No idea.

What’s your favorite role that you’ve played in your career?

I mean, I liked that. I liked Brighton Beach Memoirs, which I did with Neil Simon, I kind of was playing him, as Eugene Morris Jerome, and I played that a few times at the very beginning of my career. I always feel bad saying that, because it sounds like nothing else lived up to it. But the other would be early too, Torch Song Trilogy, which I did even before that. I’m proud of different characters at different times. I never like the whole thing. I like Election, I like Glory, and a bunch of little ones that nobody saw that I like. I beat myself up a lot, but then usually when I actually make myself watch something I’m in, I usually like at least something about it, or myself in it. I don’t like watching myself age. But I do think, “Oh, that was good, I got a good laugh there.”

Are you not a watcher of your own movies?

No, not very much. When I started I did. I can remember when there were dailies, and we would all go to dailies together, but now, people don’t even do that. Everything, you can watch on your computer. So I got out of the habit years ago of going to dailies. And then gradually, I’ll see a movie because there’s a premiere or I have to do press about it, but other than that, I almost wouldn’t even, I like doing them more than I like watching them, because I can’t fix anything once I see it. It’s kind of frustrating. But I think it’s also, to be honest, vanity. I don’t like hearing my voice and looking at myself—it still sort of freaks me out. I’m afraid I won’t look enough like George Clooney to satisfy myself. 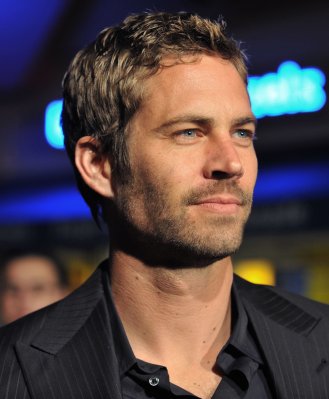 Watch a Behind-the-Scenes Clip of Paul Walker in Furious 7
Next Up: Editor's Pick