In call after call, Joe Biden sounds ready to go. He is upbeat and positive. Working a Rolodex that goes back to the early 1970s, he barely mentions Hillary Clinton. In one recent chat with a supporter from South Carolina, Biden’s voice rang hoarse, as though he had been on the phone for hours. He told her that he had beaten a stutter as a young man through hard work and determination and that he had faced tougher challenges than running for President. Even with a late start, he was not intimidated.

But will he or won’t he? Even Biden isn’t sure. In conversations over the past month from his home in Delaware, a rented vacation house in South Carolina and the Naval Observatory in Washington, the Vice President has made it clear to his allies and friends that a decision to seek the Democratic nomination will come down to matters of organization and fundraising, whether he stood a shot at the job and the impact of a punishing race on his already bruised family.

Biden has run for President twice before–in 1988 and 2008–and each time he dropped out earlier than he had planned. Two years ago, talk of a third run became virtually taboo when Beau Biden, the eldest child of the Vice President, was diagnosed with brain cancer. But before Beau died in June, he asked the man he called Pop to promise he would make a third run at the White House.

Biden didn’t make that pledge, advisers say, but he is now asking his inner circle what it would take to honor it. So they have spent much of the past few weeks sitting around the same tables where the Biden family members often waited for the patriarch’s train to return every night from Washington during his 36-year Senate career. It is neither impossible nor too late for Biden to seek the job he has always coveted. Clinton’s nomination is no longer inevitable. Vermont Senator Bernie Sanders is turning out massive crowds even though few expect the self-described socialist to block Clinton. And after a lifetime in public service–he was elected Senator at age 29–Biden might be due a break.

So the Biden machine–a somewhat disjointed collection of family members, pollsters, veteran aides and a handful of longtime donors–has kicked back into gear. They helped him gather names of other likely allies. Party activists and leaders in the early nominating states began getting calls from blocked phone numbers. National leaders in Washington won invitations to meetings at his official residence, the Naval Observatory. The compound’s closest entrance is a quick 10-minute walk from the front door of Clinton’s house in the District.

These were nominally private sessions, but details leaked to reporters almost instantaneously. Biden met on Aug. 22 with Senator Elizabeth Warren of Massachusetts, a populist firebrand who disappointed the left wing of her party when she refused to challenge Clinton. Two days later, over lunch with President Obama, Biden discussed the rigors of a 2016 race. No promises were made and no endorsements offered, but Obama did give Biden his blessing to move forward with a campaign if that’s what he really wanted. That night, Biden had the first of a series of brainstorming sessions at the Observatory. His first guests were Obama’s former communications maven, Anita Dunn, and her husband Bob Bauer, who worked as Obama’s campaign and White House counsel. They discussed how to talk about an economy that is improving, albeit slowly, for the middle class, a longtime interest of Biden’s and perhaps a hint about the message of a nascent campaign.

And yet every conversation leaves Biden’s loyalists less certain about his intentions. Some have given up trying altogether. State representative Dan Eaton, for instance, was huddled with fellow New Hampshire Democrats in search of a way past a budget stalemate when one leaned forward: “What’s going on with the Vice President?” Eaton, perhaps Biden’s biggest cheerleader in New Hampshire, told the truth: he knew as few specifics as they did. “If he jumps in,” the co-chairman of Biden’s 2008 run tells TIME, “I’ll be with him.” His fellow lawmakers turned back to their budgets. Like Eaton, they knew that caveat–the if that has hung around for so long that it threatens to become Biden’s slogan.

After the 2012 campaign, some of Biden’s allies encouraged him to start planning for 2016. Set up a political operation outside the White House, they told him. The Vice President said no. At the time, he said, Beau Biden, running for Delaware attorney general, needed the political cash more than Joe did, and it’s tough to tell a dad to be selfish. Partly as a result, Biden lacks any form of political machine or funding network, let alone the type Clinton enjoys. Many of the logical figures to lead a Biden campaign are already working for Clinton. A pro-Biden super PAC is promoting Biden but cannot fill the void of the lack of a real campaign apparatus.

None of that erases Biden’s deep interest in the job or the fact that this is his last shot at it. The Vice President has long believed he has the dealmaking skills that other senior Democrats lack. And in calls to activists, Biden sounds very much as though he has decided to run. Yet those who know him best warn that just because Biden wants to hear the argument for jumping in doesn’t mean he will. Privately, aides said he worries deeply about the impact a race would have on his loved ones.

To join the race, Biden doesn’t need to be convinced that he is guaranteed a win. That’s not how American politics should be, he tells friends. But he needs to see that a campaign isn’t hopeless, and there is some evidence for that. A Suffolk University poll of Iowa caucusgoers shows Biden carrying 11% support despite having done nothing in the state. Dave Nagle, who served in Congress from 1987 to 1993, cautions that the time Biden spent courting grassroots activists during his earlier bids may take the Vice President only so far. “Nobody made more friends,” Nagle said, “and got fewer votes in the history of the Iowa caucuses.” 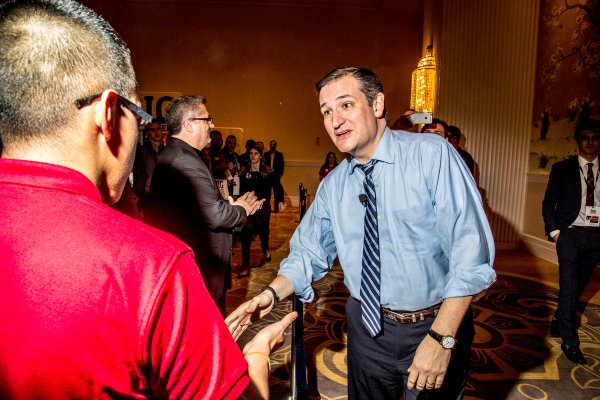 Ted Cruz: Right Turns Only
Next Up: Editor's Pick