The Mayor of Venice, Home of the Kitschiest Carnival, Wants to Ban Gay Pride for Being Too Kitsch

Luigi Brugnaro looks over during the Lega Basket Serie A match between Umana Venezia and Armani Jeans Milano at Palaverde in Treviso, Italy, on Dec. 11, 2011
Arturo Presotto — Iguana Press/Getty Images
By Joanna Plucinska

Venice’s newly elected mayor, Luigi Brugnaro, wants to ban gay-pride parades in the Italian city because he thinks they are the “height of kitsch.”

“There will never be a gay pride in my city,” Brugnaro told La Repubblica, an Italian daily newspaper, on Wednesday. “Let them go and do it in Milan, or in front of their own homes.”

Italy, a largely Roman Catholic country, is one of the only Western European countries to deny both civil partnerships and gay marriage to their citizens, Reuters reports. The government is presently having trouble passing legislation to legally recognize same-sex partnerships.

Flavio Romani, the president of Italian gay-rights group Arcigay, told Reuters that his organization has hosted gay-pride parades around the country for years.

“Venice is not [Brugnaro’s] city. At the moment he is governing it, but he won’t last long given the fool he is making of himself,” Romani told Reuters. “Sadly in this country, some politicians listen more to what the bishops tell them rather than what society is saying.”

Brugnaro, elected in mid-June on a center-right platform, pulled 49 books featuring same-sex couples from school libraries in the city earlier this month.

Openly gay pop icon Elton John was quick to respond to Brugnaro’s books move. “Beautiful Venice is indeed sinking, but not as fast as the boorishly bigoted Brugnaro,” John said in a post on his Instagram account. 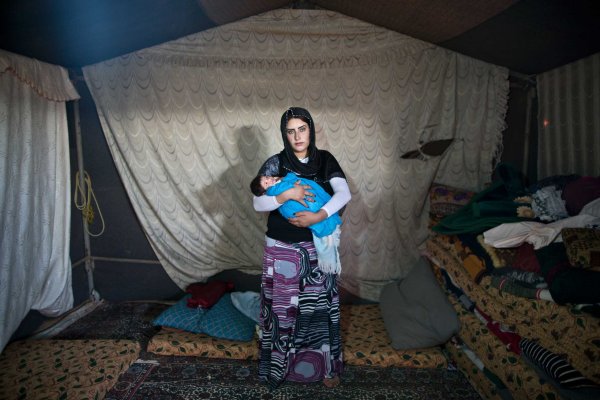 Heartbreaking Photos of Syrian Refugees and Their Newborns
Next Up: Editor's Pick