Members of Germany’s Social Democrat Party (SPD) were forced to evacuate their headquarters in Berlin on Tuesday following a bomb threat and hundreds of racist emails and phone calls.

The party, a member of Germany’s ruling coalition, said the threatening emails began pouring in since its chairman Sigmar Gabriel visited the eastern town of Heidenau on Monday, where violent protests have erupted over the arrival of about 250 refugees, reports Reuters.

Gabriel, who is also Germany’s Vice Chancellor, denounced the antirefugee demonstrations after far-right protesters attacked police, who were escorting asylum seekers to a local shelter over the weekend.

“They think of themselves as defenders of the real Germany. In truth they are the most un-German people I can think of,” he told reporters.

German Chancellor Angela Merkel also condemned the protests, reports Agence France-Presse. She is due to visit Heidenau Wednesday and plans to meet with refugees and aid workers at a local asylum seeker shelter.

Nothing suspicious was found at the SPD headquarters, but the party said the threats were a “political act.”

The racist emails are evidence of an antirefugee sentiment among a small number of Germans as thousands of asylum seekers fleeing war and persecution in Africa and the Middle East enter the country. Germany is expecting to receive 800,000 asylum seekers this year — four times higher than in 2014.

On Tuesday, a suspected arson attack destroyed a school sports hall in the town of Nauen, west of Berlin, that was intended as a temporary shelter for refugees. Police say the fire at the hall was started deliberately, reports the BBC. No one was injured.

The blaze is the latest in a string of attacks against refugees and asylum centers in Germany this year. 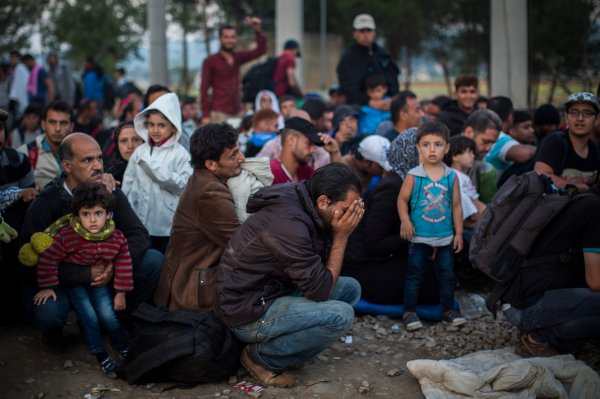 3,000 Refugees Expected Daily in Macedonia
Next Up: Editor's Pick