Why Dropping 'Anchor Baby' Is a Problem for Politicians

Jeb Bush’s recent references to “anchor babies”—meaning certain children of undocumented immigrants, who are granted American citizenship by virtue of having been born within the nation’s borders—have landed the 2016 candidate in hot water, even after his attempt this week to clarify that was referring to isolated cases of Chinese “birth tourism” rather than to Hispanic immigrants. The outraged response was swift. “No matter which ethnic group you’re referring to, ‘anchor babies’ is a slur that stigmatizes children from birth,” California Rep. Judy Chu said in a press release.

Crucial to Bush’s defense of the term is the idea that it’s simply what you call the phenomenon he’s talking about. “You give me a better term and I’ll use it, I’m serious,” he told reporters. But, in fact, the phrase is a relatively recent coinage and, though it might seem cutesy—the type of thing that Stephen Colbert can use to make puns about children who steal microphones from newscasters on live TV—its history is anything but.

Many people trace the idea’s origins to the 1980s, when the term “anchor people” or “anchor children” was used as an epithet for Vietnamese youth whose families sent them to the U.S., with the hope that they could make money and then sponsor relatives back home for citizenship. (When these kids arrived in shabby vessels in Hong Kong, seeking asylum before traveling across the Pacific, locals called them “boat people.”) However, those early uses were not expressing the same idea that’s up for discussion today: the “anchor children” of that era were relatively older refugees, following in the footsteps of countless young people throughout American history who have set up homes in their new nation before helping their families immigrate.

It was years later that the new model of “anchor baby” started to take off, with a new meaning: infants conceived specifically so that their families could somehow benefit from their birthright citizenship. In the mid-2000s, proponents of strict immigration laws used the phrase to make arguments for keeping the doors closed tighter. Mainstream usage was spread by outlets like Newsmax and Fox News giving a larger platform to those voices, according to research documenting that spread. (The anchor baby’s more extreme cousin is the “terror baby,” the hypothetical kid who is birthed in America to more effectively carry out home-grown terrorism later on.)

The term really took hold in 2011, when the American Heritage dictionary sparked a controversy by adding an update with this definition:

The dictionary’s editor said on NPR that they had attempted to “objectively” define the phrase. And it’s true that the two words on their own are each innocuous. Being an anchor can even be a compliment. “There’s nothing specifically about the words themselves that makes them offensive,” says linguist Ben Zimmer, executive producer of Vocabulary.com, “but the idea that people are trying to find a devious way to get into the country by having children here basically dehumanizes everyone involved.” Advocates at places like D.C.-based Immigration Policy Center called the dictionary’s entry “poisonous and derogatory” for lacking the “offensive” label that is attached to definitions of taboo words.

In a few days, the definition was updated:

This about-face stirred debates about who should decide what’s offensive and who shouldn’t. Was an American institution kowtowing to liberals? Or was a dictionary being descriptive about how a word is truly perceived among English-speakers? When Oxford Dictionaries quietly added their definition after that controversy settled, they tagged it with a bright orange offensive label. Those signs are, Oxford editor Katherine Martin says, not chosen by lexicographers making emotional decrees but affixed as guidance for people who want to use the language intelligently.

Often when language gets accused of being offensive, public figures and media shift to more neutral ground, which can lead to some exhausting phrasing. (When the AP banned their journalists from using undocumented immigrant and illegal immigrant, for instance, standards editor Tom Kent suggested to TIME that a more precise description might be “foreigners in the United States in violation of the law.”) Martin says one problem with anchor baby is that there is no natural alternative, overwrought or otherwise—and not for the neutral reason suggested by Bush, whether or not he meant to insult anyone. “There is no neutral term for this because it is a term that is intended to be derogatory,” she says.

One indication of that intention, as the Washington Post‘s Amber Phillips points out, is that the idea it describes doesn’t entirely make sense in practice. As TIME explained in 2011, “the law says the parents of such a child must wait till she is 21 for her to be allowed to sponsor them to live and work legally in the U.S., and research shows that the vast majority of children of illegal immigrants are born years after the mother and father have arrived in the U.S.”

Regardless, the phrase has stuck. And, while debate over its use can actually lead to discussion of important issues like candidates’ positions on birthright citizenship (Bush is for it; Donald Trump, who also uses the term, is against it), that stickiness is just one more reason for conscientious politicians to steer clear of it, says linguist Zimmer. “The difficulty is that those pithy words and phrases are much more memorable and work their way into the public consciousness,” he says. “And once they’re there, they are difficult to dislodge.” 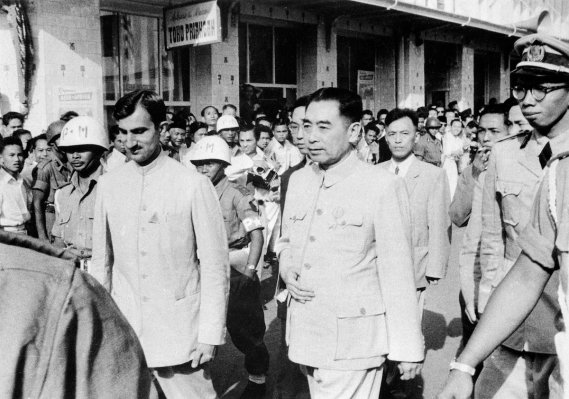 The Origins and Legacy of the Idea of the 'Third World'
Next Up: Editor's Pick