By Sam Frizell and Justin Worland

Donald Trump attacked the most important journalist on Spanish-speaking television in a face-off with Univision’s Jorge Ramos on Tuesday in Iowa, the latest in a series of verbal assaults against journalists by the billionaire presidential candidate.

The latest kerfuffle began when Ramos tried to ask Trump about his immigration plan before he called. Trump responded by telling anchor Ramos to “go back to Univision.”

Earlier this month Trump insulted Fox News anchor Megan Kelly after she asked him tough debate questions, saying she had “blood coming out of her wherever.” This week Trump continued to taunt Kelly, using the word “bimbo” to describe Kelly in tweet and saying he liked her show better without her.

In another spat with journalists, Trump launched into a tirade against the Des Moines Register last month after the newspaper’s editorial board called on him to drop out of the race. In a statement, Trump said the paper had “lost much circulation, advertising, and power” and would “do anything for a headline.”

At a press conference this week, Trump pounced on Ramos as he stood up and asked Trump a question about his immigration plan before he was called. “Sit down. You weren’t called sit down. Sit down.”

“I have the right to ask a question,” said Ramos.

“No you don’t,” Trump said. “You haven’t been called. Go back to Univision.”

As Ramos continued to speak, Trump appeared to glance at his regular, traveling bodyguard and click his lips. The bodyguard then approached Ramos and escorted him out of the room.

When a reporter asked Trump about the exchange moments later, Trump said, “I don’t really know much about him… I didn’t escort him out. Whoever security is escorted him out.”

Trump added “Somebody just walked him out, I don’t know where he is, I don’t even mind if he comes back, frankly… He’s obviously a very emotional person.”

About ten minutes later, Ramos was allowed back into the room, and again challenged Trump on his immigration policy, saying “Your immigration plan is full of empty promises. You cannot deport 11 million people. You cannot deny citizenship to the children. You cannot—”

Trump cut him off. “Why do you say that? Excuse me, no, no. A lot of people think that’s not right, that an act of Congress can do that,” referring to citizenship by birth, a constitutional principle that grants citizenship to children born in the United States.

Trump interrupted Ramos several times, continuing to make his argument. “Excuse me, no. No, no, some of the greatest legal scholars, and I know some of those television scholars agree with you,” he told Ramos as they disputed birth citizenship.

The exchange between journalist and real estate mogul was so tense partly because it centered on one of the most controversial planks of Trump’s candidacy, his immigration platform. The real estate mogul has called for the deportation of 11 million undocumented immigrants and the construction of a 1900-mile wall between the United States and Mexico. Trump’s plan has won him the support of the Republican conservative base, and anger among immigrant advocates, moderates, Democrats and Hispanics.

Ramos has been a persistent critic of Trump, questioning the Republican candidate’s scanty immigration white paper and the expense and chaos that deporting 11 million undocumented immigrants might cause.

Trump defended his plan to Ramos, saying “We’re going to do it in a very humane fashion,” said Trump. “I have a bigger heart than you do.” 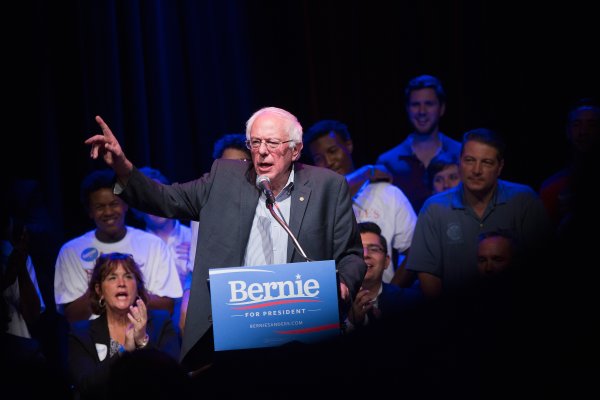 Why Bernie Sanders Won't Add Debates Without Hillary Clinton
Next Up: Editor's Pick