Review: Alex Gibney's Documentary Steve Jobs: The Man in the Machine Pulls Back the Curtain

The ultra-prolific documentary maker Alex Gibney swings at cultural and political icons like they’re piñatas at a lawn party. Some of his smack-downs are painful than others (i.e. the Oscar-winning Taxi to the Dark Side and its indictment of a morally bankrupt military); some are the proverbial fish in the barrel (Lance Armstrong). But despite his slugging percentage and apparent taste for trouble—one of his other movies ​this year ​is about the Church of Scientology (Going Clear)—Gibney knew he was up against something entirely different with his latest subject. A sacred iCow, if you will.

Steve Jobs: The Man in the Machine, which opens in theaters Sept. 4, begins with the Apple founder’s cancer death in 2011. Crowds of mourners, across various international cities, are shown holding up videos of votive candles on their iPads (the disconnect between image and reality being the film’s key theme). On ABC, Diane Sawyer sighs that the passing of Steve Jobs marks one of those moments, “when the whole planet seems to feel a loss together.” On line, Apple-ites are properly stricken. “He made the iMac,” one pre-pubescent techie tells his screen. “He made the MacBook. He made the MacBook Pro. He made the MacBook Air. He made the iPhone … He made everything.”

Well, not quite, as anyone familiar with the Jobs story already knows. But there was, Gibney says, an inseparable association made in the public mind between the machines themselves, and man who made them—perhaps through some manner of sorcery.

Gibney makes the strategically savvy move of injecting himself into his movie, albeit marginally. He admits he loves his iPhone. At the same time, he says that the paralyzing grief felt by some Jobs devotees left him “mystified”—especially since Jobs himself could be so routinely “ruthless, deceitful, and cruel.” Gibney then catalogues just how ruthless deceitful and cruel Jobs could be, in the process scrutinizing Jobs’ virtuosic gift for manipulating minds, media, and, of course, his own image—and creating a parable of power for its own sake.

The “original sin” of Apple, says Atari co-founder Nolan Bushnell, was the deal over Breakout, a game Wozniak developed and which Jobs then took to Bushnell, who offered Jobs a job. Wozniak was unaware that Bushnell had paid Jobs $5,000 for the work; Jobs told Wozniak they’d gotten $700 and gave his pal $350.

The Breakout deal is not, on its own, a crime of epic proportions, but it’s symptomatic of what Gibney finds fascinating/repellent about his subject—a willingness, even a compulsion, to cheat people even when it gained him next to nothing. He denied Daniel Kottke, one of the earliest members of the Macintosh team, any stock in Apple, for no apparent reason. Bob Belleville, a man seemingly traumatized by his time at Apple, says Jobs was always either “seducing you, vilifying you, or ignoring you.” Much later, ​after Jobs had made his enormous fortune, he faced SEC charges over the back-dating of stock options, an episode for which several longtime employees were thrown under the bus, while the Teflon techie himself remained legally unscathed.

Gibney’s film, for all his spelunking into the life of his subject, isn’t perfect: He never got to some of the people he no doubt wanted to, like Jobs’ widow, Laurene Powell, or Tim Cook, the man now in charge of Apple, or Wozniak (seen in archival footage) or any of Jobs’ competitors. Little that anyone might have said or not is more damning than Jobs’ history with his daughter, Lisa Brennan, the child Jobs denied was his until a paternity test proved otherwise. Jobs himself was adopted, making the whole episode—the then-wealthy Jobs begrudgingly paid his ex, Chrissane Brennan (who appears in the film), $500 a month in child support—both repugnant and strange.

Very little of it is news, though, especially to those who might have read Walter Isaacson’s authorized biography, or even those who saw Jobs, the 2013 movie with Ashton Kutcher, a film that went into much more detail than Gibney does regarding Jobs’ tenure at Apple, his departure, his return, his bringing the company back from the dead and his relationships with the likes of John Sculley, the onetime Apple CEO and Jobs’ bête noire.

The Man in the Machine is more interested in the man than the machine. Or its manufacture. And while Gibney never quite puts it into words, his depiction of Jobs as artistic poseur is the really damning part of the story, the part that reduces Jobs to pathos, far more so than all the collected facts about his business chicanery and interpersonal malfunctions. Jobs made many trips to Japan and India as part of his supposed quest for spiritual enlightenment—something he once claim to have attained, at least to his skeptical guru, Kobu Chino Otogawa. He orchestrated those massive “Think Different” ad campaigns, which co-opted the images of truly great humanitarians such Gandhi, Einstein and Martin Luther King, and artists like Picasso, John Lennon and Jobs’ personal hero Bob Dylan, into tacit endorsements of Apple. In one instance, we hear Jobs claiming that the people who worked for him on the various Macs were the people who, in another era, “would have been painters and poets” but instead they were working on hardware, because that was the world we lived in now, and that’s how Steve Jobs wanted to see it.

As rendered by Gibney, Steve Jobs wanted nothing more than to be an artist, and he succeeded—but only in a world where marketing and hucksterism can be considered art. We may, in fact, live in that world. And if so, Gibney says, we have Steve Jobs to thank. 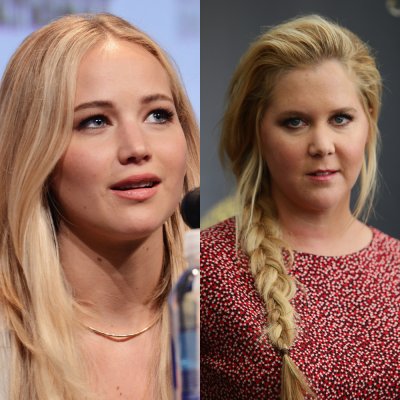 Amy Schumer, Jennifer Lawrence Team Up for Screenplay
Next Up: Editor's Pick