What the U.S. and Cuba Can Learn From the Past

Cuba is about to change. As relations between the United States and Cuba improve, lessons from the origins of U.S.-Cuba relations 200 years ago can help to prevent the island’s tourism sector from becoming a new monoculture akin to the sugar industry. Consider two years in which Cuba was on the verge of a major shift: 2013 and 1790.

In 2013, despite popular commentary on an island “frozen in time,” Cuba was not entirely isolated from the United States. That year, Cuba received an estimated 100,000 visitors from the United States, not counting an additional 470,000 Cuban Americans visiting family. By comparison, approximately 1.6 million American tourists visited the Dominican Republic.

The Cuban tourism sector hosts 3 million visitors each year. Yet the total contribution of travel and tourism to the GDP of Cuba was just 9.8% in 2013, compared to 15.3% in Jamaica and 25.6% in the nearby Dominican Republic. Today, improving Cuba’s tourism sector could be the quickest way to jumpstart the economy, and there are lessons to be learned from the money that was once crystallized from that previous driver of Cuban economic activity: sugar.

In 1790, Cuba was an underdeveloped Spanish colony, important primarily because of its role as a military waypoint for galleons carrying silver and gold from the Americas to Europe. Sugar was the oil of the era, and the Caribbean was the center of production. U.S. merchants were no strangers to Cuba, but the Spanish island was a third-tier destination. That year, the French colony of Saint Domingue and the islands of the British Caribbean produced 80,000 tons of sugar each. Cuba produced just 14,000 tons of sugar.

But then, as now, things were about to change. In 1791, the outbreak of the Haitian Revolution – a successful slave rebellion in Saint Domingue – created economic upheaval, with dramatic consequences for Cuba and the United States. The 2014 announcement by U.S. President Barack Obama that cross-strait diplomacy had finally created an opening to move past decades of geopolitical animosity could have a similar impact.

In 1790, just two percent of Cuba’s arable land was under cultivation. After the start of the Haitian Revolution, a wave of new arrivals, including French planters fleeing Saint Domingue and American and European investors, combined with the liberalization of trade, jumpstarted the Cuban sugar industry, which could short-cut centuries of trial-and-error to immediately adopt the most advanced methods available. Plantations expanded at a frantic, unprecedented pace. The slave trade accelerated, and Cuban planters created a monoculture of sugar production that historians now recognize as an “agro-industrial graveyard” in which enslaved Africans were systematically worked to death.

Today, much of Cuba’s tourism infrastructure is similarly undeveloped. The island’s current supply of 40,000 4 and 5 star hotel rooms are unlikely to be enough to accommodate the hundreds of thousands of Americans who are expected to arrive if U.S. travel restrictions are eliminated. The number of U.S. visitors to Cuba was already up 54% year-over-year in the first half of 2015. The Cuban government’s 2014 call for foreign direct investment to construct several thousand new hotel rooms in areas outside the visitor hubs of Havana and Varadero will not be enough to meet demand.

In fact, however, the same characteristics that have historically made Cuba so attractive to Caribbean traders, smugglers, and pirates – the island’s narrow wedge of strategic ports – also make it perfect for contemporary cruise ships. Cuba’s ports are ideally sequenced along the coastline for day-trips that allow visitors to spend cash without the need for a hotel. This is precisely why numerous cruise ship companies have recently announced plans for Cuban excursions, beginning in late 2015- 2016, and as many as a half million additional Americans are now expected to arrive in Cuba via cruise ships from 2015-2017. This means that the development of Cuban port facilities, shipping regulations, and incentive policies might be more immediately relevant for the Cuban tourism sector than new hotels.

Yet, although cruise ships could help to solve Cuba’s immediate supply capacity constraints and inject cash into the Cuban economy, travelers will expect improved infrastructure. For tourists, even cruise ship tourists, infrastructure matters, and in many sectors – as in 1790 – Cuba can benefit by starting from scratch. Seventy-five percent of paved roadways in Cuba are in extremely poor condition, and it is estimated that the island may need as many as 1.6 million additional dwelling units to support its population. Rail and water/wastewater treatment are in various states of decay and disrepair; fixed-line phone services experience frequent outages; the Internet is virtually nonexistent; and the oil-importing energy sector, like much of the island, is ripe for a makeover.

It wouldn’t be the first time. From the 1790s – 1830s, Cuba underwent one of the most significant economic development projects in history, with a massive expansion of roads, ports, sanitation, and railroads, funded by taxes and foreign investment – all to support sugar production. Within a generation, Cuba became the world’s largest sugar producer and the second-largest trading partner of the United States. By the 1820s, for example, the price of slaves in Havana correlated directly with the price of sugar in New York. From the start, U.S. foreign policy, including the Monroe Doctrine, encouraged the expansion of the Cuban slave regime for the sake of America’s own inter-dependent growth. Slavery would not be abolished in Cuba until 1886; its legacy persists today.

A rush to jumpstart the Cuban tourism sector could have consequences that are just as significant. Located just 90 miles from the large U.S. economy and Cuban Diaspora, Cuba could be attractive to investors interested in quick profits or uncertain development initiatives. U.S. and Cuban stakeholders should remain wary of anything that hints at a new economic monoculture to support tourism at the expense of sustainable, equitable internal development. Across sectors, they should begin with the best technologies and top experts, and encourage first-hand travel and engagement on both sides. Lessons from the origins of U.S.-Cuba relations offer a cautionary tale, and a way forward – a way to create prosperity in Cuba that benefits both nations. For the first time in 200 years, the United States and Cuba now have the opportunity to begin again.

Stephen Chambers attended the University of Chicago and received a Ph.D. in history from Brown University. He is the author of No God But Gain: The Untold Story of Cuban Slavery, the Monroe Doctrine, and the Making of the United States (Verso Books, September 2015). 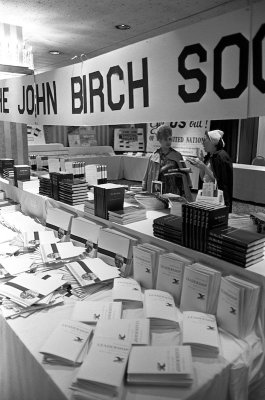 The 'Zealot' Who Gave the John Birch Society Its Name
Next Up: Editor's Pick