Pierce Brosnan at the premiere of the film No Escape, in Los Angeles on Aug. 17, 2015.
Danny Moloshok—Reuter
By Devan Coggan / Entertainment Weekly

Daniel Craig’s fourth turn as James Bond — hasn’t even hit theaters yet, but there’s still plenty of speculation about what the next iteration of the iconic spy might look like. In a new interview withDetails magazine, former 007 Pierce Brosnan discussed the character’s future and whether or not there will ever be a gay Bond.

“Sure. Why not?” Brosnan said. “Actually, I don’t know how it would work. I don’t think Barbara [Broccoli, the Bond producer] would allow a gay Bond to happen in her lifetime. But it would certainly make for interesting viewing. Let’s start with a great black actor being James Bond. Idris Elba certainly has the physicality, the charisma, the presence. But I think Daniel will be there for a while yet.”

Brosnan, who grew up outside of Dublin, also weighed in on Ireland’s recent legalization of gay marriage, saying, “I never thought in a million years, but hallelujah! Enough of the shaming. It’s a great indication of the forward-thinking of a nation that’s been so mangled by religion.”

In the wide-ranging interview, Brosnan discussed everything from cosmetic surgery to who he most wants to work with (Robert De Niro), and he even revealed why he turned down a chance to play the Caped Crusader.

“It was the beginning of these huge movies, and I just thought, Batman?” Brosnan said. “Batman held such an indelible place in my own childhood, but I said something flippant to Tim Burton, like, ‘Any guy who wears his underpants outside his trousers cannot be taken seriously.’ So yeah.”

Brosnan, who stars alongside Owen Wilson in the upcoming No Escape, also talked about the devastating fire at his California home in February, which destroyed his Aston Martin.

“I looked into the garage, and the car cover was engulfed in flames,” he said. “In that nanosecond, you think, Do I try to save it? But it’s a car. You take the blow and move on, give thanks you’re alive.”

For more, head to Details. 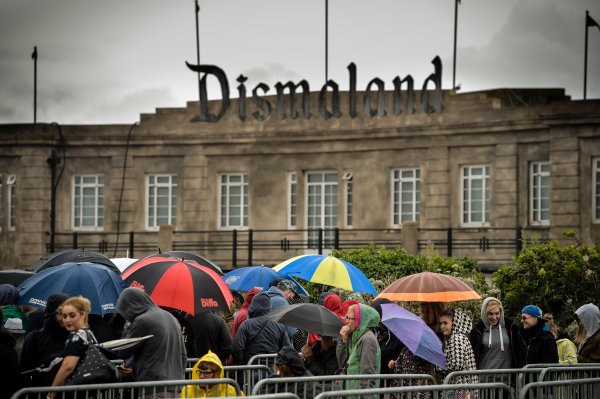 Banksy's 'Dismaland' Trailer Is Bemusing
Next Up: Editor's Pick