A flock of two dozen mad-as-hell supporters of Donald Trump agreed to assemble on Monday night in a political consultant’s office to explain their passion for the Republican frontrunner. Gathered in a corporate-looking room with the shades drawn, they railed against Washington politicians who hire consultants, and sang their admiration for the one presidential candidate who promises to go his own way.

“I think America is pissed. Trump’s the first person that came out and voiced exactly what everybody’s been saying all along,” one man said. “When he talks, deep down somewhere you’re going, ‘Holy crap, someone is thinking the same way I am.’”

Frank Luntz, a fast-talking Republican pollster who frequently appears on television and writes newspaper op-eds, urged them on. When did you first decide you liked Trump? he asked. And why are you mad as hell?

“When Trump talks, it may not be presented in a pristine, PC way, but we’ve been having that crap pushed to us for the past 40 years!” said another man. “He’s saying what needs to be said.”

This 29-person focus group, conducted by Luntz and observed by a group of national press reporters from behind a pane of one-way glass, had gathered to explain the phenomenon of Trump. Why is a billionaire real estate mogul, TV celebrity and oft-accused demagogue who has never held office leading the Republican field with some 22% support in the polls?

After the first Republican debate, Luntz had held a similar focus group of likely Republican voters that found Trump had performed poorly. In trademark fashion, Trump responded by attacking Luntz on Twitter at 3:28 a.m. the following morning. “@FrankLuntz is a low class slob who came to my office looking for consulting work and I had zero interest. Now he picks anti-Trump panels!” Trump wrote.

Luntz’s firm paid each of the participants $100 for the two-and-a-half hour session. (They wore tags with their first names that were mostly illegible to reporters behind the glass.) The group was not a representative sample of the Republican party, or early state voters, as all of them had been selected because they like (or love) Trump and live in Washington or its suburbs in Maryland and Virginia. But they offered a glimpse into the Trump mystique, a lucrative brand whose success has caught the national media, the Republican establishment and experienced pollsters like the veteran Luntz off guard.

The Donald devotees sang a contrapuntal tune, simultaneously a dirge to national decline and an ode to Trump. They believed Washington politicians and the Republican party had repeatedly misled them, and that the country is going down the tubes. They looked for relief in Trump.

“I used to sleep on my front porch with the door wide open, and now everyone has deadbolts,” one man said. “I believe the best days of the country are behind us.”

“I’m frustrated beyond belief. I feel like I’ve been lied to,” a woman said. “Nothing’s getting better.”

Many sounded like relations of an ill patient, furious that all the previous doctors have botched a test or fumbled the scalpel. To them, Trump actually is the real-deal fixer-upper, and he is going to make America great again.

The focus group watched taped instances on a television of Trump’s apparent misogyny, political flip flops and awe-inspiring braggadocio. They watched the Donald say Rosie O’Donnell has a “fat, ugly face.” They saw that Trump once supported a single-payer health system, and they heard him say, “I will be the greatest jobs president God ever created.” But the group—which included 23 white people, 3 African-Americans and three Hispanics and consisted of a plurality of college-educated, financially comfortably Donald devotees—was undeterred.

At the end of the session, the vast majority said they liked Trump more than when they walked in.

“You guys understand how significant this is?” Luntz asked the press breathlessly when he came back into the room behind the glass. “This is real. I’m having trouble processing it. Like, my legs are shaking.”

“I want to put the Republican leadership behind this mirror and let them see. They need to wake up. They don’t realize how the grassroots have abandoned them,” Luntz continued. “Donald Trump is punishment to a Republican elite that wasn’t listening to their grassroots.”

The group said Trump has their best interests in mind, while other Republicans are looking out for themselves. “We’ve got to show the Republicans that we’ve had it with them, that we will not be there every single time. They treat us like crap and they lie to us and promise us things and then they expect us to vote again,” said a Republican woman. “That’s why we want Trump.”

The crowd in the room was angriest about national security. Nearly all of them, it appeared, had an unshakeable feeling that U.S. border was porous as a sieve and that the very things that once defined the nation: army, border and national pride—were fading. They complained of America’s reduced standing in the world, and Obama’s apparent ineptitude in challenging Russia, Syria and ISIS.

When the group listened to a clip of Trump claiming that as president “the military is going to be so strong” that “nobody is going to mess around with the United States,” nearly everyone registered approval on their dial meters of 100—a seldom occurrence among focus groups.

“We love our country and we love what our country stands for,” said a woman who added she comes from a military family. “I look at where we are now as a country where entitlements are just totally out of control. Our borders have completely dissolved. We’re not what we used to be. I want to people to represent my interest.”

Trump’s unapologetic focus on strengthening the border—he wants to build a wall and deport all 11 million immigrants before letting many back into the country—excites many conservatives, as well as some who don’t traditionally vote Republican. Though he has announced scant specific plans, Trump has said he will expand the military, commit to veterans, and take a tough line on dealing with China and Iran.

“He’s not afraid,” said a woman who voted twice for Obama. “He keeps prodding on even if people give him negative press. He doesn’t change and apologize.”

Much of Trump’s support in the room seemed to stem from a weakness in the Republican party. The 2014 midterms did not usher in the conservative renaissance Republicans expected. Obamacare has still not been repealed, Congress is looking less likely to override a veto on the Iran deal, and there are still 11 million illegal immigrants in the United States.

The group of 29 went around the room, each supplying a single adjective for the legislative body that let them down after the 2014 elections. Congress “does nothing.” It’s “too old.” “Useless.” “Lame.” “Inept.” “Wrong party.” “Cocktail party.” “Gridlock.” “Costly.” “Sold out.” “Sucks.” “Douchebags.”

Congress’ failures were Trump’s gains. The worse Congress and everyone else falls, the more the businessman has to gain. These supporters were evidence that Trump is winning by a new political paradigm, where disappointment and enchantment go hand in hand. 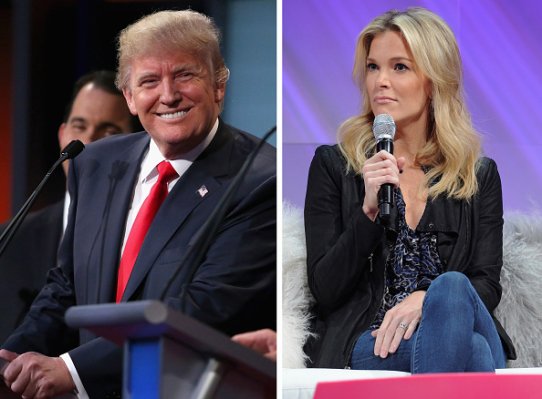 Trump Attacks Megyn Kelly as She Returns to TV
Next Up: Editor's Pick