In a statement to TIME, Walker said it was time for the Obama administration to hold China “accountable” amid accusations that the country was behind the hack of the U.S. office of personnel management in which more than 20 million records were breached.

“There’s serious work to be done rather than pomp and circumstance,” Walker said, encouraging Obama to show “backbone.”

The White House is facing bipartisan pressure to get tougher on China. The president last hosted Xi at the Sunnylands retreat in Palm Springs, CA in an informal meeting in June 2013. Obama met with Xi in China last year when they announced a major climate accord.

Earlier Monday, Walker blamed much of the recent drop in the financial markets on China’s recent currency devaluation.

“Americans are struggling to cope with the fall in today’s markets driven in part by China’s slowing economy and the fact that they actively manipulate their economy,” Walker said. “Rather than honoring Chinese President Xi Jinping with an official state visit next month, President Obama should focus on holding China accountable over its increasing attempts to undermine U.S. interests. Given China’s massive cyberattacks against America, its militarization of the South China Sea, continued state interference with its economy, and persistent persecution of Christians and human rights activists, President Obama needs to cancel the state visit.”

Cancelling a state visit would be a major snub for the Chinese leader, who has made earning recognition for a “new type of major power relationship” between his country and the U.S. a priority of his.

Walker’s comments come as GOP front-runner Donald Trump has made criticism of China a focal point of his campaign. Walker rejected the notion that he was toughening his stance on China in response to Trump.

“Obviously the timing today coincides with concerns on the stock market about what has happened over the last couple of weeks with the efforts by China to devalue their currency,” Walker told reporters after a campaign stop.

Walker said he was unconcerned about the impact such a snub would have on the relationship between the U.S. and its largest overseas creditor. “I think China as well as others in the world will finally respect some leadership once and for all from the United Stares,” Walker said. “Part of the problem now is that they don’t respect us.”

“Those honors should only be bestowed on leaders of countries that are allies and supporters of the United States,” Walker said of the planned state visit and state dinner. 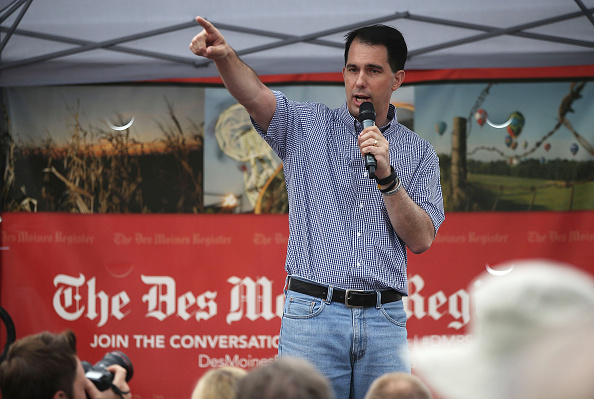