There’s a lot riding on Samsung’s latest smartphones, the Galaxy S6 Edge+ and Galaxy Note 5. Ever since the South Korean company hit a bit of a rough patch early this year it’s been looking for ways to improve its bottom line. Meanwhile, profits at the company have declined for seven straight quarters, forcing it to cut prices for its Galaxy S6 and S6 Edge.

Samsung is in dire need of a hit device to put the company back on a path towards rising profits, which is hopefully where the Note 5 and S6 Edge+ can help. For the past week I’ve tested both devices, using them non-stop to snap photos, capture videos, and do all the things you’d normally do on a smartphone. And you know what? These devices just might be what Samsung’s looking for.

As noted in a previous story, the company will no longer offer smartphones equipped with microSD card slots and removable batteries and instead offer devices made from svelte aluminum and glass; much to the chagrin of its most faithful of users.

The S6 Edge+ and Note 5 were each crafted with a different type of consumer in mind. The S6 Edge+ is for those who like to watch videos and play games thanks to the immersive experience its curved display lends itself to. Meanwhile, the Note 5, as its lineage dictates, is aimed directly at those who want a productivity device, complete with a stylus for jotting notes and sketching ideas.

Storage options are limited to 32- or 64-gigabytes for both devices, again, with no option to add storage via a memory card. The lack of storage is a confusing omission when looking at the Note 5, a device that’s made a name for itself as a productivity-first device.

Is one device better than the other? It depends on how you plan on using it. I suspect the majority of users will opt for the S6 Edge+ due to its curved design. The S6 Edge+ is lighter and thinner than the Note 5, and overall just feels easier to hold.

The Note 5 was more to difficult hold on, an issue that’s undoubtedly a byproduct of it’s 5.7-inch, but also an unfortunate side effect of its design (and despite the fact the back of the Note 5 is curved in a similar fashion to that of the screen on the S6 Edge+).

The S6 Edge+ is equipped with the same screen size as the Note, and is .7 millimeters thinner on the spec sheet.

Both devices are equipped with Samsung’s 2.1 GHz Exynos 7420 64-bit octa-core processor, which translates into a fast experience. Apps were always fast to open and close, with no discernible delay. Even after a full day’s use of installing, loading, and customizing over 50 applications, neither device showed signs of slowing down.

The only time I briefly experienced a slight slowdown was when using Samsung’s multi window feature, which allows two apps to run at the same time in a split-screen orientation.

When Samsung launched both devices at its Unpacked event it failed to include one word: TouchWiz. The term refers to Samsung’s divisive proprietary software that runs atop Google’s Android platform, adding features and customization options.

Unfortunately, the omission wasn’t an indication the company had decided to walk away from the interface. The software is still present, for better or worse, and still a hindrance.

For example, S Voice is the company’s digital assistant, much like Apple’s Siri, and responds to voice commands. After summoning your personal assistant, you can ask it for weather updates or to set reminders.

The setup process for S Voice requires you to set your own activation phrase, repeating it several times to train your device. In my case, I opted for “Hey Edge” to beckon its attention. Only, I rarely was able to activate it on first try. Unfortunately, many times the device had no reaction. How did I figure out if I needed an umbrella? I asked Google instead, and it responded nearly every single time.

Compounding the frustrating experience, S Voice would randomly turn on. I can only assume the device thought that it heard my personalized “Hey Edge” command from something on TV or radio, and that whatever it heard did a better job at sounding like me than I did.

Inconsistent experiences such as what I experienced with S Voice are found on both devices’ software. Thankfully, however, most of it can be disabled.

Samsung put the same 16 megapixel sensor from its previous generation phones in its Note 5 and S6 Edge+.The result means performance is the same, but the larger screens make it easier to frame and setup photos.

Low-light performance was a weak spot, as it is with most smartphone cameras. Instead of grainy photos, however, both devices struggled with capturing the proper white balance. In comparison, the iPhone 6 offered up grainy photos with better balance.

The Note 5 and S6 Edge+ are each equipped with a 3,000 milliamp-hour battery. The size may be a disappointment to some, given the battery is smaller than the Note 4 and no longer removable, meaning users can’t simply replace a dead battery with a fully charged spare when needed.

Unlike my experience with Samsung’s smaller flagship devices, the battery life on the Note 5 or S6 Edge+ was a non-issue. I failed to completely deplete either battery throughout the day, in spite of heavy use.

At one point I forgot to place the Note 5 on its charger before bed, and when I woke the battery was at 16%. Normally when this happens—and I think we’ve all been there—you charge your device while you get ready for the work day, and leave the house with a half-charged battery.

However, I plugged the Note 5 in and 15 minutes later the battery had an extra 25%; another 15 minutes later I was nearing 60%. Samsung’s integration of Qualcomm, a quick-charging technology for devices, is an invaluable feature.

Unfortunately I wasn’t able to test Samsung Pay on either device during the review period, but the beta is scheduled for launch this month.

Both devices are equipped with the required hardware and—according to Samsung—already contain the software needed to use the mobile payment service once it’s available (users will still need to download the Samsung Pay app to enable it, rather than wait for a software update as is the case for S6 and S6 Edge owners).

If Pay works as advertised, it has the potential to be one of the increasingly rare features capable of changing smartphone use through its ability to work with both standard credit and debit card terminals and NFC readers.

Both devices are available starting August 21 across all four major U.S. carriers, plus U.S. Cellular. Pricing is carrier dependent, but most are offering the device at $700 for the 32GB Note 5. Full retail pricing of the 32GB S6 Edge+ is in the neighborhood of $770. Though some carriers such at AT&T still provide the option to sign a two-year contract, putting the cost below $300 for either device.

Samsung’s latest devices carry a steep price tag in a market that’s increasingly seeing quality Android devices hit the market at cheaper prices, and with the added benefit of no contract or monthly payments. For example, the OnePlus 2’s most expensive model is $390, while Motorola’s $399 Moto X will soon be available.

The Samsung Galaxy Note 5 and Galaxy S6 Edge+ are the best Android smartphones I’ve ever used. Their large, vibrant displays were a joy to look at. I even began to appreciate the curved screen of the S6 Edge+, a departure from the my feelings after using the S6 Edge.

The fingerprint reader is fast, and most importantly, reliable. The camera is one of the best I’ve ever used on a smartphone, giving me pause each time I pulled out my iPhone to snap a photo. The battery offered enough power to get me through an entire day of heavy use.

If I was asked to pick between the S6 Edge+ or the Note 5, I’d be inclined to pick the former. The curved display doesn’t offer any true advantage other than making the device easier to grip, and the Note 5’s biggest differentiator (and only feature worth nothing) is its stylus. Outside of that, both devices offer the same software and hardware experience. 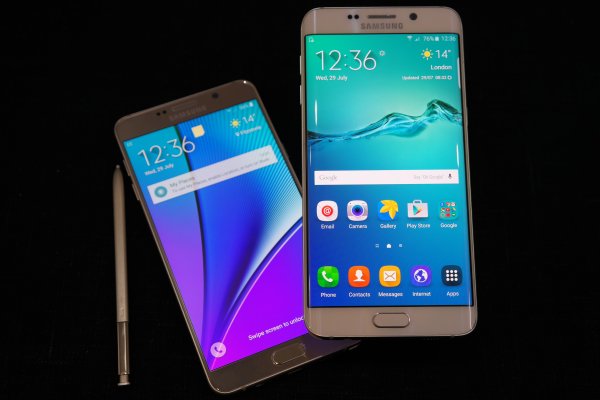 Hands On With Samsung's Newest Phones
Next Up: Editor's Pick