In 1955, when 14-year-old Emmett Till traveled from his home in Chicago to stay with a great-uncle in Tallahatchie County, Miss., his mother was nervous. Though the world was changing — the Brown v. Board of Education decision had come the year before — the Deep South was still a dangerous place to be black. Till’s mother, Mamie Till Mobley, who had grown up in the rural county (a “snake-infested swamp,” as TIME described it that year), warned him of the risks. She told him “to be very careful… to humble himself to the extent of getting down on his knees,” per TIME.

“Living in Chicago,” she explained at the trial of his murderers, “he didn’t know.”

The teenager was abducted at gunpoint from his great-uncle’s home on this day, Aug. 28, 60 years ago, by two white men who accused him of having whistled at a white woman in a grocery store. His body was found in the Tallahatchie River three days later. He had been brutally beaten and shot in the head.

An all-white jury acquitted the defendants (the husband and brother-in-law of the woman who complained about Till), who later confessed to the killing in a raw, unremorseful interview with Look magazine. One said that they had intended only to beat the teen, but decided to kill him when he showed no fear — and refused to grovel.

Because Milam and his accomplice had already been tried once for Till’s murder, the public confession did not yield more charges. But it provoked national outrage and became as powerful a catalyst in the civil rights movement as Rosa Parks’ refusal to give up her bus seat just a few months later. As the Los Angeles Times later put it: “If Rosa Parks showed the potential of defiance, [some historians] say, Emmett Till’s death warned of a bleak future without it.”

Sixty years later, at a time when race relations are once more at the front of the American mind, Till’s name is still invoked as a reminder of the worst consequences of ignoring the problem. Not coincidentally, his story has inspired a resurgence of interest from historians and scholars as well as from TV and movie producers. Jay Z and Will Smith recently announced that they are collaborating on an HBO miniseries about him; Whoopie Goldberg is working on a film called Till, scheduled to begin production next year; and two more films are in the works, based on the book Death Of Innocence: The Story Of The Hate Crime That Changed America and the play The Face of Emmett Till, respectively.

Both the book and the play were co-written by Till’s late mother, who became a prominent civil-rights figure following her son’s funeral, when she insisted on an open casket so the world could see what had been done to him.

Read TIME’s original 1955 coverage of the Emmett Till case, here in the archives: Trial by Jury 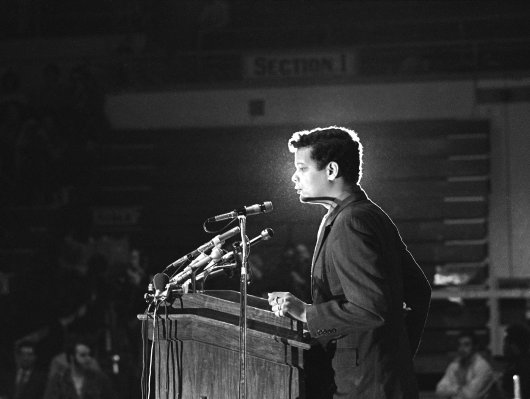 See Julian Bond's Life in Photos
Next Up: Editor's Pick